Album Review: Dream Wife, ‘So When You Gonna…’ 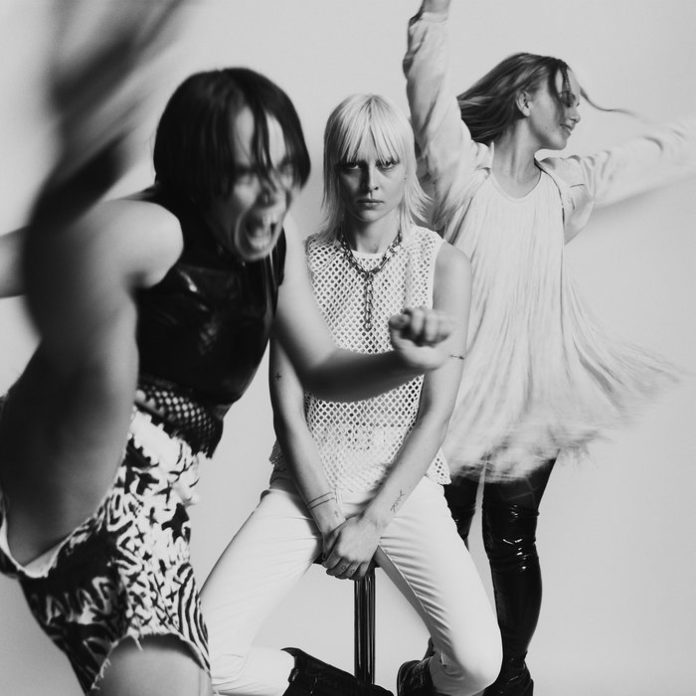 It’s been two years since Dream Wife blasted into the mainstream. In 2018, the all-female band crashed into the spotlight following the huge critical success of their euphoric self-titled debut. The trio, built up of vocalist Rakel Mjöll, Alice Go on guitar and Bella Podpadec on bass, create the musical equivalent of getting your front door kicked down with one big THUD of a neon-pink Doc Marten.

The group cite a multitude of influences, combining the trail-blazing energy of pop provocateurs such as David Bowie, Madonna and Debbie Harry with the crashing guitars and acerbic wit of all-female punk bands like Bikini Kill and The Slits. The resulting sound is somewhere glorious between the glittering punk-pop of The Yeah Yeah Yeahs and the sexy garage rock bravado of The Strokes.

Considering their huge success, it’s hard to believe that Dream Wife didn’t initially set out to be, well, real. The three women became friends while studying art at Brighton University in 2014 and originally formed a fake girl band for a performance project. First came the band-name: borrowed from a 1953 romantic-comedy, the name Dream Wife mocks the concept of the 1950’s housewife that reduces women’s identities to a sexist ideal while reflecting the feminist, convention-smashing sentiments that Go, Mjöll and Podpadec planned to unleash through their music.

After writing songs, creating a Spinal Tap style mockumentary and performing for an exhibition opening, they realised that Dream Wife had the potential to be more than just a project. After a stint playing local parties around Brighton’s art scene, they decided to use the band as an opportunity to travel, leaving the UK’s South Coast for a DIY tour of Canada. Playing their irresistible fusion of indie/punk/pop Dream Wife’s performances were raucous, euphoric, female-focused affairs that earned them a reputation as an explosive live-act. Within the next few years, they got themselves signed to an indie label, released the coolest album of the year and graced the cover of NME.

So When You Gonna is a continuation of Dream Wife’s mission to use their electrifying music as a means to scrutinize today’s society and to champion the rights of womxn. Just like their debut, So When You Gonna is bursting with youthful female energy, gleeful rage and razor-sharp wit, but this time round, the band have opted for a more nuanced approach to punching the patriarchy. From song to song, tone, mood and speed shift drastically – a big change when compared to the relentless high-energy blitz of album one. There’s an earnestness that suggests the band have allowed themselves to slow down and to reflect on not just societal weaknesses, but personal ones, something that’s almost unimaginable following their audacious ‘all guns blazing’ debut.

‘Validation’, for example, is a relatively stripped-back song, fuelled predominantly by Alice Go’s catchy guitar hook and a neurotic stream of consciousness where Mjöll agonizes over the need to feel validated by relationships. There’s a distinct absence of the band’s trademark noisiness, which some fans may find disappointing. ‘Hasta La Vista’, a mid-tempo bop that begins with a Blondie style bassline and ‘U Do U’, a straight-forward break-up ballad, follow suit. Though these songs are bolstered by their intelligent lyrics and Mjöll’s self-aware delivery, they don’t quite have the structural ingenuity or exciting instrumentals that you would expect from such a phenomenal group of rabble-rousers.

However, ‘Temporary’ and ‘After The Rain’ are slower songs that really impress. ‘Temporary’, which starts off with a nice little beat and a catchy yet interesting melody, turns out to be so much more than it seems, emerging as an astonishingly graceful and poignant song about miscarriage, a rare find that displays Dream Wife’s huge capacity for empathic and emotionally astute writing. ‘After The Rain’, the album’s final track, is another powerful song that tackles a subject that is inextricably linked to womanhood: abortion and the fight for the freedom to choose. In the chorus, Dream Wife’s message is loud and clear as Mjöll sings “It’s my choice, my life / It’s my will, my sacrifice / It’s my body, my right / Not for others to decide”. A stripped back piano and guitar instrumental and an absence of drums highlights the rallying cry echoing through the air. For a band that established itself with a swathe of defiant punk party tunes, this emotional protest anthem is a refreshing and well-executed change of pace. There’s no room for wry smiles or raised eyebrows where this issue is concerned; this is Dream Wife’s plea for humanity.

So you might be wondering, “With all this sincerity… Is Dream Wife still the barrel of hedonistic punk-rock hits that I know and love!?” And the answer is ‘Sports!’, track number one on the album. The opening lyrics, “Fuck sorry, fuck please, will you so kindly start again?” set the scene. Alice Go shreds a punk-rock riff and the chorus bursts in with chants of “Now put your money where your mouth is!” See? Fun. A mischievous yet good-natured parody of the hyper-masculine world of sports follows. Then there’s ‘Homesick’, a proudly lewd song filled with shrieks, whispers, and screeches of feedback, and ‘Old Flame’, a quirky, bouncy track which boasts infectious vocals and a cool, twitching bassline led by Podpadec. But if you’re really looking for a ‘return to form’, then look no further than title track ‘So When You Gonna’. Beginning in a scream of “When you gonna kiss me!?” accompanied by heavy guitar shredding and crashing drums, the song builds to a crescendo again and again as Mjöll spews what’s on her mind in goading, candyfloss vocals. It’s exhilarating stuff. Naming the album after this anthemic hit rather than after one of their more hard-hitting songs emphasizes that, though the band may have decided to approach their songwriting from new and, at times, more serious angles, Dream Wife definitely haven’t lost their love of being loud, provocative and wildly entertaining.

Album Review: Dream Wife, 'So When You Gonna...'It’s been two years since Dream Wife blasted into the mainstream. In 2018, the all-female band crashed into the spotlight following the huge critical success of their euphoric self-titled debut. The trio, built up of vocalist Rakel Mjöll, Alice Go on guitar and Bella...