Following the announcement of Beyoncé‘s new visual album Black is King, the singer has now unveiled a new trailer as well as fresh details about the project. The new teaser features appearances from Beyoncé, JAY-Z, Kelly Rowland, Naomi Campbell, Tina Knowles-Lawson, and others. According to a press release, Pharrell Williams and Lupita Nyong’o will also appear in the film. Check out the visual below, along with the project’s poster.

Written, directed, and executive-produced by Bey, the album is set to premiere on Disney+ on July 31 and is connected to Beyoncé’s previous collaboration with Disney on last year’s The Lion King remake and The Lion King: The Gift soundtrack. The film was shot in Los Angeles, New York City, London, the country of South Africa, West Africa, and Belgium, and features contributions from directors including Emmanuel Adjei, Blitz Bazawule, Pierre Debusschere, Ibra Ake, Dikayl Rimmasch, Jake Nava, and Kwasi Fordjour. 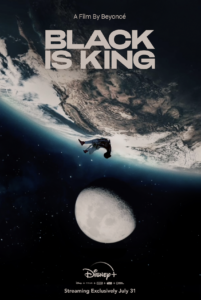