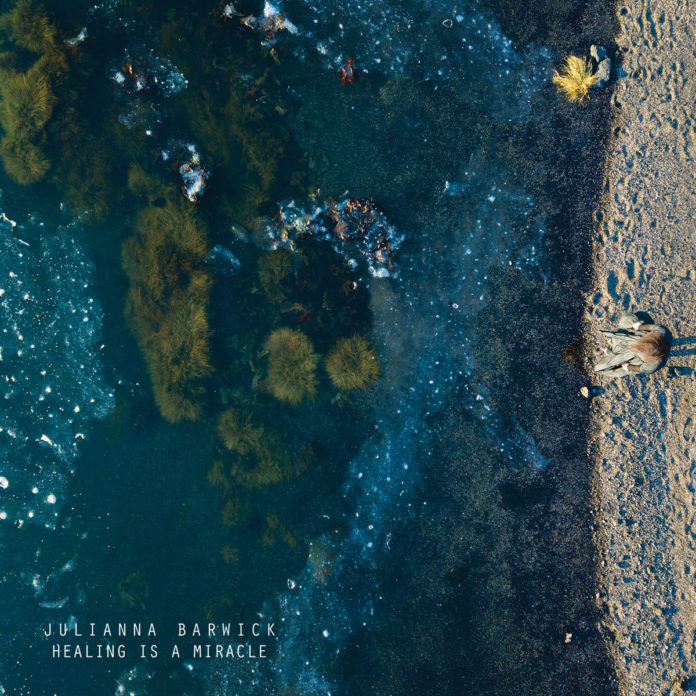 It doesn’t take long for the gates of heaven to open on singer, composer, and producer Julianna Barwick’s fourth studio album, Healing is a Miracle. About two minutes into the opening track ‘Inspirit’, a low bass enters the mix, and the light comes pouring in like rain after a long period of drought. A moment like this can often feel artificial or overly dramatic, but here it flows naturally, inviting the listener to ascend to the skies along with it. Barwick’s music has always had a spiritual quality about it, though one that eschews any notion of religion and tends to negotiate rather than blindly embrace any kind of connection to the spiritual world. But with 2016’s beautiful, introspective Will, it seemed like Barwick might be turning more inward than heavenward. Listening to her new album, infused as it is with her signature blend of layered, celestial vocals and textured, ever-evolving synths, it becomes crystal clear: spiritual transcendence is just one of many revelations the album has to offer.

Barwick’s music requires patience, but that has always been one of its unique charms. Unlike a lot of ambient music – even great ambient music – it never fades into the background, capturing your attention with subtly unfolding harmonies that serve as proof that worldless music can tell its own story, one that can be as deeply if not more evocative. If you’ve ever been present in one of her live shows – well, it’s impossible not to be present, not to marvel at how the layers of reverb unfurl and each note is looped until it has reached an entirely different point in its trajectory, as if it’s a living, breathing thing. All of this can be found on Healing is a Miracle, but her latest might also be her most accessible album – clocking in at just 34 minutes, it’s both grounded and expansive, reaching altogether new heights.

It might be because we need music like this more than ever, or it might be because this is her first new material in four years, but Barwick’s music has never felt this vital, this genuinely transportive. On ‘Oh, Memory’, the incantation that gives the track its title is enough to conjure a million different images, Barwick’s hypnotic choral chant sitting atop a bed of gentle, trickling strings courtesy of Los Angeles-based harpist Mary Lattimore. A basic melody is repeated throughout, but it’s buried so far back in the mix that what could have made for a memorable tune in another context becomes a ghostly figment. The ability to project your own memories onto a song is part of the magic, but while music that engages the listener in this way often risks being insubstantial itself, Healing is a Miracle feels fully-realized from start to finish.

If tracks like ‘Healing is a Miracle’ and ‘Safe’, though as mesmeric as any one of Barwick’s compositions, feel like they bring little new to the table, there’s enough variation throughout the tracklisting to prevent it from sounding too familiar. In some cases, these new ideas come in the form of a collaboration, like that with Mary Lattimore, or with experimental hip-hop producer Nosaj Thing on the propulsive closer ‘Nod’. But it’s the one with Jónsi of Sigur Rós on centerpiece ‘In Light’ that stands out the most – the earthshaking percussion provides some weight to the track, allowing Jonsí and Barwick’s euphonious harmonies to soar against it; quite literally like a match made in heaven. ‘Flowers’ is the biggest left turn here, and it pays off; Barwick’s voice becomes hauntingly disquieting as it’s pushed up to its highest register, while that wobbling distorted bass that was introduced earlier starts to loom over it to nightmarish effect.

As soothing as Barwick’s arrangements can be, it’s moments like these that reveal the humanity and nuance that lie behind it. Healing is a Miracle is not so much music for healing as much as it an attempt to map the never-ending journey towards it, and the album reaches some truly wondrous places as it traverses across these emotional reams. The only two lines on the album are profound enough to encapsulate that whole experience and leave a lasting impact long after they’ve been uttered: “Open your heart,” she sings on opener ‘Inspirit’, “It’s in your head.” It’s a simple mantra, one that’s at the very core of Barwick’s music. It might not have the power to open the gates to heaven, but it might just open your heart. And that’s nothing short of a miracle.