A Look Into Bojack Horseman 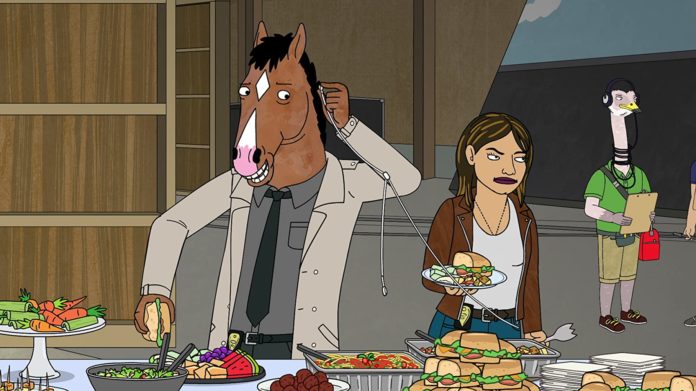 BoJack Horseman is a popular Netflix TV series. It first aired in August 2014 and since then has produced 6 successful seasons. While at the start the whole TV series gives the vibes of something very much close to our hearts and souls like Family Guy, The Simpsons, or Futurama, at some point it took a turn. A deep turn.

The story revolves around a humanoid horse. Reverse centaur with the body of a male but the head of a horse. He was a star of a show in the ‘90s sitcom where he played as an adoptive father of three kids. It was a major hit however met an abrupt end due to cancellation. The actual TV series starts 18 years from this incident where BoJack decides to make a spectacular comeback into show business.

It goes without saying that after this point there will be some spoilers. If you are still pondering about whether to watch the series or not – we do recommend it. It is an awesome experience with quite heavy plot twists in the middle and a very unique and strong perspective about alcoholism, drug addiction, depression, gambling, and other serious ordeals of adult life. Anyhow, it goes without saying that the show is not for children. The tone itself is very humorous however due to the dosage of strong feelings that the series is awakening in the hearts and souls of the audience it is something everyone should try.

It is a rollercoaster. In 6 seasons BoJack manages to become an alcoholic, get severely and clinically depressed, hurt people with disabilities or terminal illnesses, give teens booze, almost sleep with the underaged, sink other people’s careers to boost his own, and even manages to leave someone to die. However, even though all of this the main character manages to be extremely relatable and strangely – human. Depression in particular is depicted really well within the TV series and is one of the main draws for a lot of people who watch it.

One of the most crucial moments of the show is when BoJack is playing the main role in the movie called Secretariat. The story follows an independent-minded young horse who wants to become a professional runner. He takes up this career to “run away” from the abusive family he grew up in. Unfortunately, Secretariat meets his end by his own hands via suicide. However, it is widely believed in the community that he was actually murdered by his trainer to cover up his gambling addiction.

Gambling is one of the biggest problems all across the world at this moment. This has been the main focus of lots of different TV shows, movies, books, etc. However, BoJack, who is a den of psychological problems, is surprisingly not that much into gambling. Lots of people in the past kept covering things up, however, the modern world has turned tables on such issues with the introduction of online gambling. Canada is one such country where more than 500,000 people are considered to be having problems with gambling. Even though lots of countries permit it the idea is that there is much less chance of getting caught by your family or loved ones in the process of gambling when you can just open your smartphone and have fun with online blackjack in Canada or anywhere else in the world. Even though BoJack Horseman TV series does not speak about this issue openly, the potshot is still being taken with the underlying cause of death of the Secretariat. It is an extremely important touch for us as the communities not only in Canada but across the globe are struggling with such issues. However, it is a good opportunity gone to waste as this heart-wrenching possibility could’ve been much more deeply explored.

Apart from this, there are quite a few other relatable characters like work-obsessed princess Carolyn, or ever happy Canadian Mr. Peanutbutter, Sarah Lynn – drugs and party obsessed teenager with strong parent issues, or just an extremely lucky but also good for nothing Todd Chavez, as well as one of the stars of the show Vietnamese American Diana Nguyen who plays a pivotal role in the development of BoJack’s character as well as the whole series. The cast makes it so that everyone can find someone from their friend circle to identify with the characters and Bojack himself is extremely relatable for anyone who had anything to do with addiction and depression.

As in real life, everything comes to an end. One cannot hide all of the bones they collected during their lives in their closet. The close is going to become full and start leaking. There is no way around it and much like in real life BoJack didn’t escape his demise as well. Seasons 3 and 4 becoming darker and darker and him ending up in the mental hospital in season 5. The idea is that even though he got all of his help the last two episodes of season 6 are quite difficult to understand as the fanbase is split.