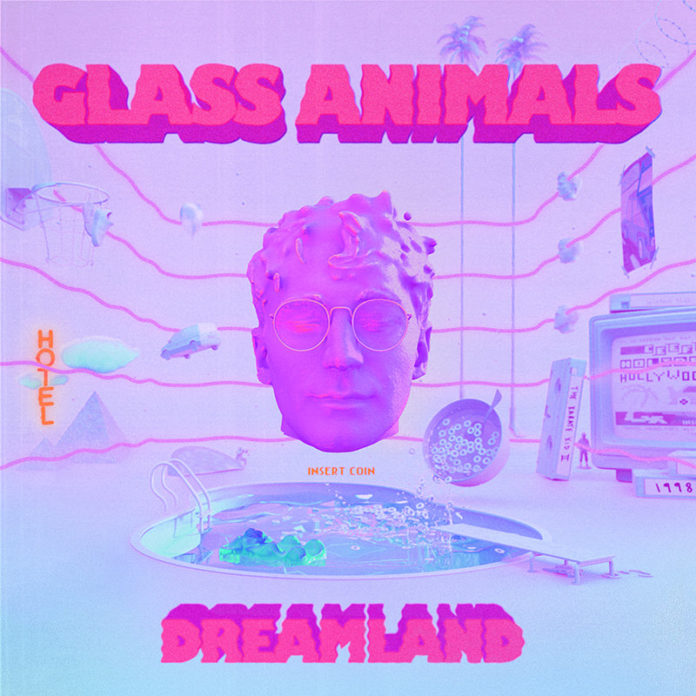 Glass Animals are not a band known for turning inwards. For the most part, the Oxford psych-pop outfit’s success has rested on their smooth yet eclectic brand of indie pop, which saw them carving out their own place in an increasingly saturated genre. They sharpened their songwriting with 2016’s Mercury-nominated and often brilliant How to Be A Human Being, as frontman Dave Bayley’s lyrics provided more depth with their compelling portraits of humanity. An introspective album like Dreamland, then, seems like the natural evolution for the band, leveraging Bayley’s knack for imaginative storytelling for an album that finds them interrogating not so much the world around them as their own selves.

That’s the proposition, at least; listening to Dreamland, one could argue that the personal framing of the record doesn’t really reflect its content as much as perpetuate a certain narrative about the band’s growth. As its cover as well as their Windows 98-style website hints at, the album feels indebted to a kind of vaporwave aesthetic that’s more concerned with self-referentiality than any kind of deeper meaning. It doesn’t help that Bayley’s digitized voice seems precise-engineered to make him sound less human, while the four-syllable lines he spits out for the majority of the record could well have been designed by an AI.

But much of the melancholy here lies in the subtext of the record, which was inspired by a traumatic period for the band after a life-threatening accident involving drummer Joe Seaward that left him with a near-fatal brain injury. Though Dreamland doesn’t offer any direct exploration of the feelings the event incited, it evidently prompted Bayley to shift his lyrical focus – and when that emotional vulnerability comes to the forefront, it opens the door for some of Glass Animals’ most emotionally affecting work to date. Though arriving late into the album, ‘It’s All So Incredibly Loud’ is a pensive highlight where Bayley’s vocals evoke the theatricality of a Matt Bellamy as he cries out: “I’m breakin’ down/ Whispers would deafen me now.” ‘Heat Waves’ is another evocative highlight, this time bolstered by a warm, woozy instrumental and liquid guitar tones that accentuate Baley’s sense of disaffection.

Elsewhere, though, Baley’s greatest strength remains his ability to switch between perspectives. On ‘Domestic Bliss’, he recalls being young and bearing witness to a friend’s mother being in an abusive relationship, and it sounds both moving and profoundly empathetic. It’s when Bayley delves into his own past that he often veers too close to vapid millennial nostalgia, which doesn’t help when the album’s sound is so intentionally synthetic. ‘Space Ghost Coast to Coast’ is the biggest offender here, which, despite its infectious hook, undermines any potential sense of wistfulness about one’s youth by throwing away references to Pókemon and GTA. But I’ll take that track any day over something like ‘Melon and the Coconut’, which is so painfully ridiculous and cringeworthy you wonder why they would even leave it on the record except as a joke.

Even if the playful, sometimes obnoxious lyricism that runs through most of the album was actually constructed by an AI that’s extremely well-versed in contemporary pop culture (and not much else), it still wouldn’t take much away from the appeal of the album. Ultimately, the most engaging aspect of Dreamland by far is its intoxicating atmosphere, which takes their festival-ready brand of psych-pop and infuses it with a healthy dose of hip-hop – not entirely new territory for the band, who’ve collaborated with a number of hip-hop artists in the past. Denzel Curry makes a notable appearance on the dynamic, trap-infused ‘Tokyo Drifting’, while the less memorable ‘Tangerine’ interpolates Drake’s ‘Hotline Bing’ to less exciting effect.

While the album does recycle a lot of the same musical tropes, you have to applaud the band’s attempt at presenting a more coherent sonic vision than they have on previous albums, all while boasting some of their most catchy grooves – take the hypnotic ‘Your Love (Dejá Vu)’, for instance, or the breezy, laid-back ‘Hot Sugar’. There’s something fascinating about the way the band manages to juxtapose the more personal subject matter with dreamy soundscapes that have the inherent quality of tearing away any kind of emotional intimacy. The near-six-minute closer, ‘Helium’, however, proves that the band can easily pair self-reflective lyrics with distant, minimalist electronics without losing their punch. “My mama said they used to be white pyramids/ They float above the sand, they’re slowly sinking in/ Are our foundations destined to keep crumbling/ Just ’cause we started this with zero innocence?” Bayley coos. Wherever Glass Animals decide to take their sound next, one can only hope they keep digging deeper.

Album Review: Glass Animals, 'Dreamland'Glass Animals are not a band known for turning inwards. For the most part, the Oxford psych-pop outfit’s success has rested on their smooth yet eclectic brand of indie pop, which saw them carving out their own place in an increasingly saturated genre. They...