Open Mike Eagle has announced a new album. It’s called Anime, Trauma And Divorce and is set to arrive October 16th via AutoReverse Records. In addition to the previously released ‘The Edge Of New Clothes’ and ‘I’m A JoeStar (Black Power Fantasy)’, the album will also include the newly unveiled single ‘Bucciarati’, which features Kari Faux. Check it out below, and scroll down for the album’s cover artwork and tracklist.

“Before the world went to shit I was already in the middle of a few personal crisis’,” the rapper said in a statement. “Shit had gone haywire personally and professionally and my therapist had to remind me that I have an outlet to process some of my shit in rap music. So I made a bunch of painful rap songs and Jacknife Lee was kind enough to help me make good music out of them. Maybe it can help other people too. It probably won’t but maybe.” 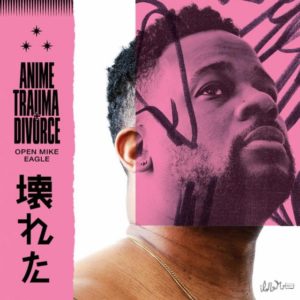