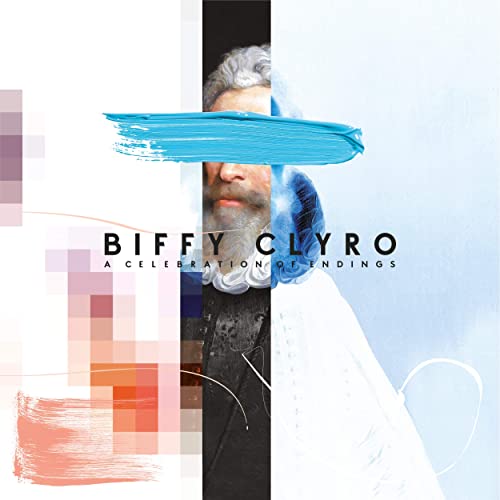 Nine albums into their career, alt-rock titans Biffy Clyro have established themselves as one of those acts constantly straddling the line between the commercial sound that catapulted them to fame and the experimental leanings of their earlier work. It’s a familiar story, but you can probably count the bands that have successfully carried on that balancing act for so long on the fingers of a single hand. Their 2016 LP Ellipsis was a mostly uninspired attempt at honing in their knack for stadium-sized riffs and radio-friendly hooks, so it only makes sense that the Scottish rockers had to bring back their more ambitious tendencies for the genre-bending soundtrack for Balance, Not Symmetry last year.

Though Biffy Clyro have nothing to prove at this point – most fans already know each release will land somewhere on the mainstream-experimental rock continuum, and adjust their expectations accordingly – but their new album, A Celebration of Endings, is one of those out-sized, apocalyptic efforts that has unintentionally taken on new resonance in the wake of, well, everything. An album largely about witnessing the end of the world as we know it, it might not usher in a wave of new fans, but it might spark the curiosity of listeners who can, now more than ever, relate to the creeping feelings of dread that prevade it. “Times are changing/ And everybody knows,” singer Simon Neil declares on ‘Worst Type of Best Possible’, while on ‘Weird Leisure’ he makes a pertinent observation: “We’re fighting an ugly war/ And it’s no good to freak out.”

If we weren’t living in the year 2020, though, the fact that the way the album is framed is really just a way to up the momentum might have come off as a little more obvious. A Celebration of Endings is, for the most part, a record about the dissolution of a relationship that’s been magnified to cataclysmic proportions, and not always a very effective one at that. Neil’s most obnoxious impulses come through on the track ‘End Of’, in which he bafflingly wails: “I’ll tell you right now/ I woulda fucking died for you/ You wouldn’t know how/ To be a friend.” But the lyrics aren’t usually the main reason one listens to a Biffy Clyro song, and what the album lacks in depth, it makes up for with some of the band’s most exhilarating compositions. In fact, few tracks here are as musically riveting as ‘End Of’, with its thunderous riffs, pummelling bass, and all-around great performances.

Also worth highlighting is the rapturous ‘Worst Type of Best Possible’, which opens with a gnarly riff that grows into one of the more surprisingly decent cleaner-sounding songs on the album, while ‘Weird Leisure’ retains its fiery energy throughout. But for almost every impressive feat the band manage to pull off, like the grand theatrics of ‘The Champ’, there’s a disappointingly predictable track that does little more than stick to modern rock’s most tired tropes. ‘Space’ is the biggest offender here, a painfully saccharine ballad with lines like “We tried to conceal the scars we wore/ ‘Cause we couldn’t show what we couldn’t show”; ‘Instant History’ also relies too heavily on melodrama with little to no substance. Still, listening to the gutsy lyrics on the otherwise mundane ‘Opaque’ or the epic prog-rock closer ‘Cop Syrup’, it’s clear that Biffy Clyro are still far from a boilerplate alt-rock act, and those ambitions are mostly put to good use on their latest outing.

Album Review: Biffy Clyro, 'A Celebration of Endings'Nine albums into their career, alt-rock titans Biffy Clyro have established themselves as one of those acts constantly straddling the line between the commercial sound that catapulted them to fame and the experimental leanings of their earlier work. It’s a familiar story, but you...