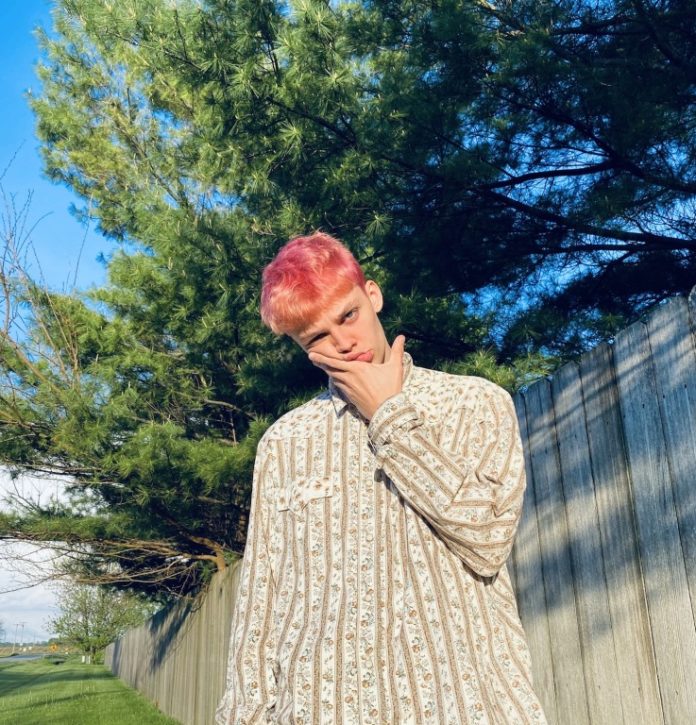 Worry Club is the musical project of Chase Walsh, a 21-year-old singer-songwriter and multi-instrumentalist hailing from Chicago. Having picked up the guitar at the age of five, Walsh soon taught himself how to play drums, piano, bass, and violin and dove headfirst into the world of self-producing. He released his first EP as Worry Club earlier this year, titled Chase’s Hands, a collection of introverted bedroom pop recordings dealing with the artist’s struggles with mental health and the way it’s affected his day-to-day life. He continued dropping singles going into the year as he refined his approach, and his latest couple of songs, ‘Japenese’ and its B-side ‘A Whole Month of You’, are his catchiest yet; the first is a laid-back, breezy indie pop tune with hints of modern hip-hop production (it’s no surprise he lists BROCKHAMPTON as one of his influences) and more than a few memorable lines (“Couldnt’ hang last week, I was learning Japanese”) that even caught the attention of none other than Billie Eilish, while ‘A Whole Month of You’ is driven by a bright, colourful synth line that’s bound to get stuck in your head. With a penchant for tight hooks and self-effacing lyrics, it’ll be interesting to see how Worry Club will expand their sound going into the future.

We caught up with Chase Walsh of Worry Club for this edition of our Artist Spotlight series, where we showcase up-and-coming artists and give them a chance to talk about their music.

You started making music while you were still in high school – what drew you to songwriting?

When I was younger I mainly listened to instrumental/theatrical music like Sigur Rós, Explosions in the Sky, Mogwai, etc. but as I began to find other bands within the pop punk scene in Chicago I was like “oh shit people just like me are writing songs about things that I can relate to”. By no means were my songs GOOD in highschool, but they were a huge catalyst in my music career.

You’ve said that “music is the only way I can get some of the negative thoughts out of my head.” Is that what you hope to achieve for the listener, too?

Yes, 100%. I want the listener to be able to forget about their stress while they’re listening to the song. To be caught up in all that it is. To get in touch with what they’re feeling and forget about all the other bullshit that doesn’t matter. Like how I feel when I’m listening to my favorite songs.

Who are some of your influences, and have they changed over time?

My biggest influences of all time have to be The Maine, Thin Lizzy, Explosions in the sky, Say Anything, Microwave, Lil Peep and Modern Baseball. As of late, I’ve been listening to a lot of Arlo Parks, Brockhampton, Snail Mail. I just recently put a playlist FULL of our influences on our Spotify page if anyone wants to check some of those bands out.

Could you talk about the single ‘Japanese/ A Whole Month of You’? What was the inspiration for each track?

For ‘Japanese’ the general vibe was my tendency to be an introvert. I’m always calling off plans to stay at home and one time my actual excuse was “sorry I couldn’t hang last week, I was learning Japanese.” ‘A Whole Month Of You’ is about staying with someone who you know is bad for you. They’ll “keep your body bruised” – it’s about realizing your own self worth, saying “fuck you” to that person and breaking off to do your own thing.

The recording process was fairly similar to other songs I’ve put out. I’ll usually finish tracking/writing the song in about 2 hours but then I find myself constantly tinkering with the song until I go crazy. Months will go by as I run from my studio to my car listening to it at different volumes just to get that perfect mix.

I really hope to keep this momentum going, I’d love to collaborate with some artists that I love and just keep making the best music that I can. I know that while I grow as a person, I’ll continue to develop a new sound. I also would really love to be on a personal level with all of my fans so I can help them through tough times because I know their support keeps me going every single day.