Hot Chip have announced they will be curating the latest entry in the Late Night Tales compilation series. The 19-track mix comes out October 2nd, and will feature four new songs from the group, as well as mixed tracks by Fever Ray, Nils Frahm, Kaitlyn Aurelia Smith, Suzanne Kraft, and more. The English electronic outfit have also now shared one of their cuts, a cover of the Velvet Underground’s ‘Candy Says’. Listen to it below, and scroll down for the album’s cover artwork, tracklist, and trailer.

“I think we all had slightly different understandings of what a Late Night Tales compilation might consist of; varying interpretations of the brief,” Hot Chip’s Alexis Taylor said in a statement. “For some the mix might be what you’d want to listen to as your late night continues, after a night out. For others maybe it suggested a selection of music for listening to as you drift off to sleep; then again it could just be music evocative of night time, or concerned with its traditionally “darker” moods.”

He continued: “We’ve put together a mix of music which ties all of these ideas together and represents some of our favourite music new and old, some of it directly influential on Hot Chip and some of it music we have discovered and loved, been surprised by and connected to. There are three new songs of ours which we’re really proud of, and which I think connect naturally with the nocturnal world the compilation speaks of, and a cover of “Candy Says” which is one of the first songs the very early version of Hot Chip played when we were still at school.”

Last year, Hot Chip released their seventh studio LP, A Bath Full of Ecstasy. The last instalment of Late Night Tales came out over a year ago, and was curated by Floating Points. 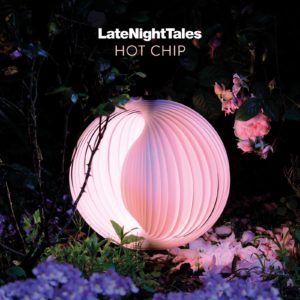