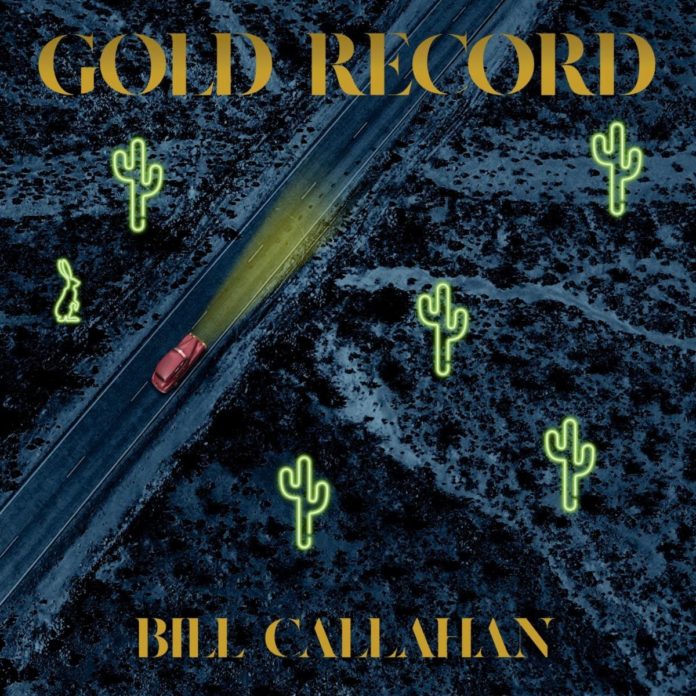 Bill Calllahan’s music has been by turns idiosyncratic, personal, witty, and heartfelt. To quote a song from his new album, Gold Record: “Lonesome in a pleasant way.” But throughout his career, Callahan’s uniquely intimate approach to songwriting – not always in terms of sound, but the way it swaddles you with an overarching sense of solitude – has meant that whatever stylistic turn he makes, it always feels like you’re following the same artist’s personal trajectory. Last year’s unassuming yet emotionally profound Shepherd in a Sheepskin Vest, his first album in six years, saw Callahan warmly describing the simple pleasures of domestic life; getting married and having a child had evidently changed his perspective, but it still felt like we were listening to the same man, just at a different point in his life.

Callahan doesn’t document that personal growth on his new album in the same way, but it still exists as part of the subtext, sometimes rising to the forefront. Perhaps the most obvious instance is when he covers his own 1999 classic ‘Let’s Move to the Country’, recorded under the moniker Smog, but fills in the words that were previously left unuttered: “Let’s start a family/ Let’s have a baby,” he sings. The original was characterized by the uncertainty that overwhelms young people making big decisions; this one exudes a sense of calm self-assurance and an overall spirit of togetherness, even casually hinting at the possibility of having a second child – a decision that carries equal weight but nevertheless comes off more like a pleasant thought than a daunting commitment.

For the most part, however, Gold Record sees Callahan shifting away from the personal framing of Shepherd to tell stories about seemingly ordinary people finding themselves in seemingly ordinary situations, which of course reveal themselves to be anything but. The narrators may or may not have anything to do with Callahan himself; the opening track, ‘Pigeons’, is cheekily bookended by the lines “Hello, it’s Johnny Cash” and “Sincerely, L. Cohen”, a reference to two legendary songwriters whose baritone voice was as low as Callahan’s is on this album. But Callahan doesn’t seem to be comparing himself to their work or legacy as much as he tries to find an endearing way to dissociate the song’s narrator from himself – a line that’s often blurred throughout the album, and which makes for an engrossing, thought-provoking listen.

But the portraits the singer-songwriter paints on the album no doubt have relevance to his own life, because no matter how many layers there are to a song, he often arrives at the sort of conclusions that have deep universal resonance. On ‘Pigeons’, the protagonist finds himself hesitantly giving advice to a couple of newlyweds: “And I said, “When you are dating you only see each other/ And the rest of us can go to hell/ But when you are married, you are married to the whole wide world/ The rich, the poor/ The sick and the well/ The straights and gays/ And the people that say ‘We don’t use those terms these days’.” Gold Record is filled with such quotable lines, further demonstrating Callahan’s knack for insightful commentary that never comes off as lofty or pretentious, but rather generous and caustically self-aware.

There’s a fair bit of self-reflection, too, on tracks like the pensive ‘35’, which opens with the lines: “I can’t see myself in the books I read these days/ Used to be I saw myself on every single page”. And yet, Callahan seems to use the rest of the song’s runtime in an attempt to elicit the opposite response by imbuing his lyrics with both meaning and affect: “The moon can make a false love feel true/ It can make me still wanting you,” he muses. On ‘Another Song’, a philosophical rumination (“I guess the light that’s gone belongs to yesterday/ And the light that’s leaving takes its own sweet time”) turns into a beautifully intimate scene of a couple laying in bed after a day of work, “wanting/ For nothing at all/ Except maybe another song.”

As wonderfully evocative as these moments are, the most compelling tracks on Gold Record are those in which Callahan hones in his skills as a narrative storyteller: ‘The Mackenzies’ is a prime example of that, a highlight on the album that starts off inconspicuously enough but ends with a devastating twist; ‘Breakfast’ is another deceptively amiable cut with unnerving undertones lurking just beneath the surface. It’s no wonder Callahan decided to unveil a song from the record every week prior to its release, as each track here is basically its own self-contained narrative. Where his previous album was an hour-long meditation on the nature of domesticity, his latest finds him broadening his narrative scope while offering something a bit more focused and easygoing musically – clocking in at 40 minutes and containing half the amount of tracks, it’s a lot more digestible, too, but certainly no less rewarding.

Album Review: Bill Callahan, 'Gold Record'Bill Calllahan’s music has been by turns idiosyncratic, personal, witty, and heartfelt. To quote a song from his new album, Gold Record: “Lonesome in a pleasant way.” But throughout his career, Callahan’s uniquely intimate approach to songwriting – not always in terms of sound,...