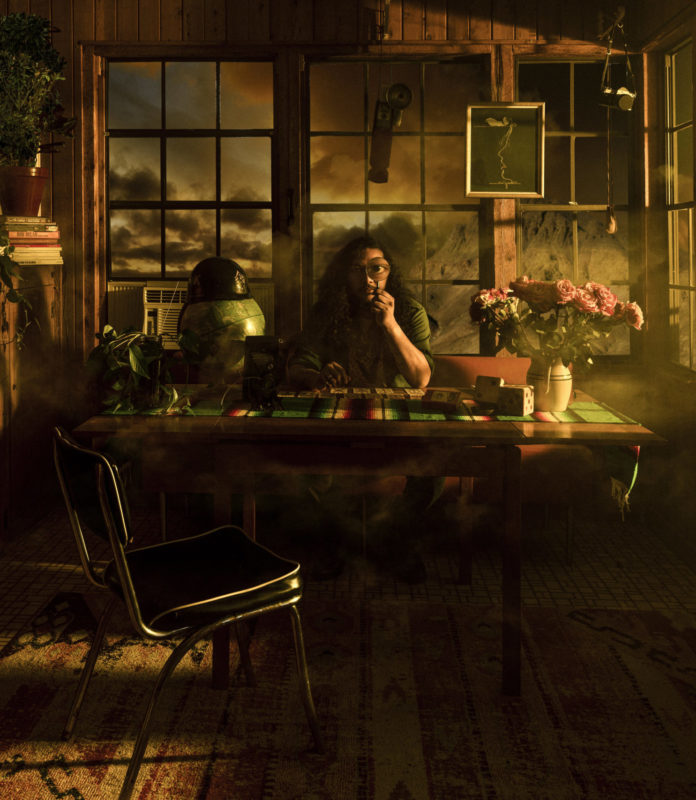 Margaret Chavez is the project of Austin-based singer-songwriter Marcus William Striplin, who fuses elements of space rock, freak folk, and alt-country. Having started out his career in the late 90s as one half of the psychedelic outfit Pleasant Grove, he recently issued his second solo album, Into An Atmosphere – a sprawling, ambitious, and often breathtaking effort co-produced by longtime collaborator Stuart Sikes (Cat Power, Loretta Lynn, The White Stripes) and mastered by Greg Calbi (John Lennon, David Bowie, Bruce Springsteen). Oozing with atmosphere and darkly enveloping arrangements, the album weaves together personal and political narratives, from the sharp, unsparing social commentary of ‘The Croupiers Unite I.C.E’ to the heartbreaking opener ‘Honeysuckles’, in which he assumes the perspective of his mother during her most difficult moments. Elsewhere, he veers towards biting self-reflection: “I built myself a ship inside a bottle / and for ten long years I was Master and Commander,” he laments on the slow-burning, mystical ‘I Virgo’; follow-up ‘H O R A’ is an 8-minute epic that seems intent on stretching out time itself as Stiplin sings “You’ve got time” over and over, culminating in a moment of transcendence that’s as blissful as it is genuinely life-affirming.

We caught up with Marcus William Striplin for this edition of our Artist Spotlight series, where we showcase up-and-coming artists and give them a chance to talk about their music.

That’s a great question. It’s got to be watching my father’s thumbs play out drum patterns on our dining room table. It’s that memory and the memory of hearing and experiencing my first ear worm, which would have been the song ‘I’ll Never Fall in Love Again’ composed by Burt Bacharach w/ lyrics by Hal David. THAT was the first song I can remember humming and singing when I was a very small boy. That said, another fond memory is singing ‘White Christmas’ to my mom anytime I sensed she was down. She smiled every time.

How did you decide to create Margaret Chavez?

Out of tribute and necessity… After my mother, Margaret, passed a few years ago, I decided to keep her spirit glowing and the only way I could imagine pulling it off was naming my solo endeavors after her. To me it’s only fitting that this band, project and therapy that I have made and wade in be reflective of the creative freedom she allowed and encouraged when I was growing up. It’s very nice to see her name around. At the end of the day, my creativity needed more space… A playground, where I can dance like nobody is watching.

What were some of the ideas that went into the making of your latest album, Into an Atmosphere?

From the very start I knew that I had a select group of players that I really wanted on this album… There is a band from Ft. Worth, Tx that deserves to be know by every single human on the dang planet… Stumptone, be thy name!! Chris Plavidal (The Telescopes), Mike Throneberry (Marked Men & Mind Spiders), Frank Cervantez (Sub Oslo & Wire Nest) and Peter Salisbury (The Baptist Generals & Mind Spiders) all combined (like Voltron) make up Stumptone. I’ve been a fan for 15 years and I’ve always wanted to work with Plavidal, he’s got the touch, man. I asked and they agreed to come into the sessions with open minds and hearts. They were the conduit of my musical ideas and I couldn’t be happier with what we accomplished.

With these cuckoo birds affixed to the sessions, I was able to truly relax and let the energy come in and talk to me. I just so happened to write the album on my J-45 and stuck to recording the entire album on it too…

That said, I’m very comfortable with the uncomfortable opening to the album, that first song is the tugboat to the rest of them, graphic and true. It’s most certainly a politically driven album here and there too, a very conscious decision that started with my debut MC album.

How did you feel about putting it out into the world in the current political climate?

GREAT. I’ve mentioned this before and I’ll say it again, I hope that this album resonates with someone out there that is in need of a nudge out the door on election day, or someone that’s in need of guidance in the voting booth. I recall the weeks after 911, and how I was so angry at Osama… I was taking in and taking on opinions of others and wearing them as my own – I was blind. It took a very dear friend of mine to pull me out of it and settle me down in a clearing. I’ll never forget it, it was like being deprogrammed.

What was it like working with Stuart Sikes and Greg Calbi in the studio?

I’ve sat behind Stuart for the past 16+ years, on and off on all sorts of projects. I literally know the back of his head like the back of my hand. He is one of the kindest and smartest humans I’ve ever had the pleasure to spend time with. His methodology is a deep ocean of sonic wonderment. No joke – he’s a wizard. In all seriousness, I appreciate his work ethic, it’s very similar to mine. We see eye to eye on trying to get the right take on a track, even if that requires 10 takes. He’s a wizard.

I chose not to sit in with Greg when he mastered the album; when you’ve done the scope of work that he’s done, the last thing you need is me in the room. There were no notes required when I heard the masters come back. He, too, is a wizard. I’m amazed at people and animals that are able to see or hear things that other creatures cannot.

Could you talk about the inspiration for the music video for ‘HORA’?

I combed through archive.org for about 3 weeks and compiled footage that I feel conveys the spirit of the times. There’s a lot of white men directing others on what to do, and a FEW women smiling and keeping in line. It’s a streamlined dystopian future/past portal of sorts. Aesthetically speaking, it’s like Omni magazine came to life. Quarantine has forced me to get to know video editing better; it’s a medium I’ve always said I’d get around to, and all it took was a global pandemic.

What’s next for you?

For the past two months I’ve been “punching in” everyday, 6 hours a day – I sit with my guitars and just play. I bought myself a big dry-erase board and set a goal to complete 10-15 songs by September 28th… I’m at 7 as we speak… I’m writing songs for the next MC album and for Pleasant Grove. PG is re-releasing an album we cut back in 2002, Auscultation of the Heart (we totally ripped off the title and cover of a medical record), which was released in the E.U. on the Glitterhouse record label out of Germany but never had a proper US release. So, it’s getting re-mixed and re-mastered by Matt Pence later this year for a release on We Know Better Records in 2021. That said, we plan to release an EP of new material from PG along with the re-release.

I’m excited about where the ship is sailing – what’s cool about MC is that I can do anything I want and I will… There’s an electronic album in me, and a doom one, too. So, I wait… I should be on the road right now and I’m not. That’s just the way it is for now. Everyday I remind myself that I’m very fortunate and shouldn’t complain about anything – there’s a man that was just cut down for nothing… again.