Aesop Rock has announced his first solo album in over four years. It’s called Spirit World Field Guide and it arrives November 13 via Rhymesayers Entertainment. Aes has also shared a new song titled ‘The Gates’ alongside an accompanying music video directed by Rob Shaw and featuring illustrations by Justin “Coro” Kaufman. Check it out below, and scroll down for the 21-track LP’s cover artwork and tracklist.

“If you are among the countless individuals who find themselves feeling both dead and alive at the same time, the information contained within may serve as an invaluable asset to your journey,” Aesop Rock said in a statement. “Godspeed and good luck.”

According to a press release, Spirit World Field Guide is a concept album that follows Aesop through a parallel universe “rife with hallucinatory images of killer eels, magic spells, and people on the run, peppered among anecdotes, recipes, survival tips, warnings, maps, drawings, and more.”

Aesop Rock’s most recent solo album, The Impossible Kid, came out in 2016. The following year, he composed the score for the movie Bushwick. Last year, he joined forces with Black Moth Super Rainbow’s Tobacco for the collaborative LP Malibu Ken. 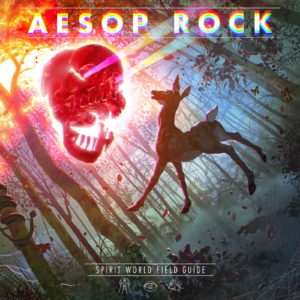