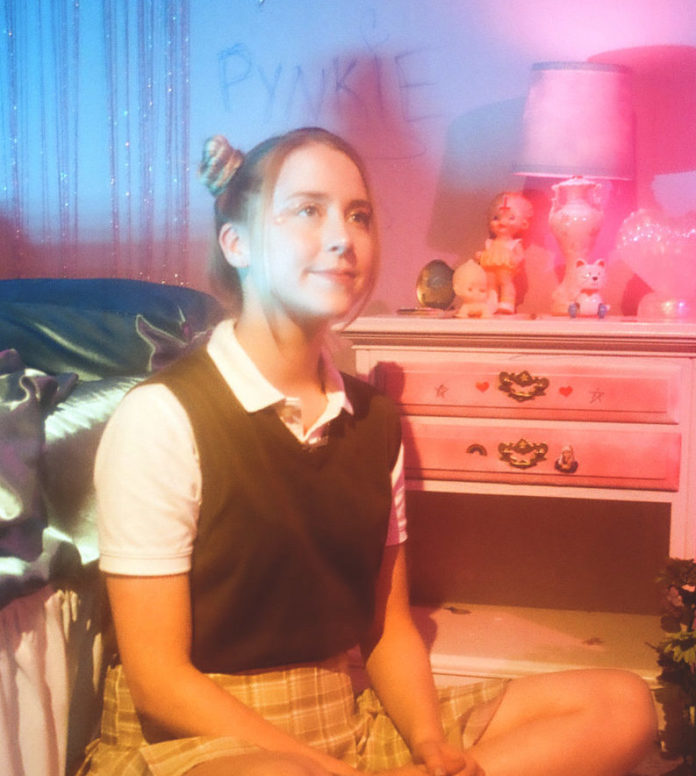 Nurse by day and music maker by night, New Jersey based Lindsey Radice aka PYNKIE has had a more bizarre album making experience than most. Trying to put the finishing touches on her sophomore album #37 wasn’t quite the way she envisioned it, having had to focus on being a front line worker throughout the pandemic. #37 follows her 2018 debut album neoteny, which introduced listeners to the whimsical, nostalgic and razor sharp world of PYNKIE. Playing like a 90’s infused, delightfully off kilter indie pop gem, PYNKIE’s music possesses a warmth stemming from the sunny, warped guitars: on tracks like ‘Shrinking Violet’, we see these guitars at the forefront with simple riffs laid over one another in a way that’s innately soothing, while on crowd favourite ‘Dew ♥️’ we hear the track flex itself outwards, spreading its slacker goodness in a way that has Mac Demarco quaking. Her 2019 single ‘Funny Boy’ showcased PYNKIE’s penchant for inflecting her music with personal touches, using clips from South Park and Rocko’s Modern Life to accentuate the track. PYNKIE plays jingly guitar music that’s wonderfully orchestrated by Radice’s voice, which is beautifully dreamy, husky in places with the occasional do wop edge, rendering her sound wistful and sepia-toned. It evokes a feeling, more than anything, one of frivolity and snark, like a chewy sweet with a tangy centre; PYNKIE’s world is one of insatiable charm and infectious fun.

We caught up with PYNKIE for this edition of our Artist Spotlight series, where we showcase up-and-coming artists and give them a chance to talk about their music.

The inescapable question; how has lockdown treated you? Being a nurse it must be pretty intense, how did you balance that with music making, finishing the album and generally keeping your head up?

Lockdown wasn’t the worst thing in the world for me because THANKFULLY I started being with my bf/bff (John) shortly beforehand and was able to quarantine with him 🙂 He’s also the keyboard/synth player in my band & on the #37 tracks! We make music together separate from my stuff too ❤️

Being a nurse WAS crazy for a lil bit there… Normally I work on an “ortho/neuro” floor which (mostly) deals with people who just had any kind of bone or nervous system surgery (like knee, hip, shoulder, spine, brain, etc). But when Covid happened, we had to convert my floor into an extension of the ICU and I had to float to different floors dealing solely with Covid patients 👀  That was craziness… but thankfully only lasted maybe a lil over 2 months! Things in my hospital have been back to “normal” since mid-June-ish.

If you were to try and summarise your sound into a few sentences, what would those sentences be?

Hmmm 🧐  That’s a toughy… maybe: Music to listen to while walking around a cemetery on a sunny day; sounds for daydreaming about that cutie; feel-good songs that often contain contrastingly sad lyrics lol

What’s the main drive for you to create music, is it something that you’ve always been immersed in since a child or have you discovered it as an outlet as you’ve grown?

I’ve only been writing my own music since like 18 years old, when I was a freshman in college and my friend in my dorm (Aaron) showed me how to use this free recording software (Audacity) & let me use his Blue Snowball USB mic.

But I did always love music! Luckily both of my parents had good taste, so I was exposed to lots of cool stuff from a young age. I remember always falling into deep daydreams and becoming totally immersed in songs (especially while looking out the window during car rides)!

This is your second album, were there any differences you noticed between your approach to making #37 compared to neoteny?

Yes! They’re both all over the place with each song recorded differently Haha… but #37 was actually mixed & mastered by pros, which I’ve never had done before!

What would you say were your major influences both musical and otherwise? Your entire vibe is sort of sardonic yet frivolous; it’s pure fun and self assurance without coming across as mocking or nihilistic. Do you think that comes from the culmination of these influences or is that a reflection of how you navigate the world?

Wow! Had to look up what sardonic meant haha but love that description 👀 & I wouldn’t say I have any direct/intentional influences for any of it 🤔  but the different vibes throughout the album are probably a product of me always listening to my “saved” Spotify songs on shuffle. These all consist of like 90s alternative, ambient, pop, classical, bossanova, hiphop beats, jazz, indie, old country/bluesy stuff, dreamy, electronic, emo-ish, idk what! So what I make is prob a weird combination of whatever elements I subconsciously take from all of that 🤔  Don’t get me wrong, I also love listening to albums in full! My fav is Copacetic by Velocity Girl 🙂

I also do have a generally positive outlook on life, even though lots of shitty shit happens in the world all the time. I still find life to be like a crazy sci-fi movie with endless possibilities (especially since I’ve been haunted by ghosts and/or demons in the past 👀 but that’s a story for another time…)

When you set out to make #37, did you have a specific vision or sound in mind? Was there a kind of narrative that you built the album around or did it come to fruition more sporadically and organically?

I’ve yet to make an album with a specific vision/sound in mind ahead of time (although that is a goal of mine). They’ve both just been compilations of songs made over long periods of time that somehow go together (kinda)!

However, the number 37 was evvverywhere during the making of the album! So that was one constant… For instance, it would coincidentally be the volume level of something or the number on random faders like right/left, wet/dry, etc… and it was on seemingly every license plate on my way to and from the studio and some random sheet music book in the studio was (not purposely) opened to page 37 for the longest time + so many more examples! But I’ll stop ranting now haha.

Are there one or two tracks on the album that are personal favourites? I know it’s probably like asking what your favourite child or plant baby is, but still, is there a specific track that has a really special place in your heart for whatever reason?

Yes! My personal favvv on the album is ‘Sunday Drivin’ ❤️ I just love the way it was recorded and feel like it’s most pleasing to the ears ~ It’s full of cool synth sounds/samples/hidden noises like church bells & sirens (aka stuff you might vaguely hear through your loud music while driving around aimlessly, which is one of my fav things to do!)

Are there any more collaborations in the pipeline following your feature on Social Media’s track ‘unbelievable’? Anyone you’d love to collaborate with?

That’s actually my bf (John) who I mentioned in the answer to the first question! He makes suuuch cool stuff even though he’s barely ever put anything out.. But we started cookin’ up songs like ‘unbelievable’ during quarantine and will eventually put out an EP called Pensacola 🙂

That one actually will be a concept album, which I mentioned earlier I’ve never really done before 👀 ~ All the songs are supposed to make you feel like you’re on that other-worldly island Jodie Foster travels to through a wormhole in the movie “Contact” ! The island is actually a simulation of Pensacola, FL generated from her memories 👀 You should def watch it!

PYNKIE’s latest single ‘Love Theme’ from her sophomore album #37 will be released on September 15th. The full album is due out October 16th and is available to preorder here.