Travis Scott has shared a new song featuring Young Thug and M.I.A. called ‘Franchise’, out now via Cactus Jack/Epic. Produced by Chase B, the track arrives with an accompanying music video directed by Scott and White Trash Tyler and filmed on location at Michael Jordan’s Chicago area mansion. Check it out below.

Speaking about linking up with M.I.A. for the song, Scott said in an interview with Zane Zowe: “She reached out to me for something for her album and we tracked it in London. She’s just one of my favorite artists as humans.”

He added: “When I finished the song, I couldn’t think of nobody else that I could probably just maybe like, body this shit. You know what I’m saying? Body this shit like as hard as like anyone else, any other rapper, any other artists. And just that presence, man. We ain’t felt this presence in a long time. I’m just trying to get this gig shit like right man. We got to get better, right? You know what I’m saying? Like all of this, the energy man, music, beats, raps, God! Everything, she’s the illest of all time.”

The cover artwork for ‘Franchise’, which you can check out below, was designed by George Condo, who created a series of paintings for Kanye West’s My Beautiful Dark Twisted Fantasy.

Earlier this year, Travis Scott teamed up with Kanye West (‘Wash Us in the Blood’), Rosalía (‘TKN’), and Big Sean (‘Lithuania’). He recently contributed a song to the soundtrack for Christopher Nolan’s latest film, Tenet. 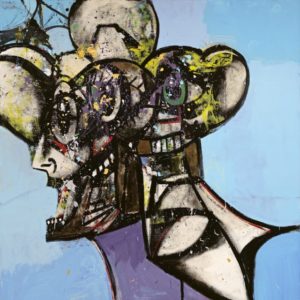