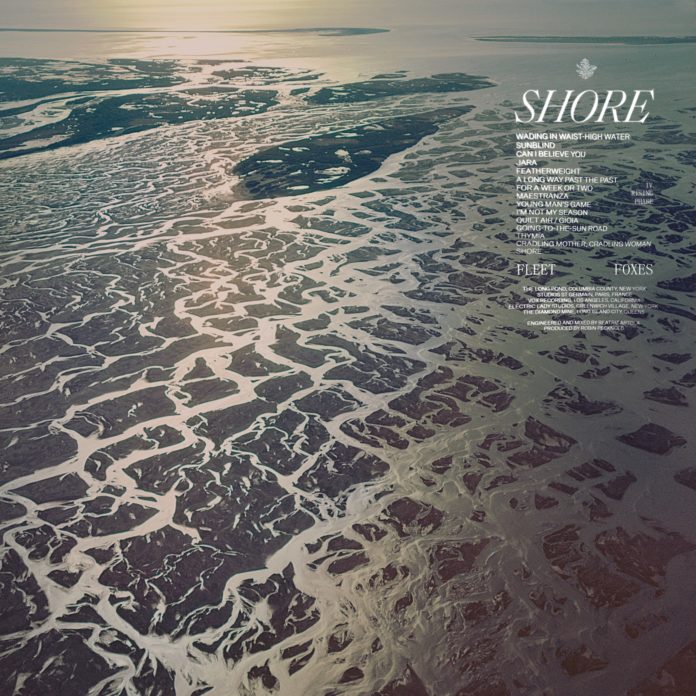 For an album composed and performed almost entirely by Robin Pecknold, Shore might be Fleet Foxes’ most extroverted release to date. The singer-songwriter’s voice doesn’t even feature on the opening track of the record, ‘Wading in Waist-High Water’, where he calls on a relatively unknown singer, the Oxford student Uwade Akhere, to take on vocal duties. When it does emerge on the follow-up, ‘Sunblind’, he uses it to pay tribute to a number of artists who have passed away, from Richard Swift to Judee Sill and Elliott Smith. His lyricism might appear to be a result of deep introspection – such indie folk records are always assumed to be – but this time, it involved making “playlists of hundreds of warm songs to immerse myself in,” as he explained in a lengthy statement, the same one where he uses the phrase “thank you” more than I think anyone ever has in a press release.

It comes as no surprise, then, that Shore is an album whose heart teems with warmth and gratitude. Even as it moves towards a more self-reflective mode, it loses none of its graceful spirit: Pecknold seems intent on absorbing all the beauty of the world around him and using that energy to craft richly textured, gloriously beautiful folk music that’s as personal as it is universal. If the lush walls of sound and ear-pleasing melodies in early Fleet Foxes records were a means of masking the post-adolescent fears and anxieties that lurked underneath, here they serve as a genuine expression of newfound joy and hope in the face of the same kind of existential dread. On the exuberant ‘Young Man’s Game’, he professes to having moved on from the songwriting approach that helped him and his collaborators appear far more mature than their age: “I could worry through each night/ Find something unique to say/ I could pass as erudite/ But it’s a young man’s game,” he sings.

Fleet Foxes’ last album, 2017’s long-awaited Crack-Up, was a knotty, often inscrutable project that seemed to collapse in on itself, leaving you wandering just as it gave you something to hold on to. As compelling as it was overwhelming, the record was steeped in conflict, searching for resolution amidst all the uncertainty and ultimately resting on “I can’t go on, I must go on” as its mission statement. By contrast, Shore is just as complex but much less fragmented: rather being torn between different notions, it oscillates between them, finding comfort in a sense of equilibrium. This explicitly metamodern approach is best epitomised on what is perhaps the most essential song on the album, the light yet life-affirming ‘Featherweight’, where he admits to “staging life as a battleground” in the past, but now holds “love and hate in the balance” and relishes in such simple pleasures as witnessing another warm day.

It’s not that the album resorts to the kind of naivety that would make finding solace seem as easy as adding a letter after the word “war”, and neither does it abscond the musical adventurousness or hefty subject matter of Crack-Up. While both albums are forces of nature drawing on similar elements, one good look at their respective covers makes the differences between them crystal clear: if Crack-Up felt like riding along a wild and unpredictable wave, Shore flows peacefully from one song to the next, leading quietly into its natural point of conclusion. It might not be as experimental or dense as its predecessor, but it is still far-reaching and thoughtful in its composition, from the sweeping orchestral arrangements on the reinvigorating ‘Cradling Mother, Cradling Woman’ to the captivating vocal harmonies that colour ‘Jara’.

On the whole, Shore is as delightfully rich and refined as you would expect a Fleet Foxes record to be – so much so that its 15 tracks are almost too much to take in – but it is also direct and open-hearted in ways that are new and exciting. While Crack-Up felt like it could be a bittersweet but fitting ending to the Fleet Foxes canon, Shore feels like the kind of conclusion that comes with the promise of new beginnings, as if Pecknold could just keep building atop what he has made as he watches the seasons change and continues to hone his craft,

Ever since its inception, Fleet Foxes has been a project defined by its dual nature: more of a solo endeavour during the songwriting phase, but a collaborative process when it came to touring. But as the band will be unable to tour in support of Shore, Pecknold is already planning to release nine new songs come 2021, though this time co-written with the rest of the group, as a means of making up for that loss. This might have come as a bit of surprise a month ago – say, when Pecknold first  debuted ‘Featherweight’ – but listening to the track in the context of this deeply empathetic record, bringing others into his creative process seems like the only possible path forward. As he sings on the chorus, “We’ve only made it together/ Feel some change in the weather/ I couldn’t, though I’m beginning to.”

Album Review: Fleet Foxes, 'Shore'For an album composed and performed almost entirely by Robin Pecknold, Shore might be Fleet Foxes' most extroverted release to date. The singer-songwriter's voice doesn’t even feature on the opening track of the record, ‘Wading in Waist-High Water’, where he calls on a relatively...