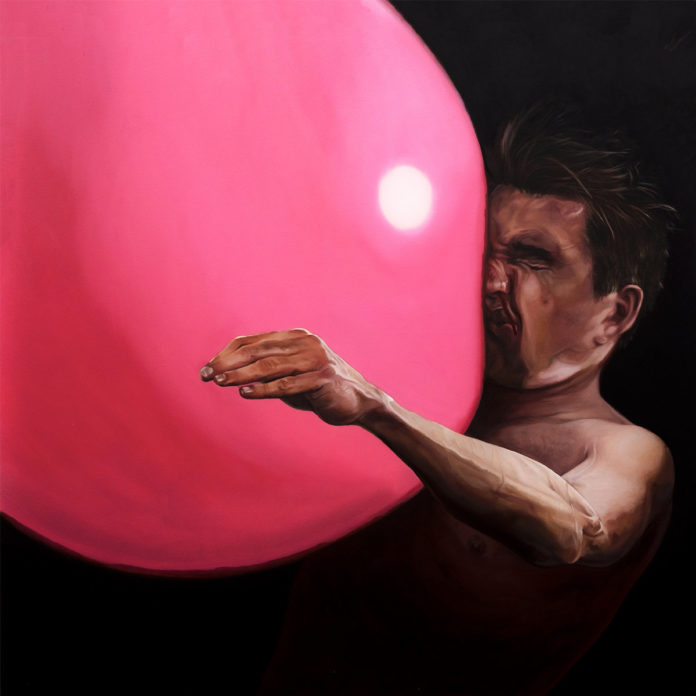 On the opening track of IDLES’ Ultra Mono, frontman Joe Talbot introduces the central conflict that runs throughout the Bristol punks’ already-divisive third studio album. “You’re unthinking, letting yourself go, it might sound silly and non-sensical, but it has the most purpose to me,” Talbot explained in an interview with Clash, referring to such lyrics as “Clack-clack, clack-a-clang clang!” and “Tukka-tuk, tuk, tuk, tuk-tukka.” There’s a deliberate frivolousness to Talbott’s delivery as he emulates what he claims to be “the sound of the gun going bang-bang” and “the sound of the drone button pusher”, which is undercut by the dark irony of the next couplet: “Shh, shhh, shhh!/ That’s the sound of the children tooker.” It leaves the impression of a performer who’s unsure where to position himself; whether to embrace the absurdity in all the chaos or expose it through meaningful satire.

What follows is an avalanche of noise: an attempt to drown it all out, or, in Talbot’s own words, an “explosion of not overthinking anything”. But the pummelling drums and roaring guitars, stripped of the complications of performance, also serve as an evocation of pure horror, the kind that the lyrics simultaneously seem to hint at and scour away from. There’s a darkness there that feels both real and inescapable, approaching an almost Swans-esque level of dread. Which is why the following call to arms – “This means war/ Anti-war!” – feels pointed rather than painfully on the nose, a moment of genuine defiance. IDLES may have found themselves at a crossroads, but their righteous anger hasn’t gone anywhere.

Still, Ultra Mono feels consistently torn between the band’s satirical, nihilist edge and the earnest positivity that has earned them such a devoted fanbase. But it never fully explores that conflict, and neither does it go to any great lengths to unpack some of the ideological uncertainty that’s bubbling under the surface. Instead, the album favours a more direct, in-your-face presentation, and while the results are often mixed, the energy remains exhilarating. Following in the footsteps of 2018’s Joy as an Act of Resistance, the themes of self-love could have had a greater impact had they been paired with more overt expressions of vulnerability – the utterly inane ‘Anxiety’ is the biggest offender in this respect – but the self-awareness showcased throughout mostly makes up for it. “How’d you like them clichés?” Talbot deadpans on ‘Mr. Motivator’, then proceeds to throw out a few: “Let’s seize the day/ All hold hands, chase the pricks away.”

He means every word he shouts. To be clear, IDLES don’t have to choose between humour and sincerity; they’ve proved they can be just as good at both. Their open-hearted embrace of love and kindness as the ultimate ideals is exactly what’s made them such a breath of fresh air in the scene; there’s something riotously fun about the gut-punch positivity of tracks like ‘Kill Them with Kindness’ and ‘The Lover’. But in the context of the record as a whole, they also have the tendency to undermine some of the album’s socio-political commentary by seemingly affording the issue of dealing with their own haters the same weight as the fight against systemic injustice. Because while the overall message of unity is effective across the board, the approach can sometimes lack nuance, particularly on ‘Carcinogenic’ and ‘Na Touche Pas Moi’, both of which feel redundant if not outright shallow.

But not all of Ultra Mono’s polemical moments fall flat. ‘Model Village’, a raucous attack on neo-fascism and reactionary politics, stands out as one of the more pertinent and cleverly written songs on the album, while ‘Reigns’ rails against the ruling class by posing a single yet powerful question: “How does it feel to have blue blood coursing through your veins?” Accompanied by an unsettling industrial instrumental, the line is suggestive enough on its own, to the point that it renders the ones that follow (“How does it feel to have shanked the working classes into dust?”) kind of unnecessary. Directness may be IDLES’ greatest weapon, but they can work around subtext just as well.

It helps that Ultra Mono finds the band once again revitalizing their sound. While noteworthy contributions from The Jesus Lizard’s David Yow, Warren Ellis, and Kenny Beats might easily go unnoticed, the album is peppered with inventive flourishes that prevent it from feeling stale and completely one-note. But it’s the song that finds IDLES most explicitly deviating from their signature formula that’s the biggest highlight on the album: downcast, fragile, and borderline existential, ‘A Hymn’ offers a glimpse into what the band could achieve if they allowed themselves to fully examine some of the darker implications of fame and mindless positivity. For now, Ultra Mono mostly works, if only as a joyous celebration of togetherness. But it’s safe to say it’s probably not gonna work a second time. Thankfully, this album offers enough proof that they’re capable of digging deeper and acknowledging their own contradictions.

Album Review: IDLES, 'Ultra Mono'On the opening track of IDLES' Ultra Mono, frontman Joe Talbot introduces the central conflict that runs throughout the Bristol punks’ already-divisive third studio album. “You’re unthinking, letting yourself go, it might sound silly and non-sensical, but it has the most purpose to me,” Talbot...