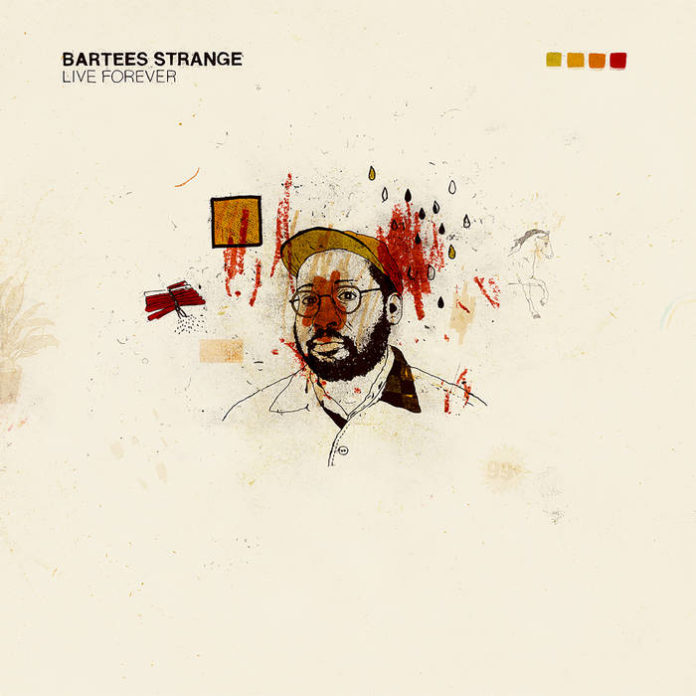 “Genres keep us in our boxes,” Bartees Strange declares on ‘Mossblerd’, the eighth track on his 11-song debut album, Live Forever. By the time we reach that point on the record, though, it’s already kind of an obvious statement – the D.C.-based songwriter and producer does more in the span of half an hour to showcase his eclectic, genre-blending approach than most artists do across their entire discography. Bringing together elements of rock, rap, and electronic music in a way that feels both effortless and refreshing, Strange carves out a space where he can be truly himself. The result is quite simply one of the most versatile and compelling debuts in recent memory, and one that – as its title aptly suggests – is bound to leave a lasting impact well into the future.

It’s hard to overstate just how much variety there is on this album, and how skilfully Strange manages to pull it all off. ‘Jealousy’ is a spacey, meditative opener in which Strange’s performance atop the cathartic “Cut out my anger” mantra recalls the vocal dexterity of Moses Sumney before bursting right into the driving alt-rock of the lead single, ‘Mustang’. That track packs the same dizzying energy as its follow-up, ‘Boomer’, a startling bricolage of sounds that’s once again anchored by Strange’s dynamic vocal presence – he sounds just as comfortable rapping as he does screaming his heart out. “Sometimes, it’s hard to tell exactly where I wanna go/ I know it don’t show,” he sings on the pre-chorus, and he’s right – it doesn’t.

And yet, as confident as Live Forever sounds, what renders it so emotionally potent is the fact that Strange allows himself to be vulnerable. So many “genre-defying” records fail to augment their own inventiveness with any substance or heart, but the writing on this album is deeply rooted in Strange’s personal upbringing and the insecurities that haunt him to this day. ‘Mustang’ reflects on his experiences growing up in a rural, mostly white town in Oklahoma and the ways it made him feel unseen and unworthy; ‘Mossblerd’, which he says is a combination of “Mossberg (shotgun) and black nerd (blerd)”, highlights how the limitations of genre are tied to systemic racism. The whole album is peppered with references to feeling like a ghost and wanting (not) to be seen, a thematic through line that makes this shapeshifting LP feel like more of a holistic experience.

It also helps that the album is both ingeniously sequenced and tastefully produced from front to back. Remarkably, not a single track here sticks out like a sore thumb – clocking in at just 35 minutes, Live Forever achieves the rare feat of being ambitious without feeling bloated or painfully self-indulgent. In fact, if there’s one flaw to the album, it’s that it leaves you wanting more – a couple more tracks wouldn’t hurt, at least. But just when you think the album must be drying up of ideas, Strange keeps coming up with more: ‘Kelly Rowland’ slides into a hazy, intoxicating hip-hop rhythm, while the horns on the cinematic ‘In a Cab’ are reminiscent of Radiohead’s Kid A and ‘Flagey God’ traverses the same nocturnal electronic spaces of Burial’s Untrue. So when Strange delivers that “genres keep us in our boxes” line – against an industrial hip-hop backdrop, no less – he’s surely proved his point.

And yet! Turns out Bartees Strange has a few more tricks up his sleeve – ‘Far’ starts out as a spare acoustic ballad before erupting into a climactic whirlwind of electric guitars, while ‘Fallen for You’ remains an intimate, heartrending singer-songwriter affair throughout its runtime. The record ends with ‘Ghostly’, a song that swaddles you in its dreamy, Blonde-esque textures before Strange picks things up in the second part in an attempt to rise above that foggy mindscape. “But each morning morning I don’t feel worth it/ Pull up to my job almost on time/ Wish I could disappear more often/ Just run home and hide,” he sings. It’s a bleak sentiment, but the music implies the opposite of what’s being said: Bartees Strange has found his voice, and he’s not afraid to use it whichever way he wants. Ultimately, he rests on showing us there’s strength in vulnerability; a cliché, for sure, but just like genre, Strange deploys it in a way that’s genuinely exciting and almost unrecognizable.

Album Review: Bartees Strange, 'Live Forever'“Genres keep us in our boxes,” Bartees Strange declares on ‘Mossblerd’, the eighth track on his 11-song debut album, Live Forever. By the time we reach that point on the record, though, it’s already kind of an obvious statement – the D.C.-based songwriter and...