The White Stripes have announced their first official Greatest Hits album. The collection arrives December 4 via Third Man/Columbia and contains 26 of the Detroit duo’s most iconic songs spanning their discography. So far, only one song – ‘Ball and Biscuit’ – has been confirmed for the tracklist. Accompanying the announcement, The White Stripes have also unveiled a previously unreleased video of the band performing the track live in Tokyo, Japan on October 22nd, 2003. Check it out below, along with the album’s cover artwork.

The album is available for preorder in multiple formats, including CD, 2xLP 150-gram black vinyl, as well as digitally. A deluxe limited edition coloured vinyl variant of The White Stripes Greatest Hits is also available as part of Third Man Records’ Vault Package subscription, featuring new art from collaborator Rob Jones, silk-screen prints, and White Stripes-themed magnetic poetry. In addition to the new compilation, the band will also upgrade all their music videos to high definition and released on the White Stripes YouTube channel in December.

The announcement arrives with news that Jack White and his label have signed a new agreement with Sony Music Entertainment covering distribution of most of his recordings. 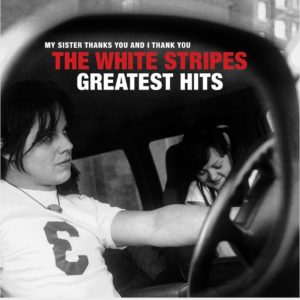