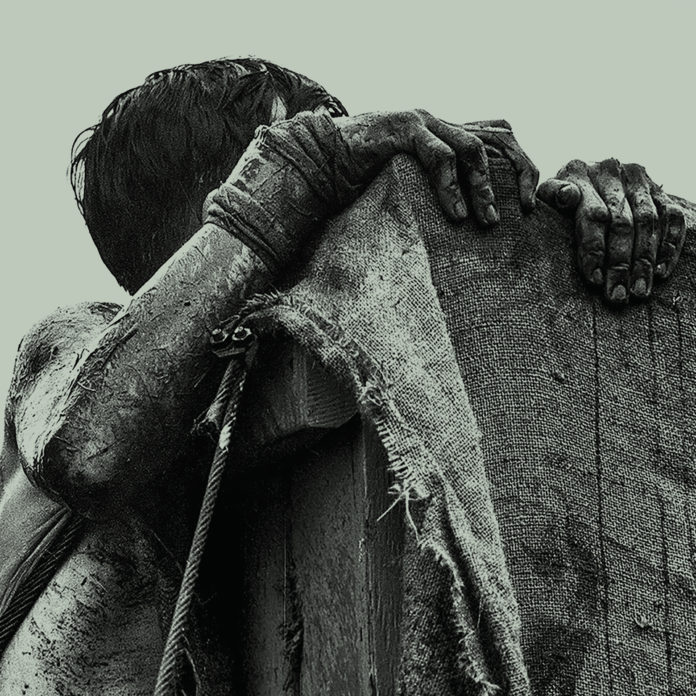 Metz have a long tradition of ending their albums with a manic release of white-knuckled energy. Both ‘Negative Space’ from their self-titled debut and ‘Raw Materials’ from 2017’s Strange Peace serve as their respective records’ longest tracks, but neither compares to the closing track of the Toronto-based noise-rock trio’s pummelling new LP, Atlas Vending. ‘A Boat to Drown In’ stretches out the band’s reliably visceral approach to its outermost limits; at 7:37, “the longest Metz track” may not sound like an impressive feat for a band whose songs often barely pass the 3-minute mark, but “most menacing” certainly does. If the dark undercurrent normally running through the band’s music makes it sound like an ominous forecast, a sign of the storm to come, ‘A Boat to Drown In’ signals the point where Metz finally evoke the full intensity of that storm.

‘A Boat to Drown In’ also served as the album’s lead single, less indicative of a stylistic pivot than a willingness to inject even more dramatic heft into the band’s heavy industrial sound. Atlas Vending marks Metz’s most ambitious and cinematic record to date, thanks in part to Seth Manchester’s mixing, which inevitably calls to mind the producer’s work on Daughters’ crushing 2018 comeback album You Won’t Get What You Want – a dynamic mix of maxed-out abrasion and hypnotic precision. ‘Pulse’ opens the album with a nightmare-inducing snare drum that seems to exist for the sole purpose of making your innermost demons materialize out of thin air, Alex Edkins’ voice sounding like a zombie that’s just risen from the dead.

Despite being recorded with Steve Albini, whose work with acts like the Jesus Lizard and Nirvana has always been a major influence for Metz, the band’s previous studio album, 2017’s Strange Peace, was less forceful and much rawer in its production compared to Atlas Vending. The songs here anchor in the same formula that longtime fans will be familiar with, but they achieve a new kind of amplitude that proves the band is only interested in refining and pushing their sound forward. “Propulsive” is the only fitting description for the majority of the tracks on the album, but each one has a slightly different texture than the other. Ghostly backing vocals complement Edkins’ Cobain-like wails on the chorus of ‘Blind Industrial Park’, while the straightforward, almost cheerful punk of ‘No Ceiling’ is sandwiched by the relentless 5-minute stomp of ‘The Mirror’ and the equally ferocious ‘Hail Taxi’.

“I turn it off, I drown it out, it’s never ending/ The tension in the air hits every day,” Edkins sings on ‘Sugar Pill’, a track he says is about “social media and how it is completely addictive and I don’t think offering anything of value to anyone,” but that works just as well in relation to anything else that’s corrosive enough to cause mass hysteria. As far as tension goes, there’s barely any turning it off on Atlas Vending, but the band knows exactly when to dial it back; it’s through that constant push-and-pull that the songs retain their chaotic vitality. The cloud never fully subsides – the fact that the album is a grim listen will surprise no one, but it also lacks the colour of some of the band’s past work, as if going in the opposite direction that Strange Peace hinted at. And yet, it doesn’t leave you feeling empty. If Atlas Vending frames life as an inescapable hellscape, ‘A Boat to Drown In’ is the narrative conclusion that sees a chance for escape. “If we don’t leave now,” the narrator realizes, “we’re not getting out alive.” It’s not clear where he was or where he’s going, but one thing’s certain: like Metz, there’s no way he’s staying in one place for too long.

Album Review: Metz, 'Atlas Vending'Metz have a long tradition of ending their albums with a manic release of white-knuckled energy. Both ‘Negative Space’ from their self-titled debut and ‘Raw Materials’ from 2017’s Strange Peace serve as their respective records’ longest tracks, but neither compares to the closing track...