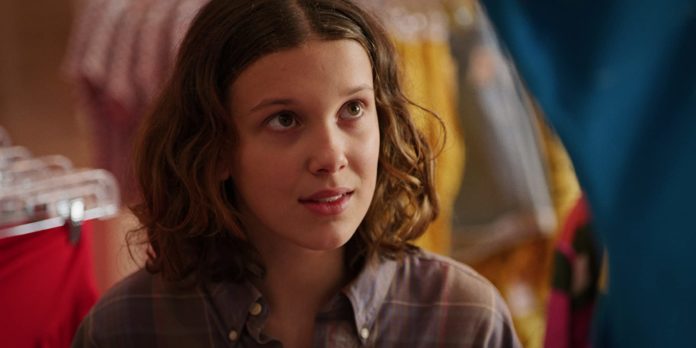 After three seasons, Stranger Things has firmly cemented its place in the ’80s-inspired sci-fi zeitgeist. The show’s first season thrust its stars to instant fame and rocketed up Netflix’s rankings to claim the top spot.

Set in a small town called Hawkins in Indiana, the story begins with the abduction of Will Byers. His friends Mike, Lucas, and Dustin embark on a search while local authorities are convinced he’s dead. At the same time, a young girl escapes from the Hawkins National Laboratory with nothing but the gown she wears. She hardly ever speaks and is intent on running away.

Other residents start disappearing and it soon becomes clear that something supernatural is going on. Eleven, the escapee, has accidentally opened the Gate to the Upside-Down, an alternate dimension where creatures lurk and suck the life out of everything – and everyone. Eleven herself possesses supernatural abilities such as telekinesis.

When we first meet Eleven, she’s a shy, flighty thing who can barely utter a word. This is largely a result of the trauma and abuse she’s suffered growing up in Hawkins Laboratory. When she meets Mike, Dustin, and Lucas, she struggles to open up to them and trust that they have her best interests at heart. However, over time, she allows herself to be curious about Mike and the lives these people lead. She even puts herself in danger to help her new friends, knowing that she has the skills that they don’t.

At the end of the first season, Eleven realizes that her presence only attracts danger to her friends. So, she kills the Demogorgon and disappears with it. Season 2 finds her living in the woods alone before being discovered and taken in by Hopper, the Chief of Police in Hawkins. He prevents her from leaving the cabin, so the only way she can check in on her friends is by using her powers. Of course, this doesn’t last forever, so she escapes while Hopper isn’t home and finds Mike with another girl without understanding the context.

Later in the season, she embarks on a journey of self-discovery as she follows a trail to find her birth mother and learns a little more about her past. She also finds a group of other teenagers like her, and the entire seventh episode is dedicated to their time together. She realizes that this adventurous but violent lifestyle isn’t for her, and she returns to Hawkins with her newfound knowledge.

In season 3, she is even more committed to helping her friends and is willing to sacrifice herself for the greater good. She drains herself of her powers and loses Hopper (or so she thinks), but the Mind Flayer is no longer an imminent threat to Hawkins. After taking some time to find out who she really is without Mike or Hopper, Eleven feels more confident. She also has new friends in Max and Will and understands her worth as a person.

Lucas is the only colored main character, and this isn’t something the boys ignore. He often makes jokes that make his friends feel awkward, but it’s all in good fun. Like the others, he’s a nerd who enjoys D&D and Ghostbusters. He’s also the first to get suspicious and distrustful, but he usually has good reason to do so. In the first season, he’s quite mean to Eleven, who he keeps blaming for Will’s disappearance. He believes that she’s putting the Party in danger.

By the end of season 1, Lucas realizes his mistake in judging Eleven too early, and he apologizes. After splitting up with the Party and going his own way, he comes back to warn his friends that the Lab scientists are after them. He continues to stay loyal to the Party in season 2, though he’s definitely more worried about what Max, the new girl who has beaten their arcade records, thinks of him. Unlike Dustin, Lucas is honest with Max and tells her why he likes her.

In season 3, their relationship is a little strained but still enjoyable to watch. Lucas spends most of his time making fun of Max and being silly with Mike. Dustin now hangs out with Steve, while Will, having spent the end of his childhood in the Upside-Down, just wants to roleplay D&D.

Steve “the Hair” Harrington is Hawkins High’s popular boy. He seems like a typical jerk for much of season 1, though he truly does care about Nancy, Mike’s sister. He helps her study for chemistry, even though she’s already a straight-A student. But when she starts slipping away, he realizes his mistakes and tries to help her.

At first, he pushes her away, angry that he can’t have something that he wants. He even offers to scrub off “Nancy Wheeler Is A Slut” from the cinema’s list of movies showing, though it was either him or his friends who spraypainted it on there in the first place. The two get back together at the end of the season when it’s revealed that Steve has (through Nancy) gifted Jonathan a new camera for Christmas after breaking his old one (his most prized possession) earlier.

In season 2, Nancy realizes she doesn’t love Steve, and they break up. At first, he tries to get her back but is soon distracted by Dustin, who needs his help with something. The two become unlikely buddies, and Steve spends the rest of the season helping the children with their adventures and making sure they don’t die. Even after dropping Tommy and Carol, his status at school is further challenged by the arrival of Max’s brother Billy.

By the third season, Steve has graduated and now works at Scoops Ahoy in the new Starcourt Mall. There, he makes a new friend in Robin, who helps her and Dustin crack a secret Russian code. The trio, along with Lucas’s sister Erica, embarks on a journey underneath the mall, where Steve and Robin are captured by evil Russians. Dustin encourages Steve to be honest about his feelings towards Robin (having unlearned the lessons Steve taught him), but Steve learns that Robin is a lesbian. He accepts the confession without question, even teasing her about the girl she has a crush on.

Jim Hopper is the chief of police at Hawkins, which means he spends most of his time drinking beer or coffee, watching television, or smoking. He says the worst thing that’s ever happened in Hawkins is that a bird tried to make a nest of a lady’s hair. Of course, that all changes with the disappearance of Will, which he doesn’t take seriously at first. It gives him the opportunity to catch up with Will’s mom Joyce, with whom he seems to share a complicated past.

Hopper and Joyce become friends again, reconnecting over their shared trauma. Hopper’s young daughter died of cancer some years before the events of the show take place, and he struggles to talk about it for a long time, even pretending that his daughter still goes to school. Taking Eleven in helps him mature, even though he struggles with the responsibility for a long time.

In season 3, Hopper asks Joyce for advice on how to deal with Eleven and Mike, which drives the father-daughter duo apart. Of course, Hopper faces a grim fate at the end of season 3, but not before writing a letter to Eleven where he reveals all of his feelings. Another key part of his growth in season 3 is his relationship with Joyce, which seems to be heading towards something romantic. Throughout the season, he tries to convince her to stay in Hawkins, but his assumed death cements her decision in moving away.

Nancy is the straight-A student and bossy sister of Mike. She has a good heart, though, and refuses to end up like her parents. This – along with the disappearance of her best friend – is why she connects with the unusual Jonathan. She forgives him for taking stalkerish photos of her and comes to feel safe in his presence. When she’s with Steve, Nancy feels judged by his friends, Tommy and Carol, and after the abduction of her best friend Barb, she becomes too distracted to spend time with him. Instead, she teams up with Jonathan to search for both Barb and Will.

In season 2, after learning Barb’s fate, she continues to fight for her justice along with Jonathan. Together, they uncover the truth about the lab and shut it down, bringing media attention to Hawkins. Nancy continues fighting for what she believes in throughout the third season, where she and Jonathan intern at The Hawkins Post. There, Nancy is the subject of sexist discrimination and humiliation, but she doesn’t let this stop her from writing the story she wants to.

She goes rogue with Jonathan and learns that the Mind Flayer has greater plans than any of them had imagined. But the most significant part of her arc might her relationship with her mother, Karen. In season 1, she’s afraid to tell Karen anything, keeping her relationship with Steve – and her knowledge about Barb and the Upside-Down – a secret. In season 3, she goes to Karen for advice about the Post, and Karen inspires her, telling Nancy that she’s worth more than that. Nancy tells Karen that she gets her strength from her.