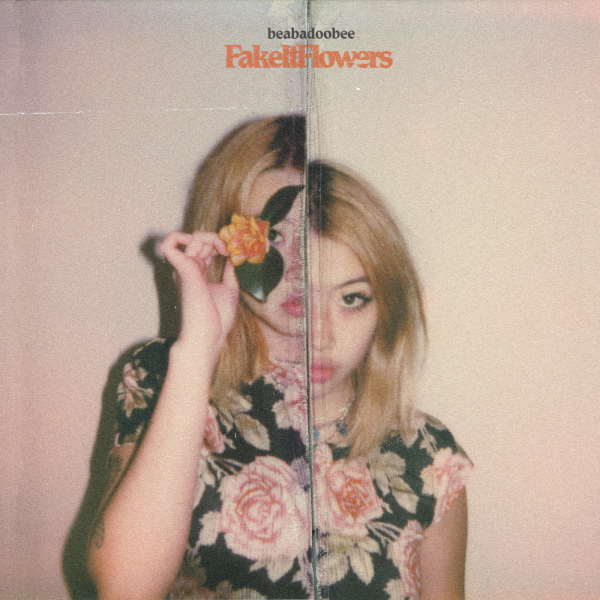 The fact that beabadoobee released her very first song, ‘Coffee’, all the way back in 2017 might come as a surprise to anyone who only became familiar with her music this year, when Canadian lo-fi artist Powfu sampled the track on his confusingly titled viral hit ‘death bed (coffee for your head)’. Her vocal presence is arguably the most enchanting element of an otherwise painfully mediocre remix, but the song quickly became a favourite on TikTok, thus introducing 20-year-old Beatrice Kristi’s bedroom pop sound to a new audience. Though it worked in context, it’s a shame that her voice was mostly reduced to a warped, ghostly echo; even on her second single – and still her second most popular song – her reserved vocals pirouette around those of fellow rising indie artist Oscar Lang as they deliver a heartfelt rendition of ‘Moon Song’ from the film Her.

Her debut full-length album, Fake It Flowers, is far from the first instance where her voice takes center stage, but there are certainly a lot more people paying attention this time around. Since first emerging in the scene, the London-based singer-songwriter has slowly been shifting away from her lo-fi acoustic stylings to embrace a more guitar-heavy sound that’s shamelessly indebted to 90s alternative rock. She’s not shy about wearing those influences on her sleeve, either; her previous EP, 2019’s Space Cadet, included the song ‘I Wish I Was Stephen Malkmus’, a direct tribute to the Pavement frontman. But on her debut, she’s crafted her most confident and polished artistic statement yet, a clear step forward for an artist still discovering her musical identity.

The majority of the songs here would work on catchiness alone, but Bea infuses them with enough personality to also make them emotionally engaging. Opener ‘Care’ bursts forth with bright melodies and a playfully scorning chorus, and the same kind of self-assured attitude carries over onto tracks like ‘Dye it Red’, which kicks off with the line, “Kiss my ass, you don’t know jack.” As cheerfully infectious as those tracks can be, they don’t quite match up to the intensity of the grittier moments on the album, like the ferocious climax of ‘Charlie Brown’ – closer to Nirvana than anything Coldplay ever laid their hands on – or the thrilling, grungy ‘Sorry’.

What makes beabadoobee’s take on 90s revivalism different and less derivative is that, as much as she attempts to recreate those sounds, she also displays a deeper understanding of what made them resonant in the first place. Adding string arrangements or sweet, poppy choruses to an otherwise heavy track doesn’t necessarily make it any less authentic, as long as they serve to enhance its emotional content; neither does juxtaposing them with the intimacy of a lo-fi acoustic cut. The stripped-back ‘Back to Mars’ may not have the endearing scruffiness of her bedroom recordings, but her vulnerable lyrics are more evocative than ever as she sings, “Take me to the south of France where we could just be old friends/ We’d go to the beach and you could braid my hair.” ‘Emo Song’ is another low-key ballad that, rather than feeling trite, manages to augment the lullaby-like qualities of Bea’s songwriting with waves of wonderfully dreamy synth flourishes.

Unfortunately, some of that inventiveness is lacking on later cuts like ‘Further Away’, which returns to the theme of self-empowerment but is held back by relatively generic songwriting. ‘Horen Sarrison’, named after Bea’s boyfriend, director Soren Harrison, is heartfelt and lusciously produced, but its stretched-out runtime makes it feel somewhat melodramatic, which doesn’t work as well when so much of the writing is anchored in earnest simplicity. Which is exactly what beabadoobee offers on the following track, ‘How Was Your Day?’ – delivering on the promise of the final line on ‘Horen Sarrison’ (“I want you to know that I’m in love”), it’s one of, if not the most hauntingly affecting and memorable song beabadoobee has ever penned. Strikingly raw and drenched in nostalgia, ‘How Was Your Day?’ contrasts the lustrous veneer that characterizes much of LP, as Bea recalls hazy lovelorn memories and stumbles over her own words in a way that’s genuinely heartwarming. It’s the kind of song that, much like Nirvana’s ‘Something in the Way’, could seemingly go on until eternity.

But despite exploring some dark subject matter, there’s a fair amount of optimism in what beabadoobee presents on Fake It Flowers, all the way to the exuberant, slightly absurdist closer ‘Yoshimi, Forest, Magdalene’, where she somehow references a Flaming Lips album, Forrest Gump, and the Pixies song ‘Magdalena’ all at once. The album can feel overproduced in places, and there are certainly areas for improvement – especially in the lyrical department – but it’s refreshing to hear an artist carve out something so personal at such an early age while drawing from overtly familiar territory. “I haven’t felt myself so comfortable,” she sings on ‘Dye It Red’, and that joy reverberates throughout the album.

Album Review: beabadoobee, 'Fake It Flowers'The fact that beabadoobee released her very first song, ‘Coffee’, all the way back in 2017 might come as a surprise to anyone who only became familiar with her music this year, when Canadian lo-fi artist Powfu sampled the track on his confusingly titled...