Apple has announced it has acquired worldwide distribution rights to The Velvet Underground, an upcoming documentary directed and co-produced by Oscar-nominated filmmaker Todd Haynes (Carol, I’m Not There). The film, which explores how the largely influential 1960s avant-garde group became a cultural touchstone, will have its premiere on the streaming service Apple TV+.

The documentary will feature “a treasure trove of never-before-seen performances and a rich collection of recordings, Warhol films, and other experimental art” as well as interviews with “key players” from the band’s era, according to a press release.

The project is being produced by Polygram Entertainment, Motto Pictures, and Killer Films, in association with Federal Films. Christine Vachon, Julie Goldman, Christopher Clements, Carolyn Hepburn and David Blackman are credited as producers. Though The Velvet Underground has no release as of yet, it joins a number of music-based originals for Apple TV+, including Bruce Springsteen’s Letter to You and Billie Eilish: The World’s a Little Blurry. 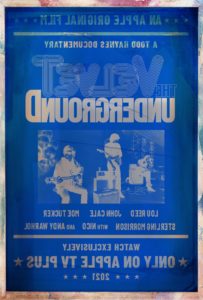