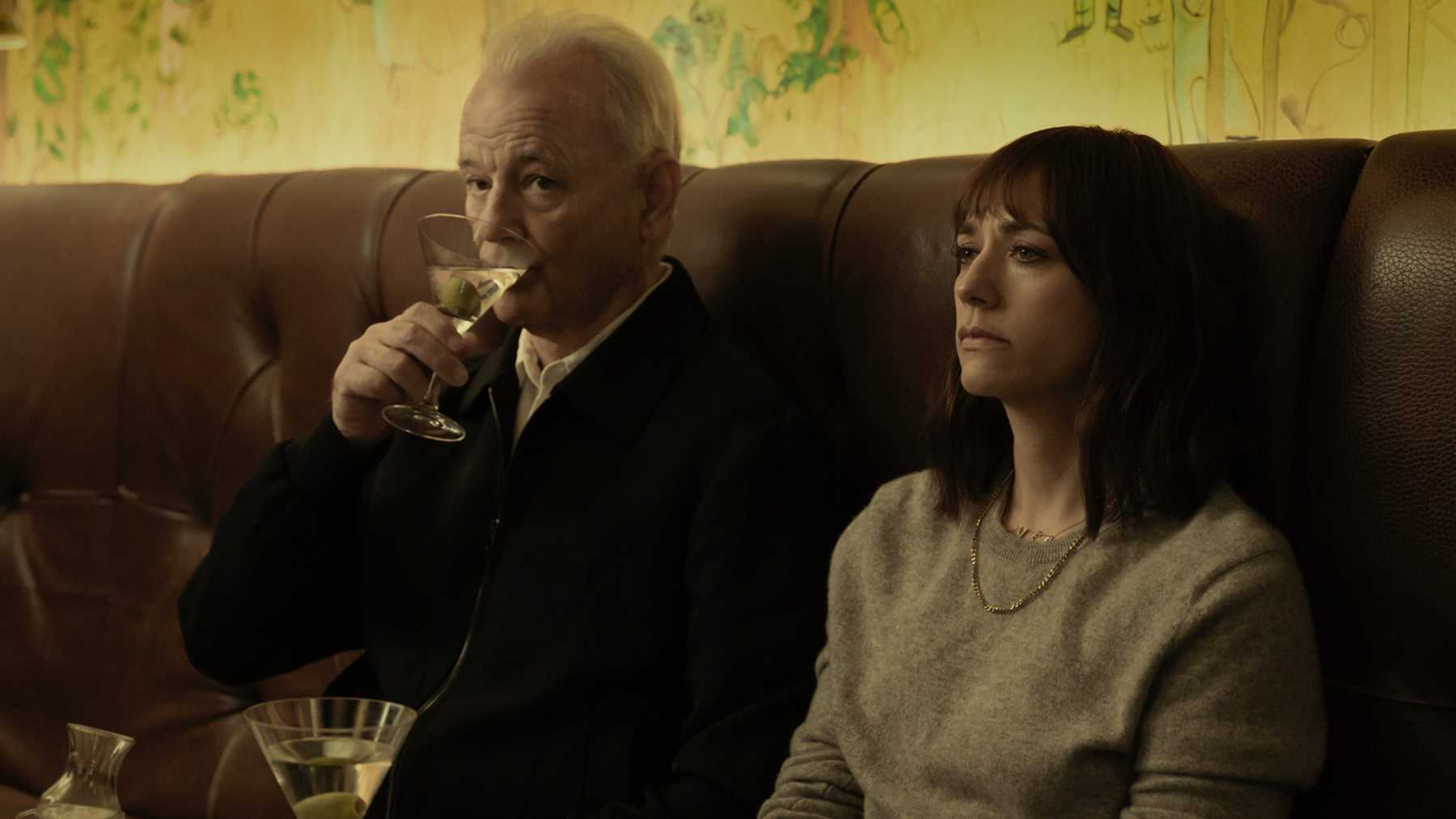 The Deceptive Simplicity of Sofia Coppola’s ‘On the Rocks’

Sofia Coppola’s work has often been accused of being overly stylish, culturally myopic, and generally void of substance. In what might appear to be a slight change of pace, the writer-director’s new movie, out now on Apple TV+, immediately presents itself as the her most conventional and accessible film to date, infused with a signature lightness of touch but running almost like traditional screwball comedy. And yet, it’s not long before one begins to sense the similarities between the film and Coppola’s previous directorial efforts: in addition to marking her creative reunion with Bill Murray, co-star of her 2003 masterpiece Lost in Translation, On the Rocks revisits the father-daughter dynamic that was explored on 2010’s underrated Somewhere as well as a hint of the adventurousness that powered 2013’s The Bling Ring. Following his excellent work on Coppola’s 2017 retelling of The Beguiled, Phillip Le Sourd’s cinematography is also once again unshowy but largely effective.

Few filmmakers are as adept at capturing a pervasive sense of loneliness and melancholy as Coppola, and in that regard, On the Rocks could almost be seen as a kind of spiritual sequel to Lost in Translation. The film centers on Laura (Rashida Jones, who also collaborated with Coppola on A Very Murray Christmas), a thirtysomething writer and mother of two who starts to suspect that her husband, Dean (Marlon Wayans), might be having an affair with his assistant (Jessica Henwick). She decides to ask her dad, Felix (Bill Murray), for advice, despite the fact that he’s a relentless womanizer with outdated and frankly chauvinistic views on love and marriage (“He’s man. It’s nature. Males are forced to fight to dominate and to impregnate all females,” he muses when Laura insists that her husband is not like other guys). When Felix suggests they take action, the two hunt for answers as they pursue Dean around New York City, and eventually beyond.

If the plot of the film sounds thin, it’s because it mostly is. But Coppola, as usual, is less interested in advancing a story than exploring the peculiarities of human behaviour, even if it’s less obvious this time around. Though it quickly becomes clear that On the Rocks is not really an interrogation into Dean’s potential infidelity as much as Felix and Laura’s relationship, the intricacies of that relationship are concealed underneath a more straightforward narrative formula. Felix’s intentions for helping his daughter, for instance, are uncertain – he treats Laura’s anxiety as an opportunity to impart her lessons about life, toeing the line between protective and possessive, but not always crossing. As for Laura, who appears to be close to her dad and even miraculously tolerant of his absurdist attitudes on sex, it soon becomes evident that the real reason she went to him in the first place was not to find out the truth about Dean, but to get answers from him – about his own infidelity and the effect his constant absence had on her and the rest of her family.

Rather than playing the irony of that situation for laughs, Coppola lets those unresolved tensions bubble under the surface. If On the Rocks is her most direct film to date, it’s not because it lacks nuance or sensitivity, but because she injects more of a personal touch to the story. From The Virgin Suicides to The Bling Ring, Coppola is known for adopting a detached perspective on her sometimes problematic subjects; with films like Lost in Translation, that post-modern detachment was part of what allowed viewers to project their own feelings onto the characters. Almost the exact opposite is true of On the Rocks, which takes cues from the director’s own life in a way that feels more intense than any of her previous films. Drawing inspiration from her experience growing up in the male-dominated spaces of Hollywood, the film cuts back on some of the ambiguity that’s characterized her past work, favouring a more heartfelt approach that allows for both empathy as well as critical self-reflection.

Not unlike The Virgin Suicides, which told the story of the Lisbon girls from the point of view of its voyeuristic male narrators, On the Rocks opens with a voice-over from Felix, who tells a younger version of Laura not to give his heart to any boys. “You’re mine,” he says over a black screen. “Until you get married. Then you’re still mine.” To which Laura responds: “Um, okay, Dad.” Merely by being about the male gaze, The Virgin Suicides was also about ownership, and that same idea foregrounds On the Rocks. But where The Virgin Suicides proved to be less the story of the Lisbon girls than the narrators who were obsessed with them, On the Rocks clearly belongs to Laura, who, unlike the Lisbon girls, has her own voice, and is quick to use it to dismiss Felix’s outmoded theories (including one about women being men’s property). In addition to expressing her embarrassment at his inability to refrain from flirting with everyone from a waitress to his granddaughters’ ballet teacher, Laura is also open about the ways his behaviour personally impacts her: “You have daughters and granddaughters,” she reminds him after he suggests he’s growing deaf only to female voices, “so you’d better start figuring out how to hear them.”

It’s the kind of emotionally potent moment that forces you to rethink just how harmless Felix’s sensibilities really are, and it’s not the only example where Laura confronts her father throughout the film’s relatively short running time. Not only does she obviously reject the idea that he has any kind of authority over her, but she also refuses to accept that he doesn’t have control over his own behaviour, which is basically his excuse for the hurt he’s caused over the years. Even when Felix, who normally exudes an unbreakable aura of cool, explains why he left all those years ago with an earnest kind of vulnerability, Laura jumps back by saying, “You’re such a baby.” And just as Murray brilliantly renders the character more pathetic than genuinely charming, Coppola, who knows a thing or two about the world of Hollywood, avoids inadvertently upholding the masculine ideal that Felix represents and that the movie industry she grew up in helped shape. By stepping away from her highly stylized visual aesthetic, she instead renegotiates her own relationship with that system and attempts to chart a new path forward.

But though On the Rocks eschews the ambiguity of Coppola’s past work, its simplicity is deceptive. Far from a surface-level study of old-school sexism, the film not only delves into the complexities of the father-daughter relationship at its center, but also scrutinizes how Felix’s privileged position allows him to abuse his power. Crucially, though, Coppola treats both her subjects with empathy and nuance; Laura puts her father in his place, but it’s implied she does so not just out of anger at him, but also because she’s conscious of the ways in which his flaws are reflected in her own behaviour. Even when it comes to Felix, Coppola is less interested in mocking or dehumanizing the character than breaking that façade and exposing the real fragility (and, naturally, loneliness) behind it. Where other films would tend to overdramatize any animosity between the two characters, On the Rocks gives them space to co-exist, which leads to some genuinely refreshing interactions. After Laura tells Felix that he’s “such a baby”, for instance, she doesn’t just get up and leave, and neither does Felix try to change the subject; instead, what follows is an unusually honest conversation where both parties seem equally interested in hearing one another.

Some may criticize On the Rocks for its abrupt and somewhat predictable ending, but as previously noted, the film’s ostensible plot matters much less than the father-daughter relationship at its core, and Coppola is careful not to give that narrative thread an unrealistic conclusion. It might not end up being as iconic as the final scene in Lost in Translation, but On the Rocks offers a similar kind of poignant moment as the two characters say goodbye, even if you don’t need exhaustive theories about what Murray’s final words are. After all, the film isn’t Coppola’s most mature work to date because, say, its soundtrack trades the wistful shoegaze of My Bloody Valentine for the cool jazz of Chet Baker and Bill Evans (thankfully, Phoenix haven’t changed all that much), but because it sees the dreaminess in Laura’s own adventure – one of motherhood, domesticity, and the complexities of modern love – and decides it’s just as wonderfully exciting as any.