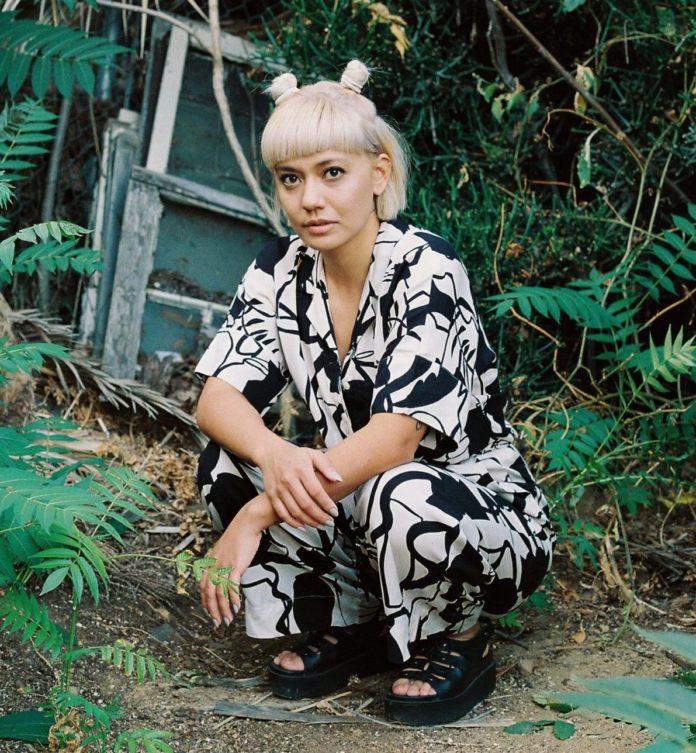 Having spent years much of her teenage years jumping from one band to the next in the music scene of Detroit, vocalist and songwriter Lianna Vanicelli started writing and recording her own music under the moniker Xelli Island shortly after moving to Los Angeles. Working closely with producer and longtime friend Jon Zott, she recently released her debut EP Meet Me at the Waterfall, a dreamy, unabashedly sentimental collection of pop songs as infectious as any. The sparkly, sensual ’02 20 20′ sways with an effervescent kind of optimism, while ‘When You Go, You’re Gone’ delves into the feeling of missing someone or something with haunting vulnerability; Xelli’s vocals are subtly distorted as she repeats the word “gone”, meshing with the melodies in the background and accentuating that sense of profound loss. Though Zott’s production is airy and lush and the hooks are nothing but catchy, Xelli’s expressive vocals always manage to stand out – on the lovelorn ‘Bad for You’, she delivers the titular line with the sort of confidence you’d expect from someone who’s been serving up tunes like this for years, while the pensive ‘I Know I’m Only Dreaming (Nag-iisa)’ features one of her most subdued but emotionally affecting performances. It’s not such a surprise that Xelli Island’s music feels exactly like what the project’s name would suggest – its own island – but she’s only just started exploring all its little nooks and crannies, and we can’t wait to hear where it takes us next.

We caught up with Xelli Island for this edition of our Artist Spotlight series, where we showcase up-and-coming artists and give them a chance to talk about their music.

What’s your earliest memory of playing or feeling deeply connected to music?

Probably when I was like 9 or 10. I would sit in my bedroom and listen to CDs for hours while reading through the lyric booklets. ‘Show Me The Meaning of Being Lonely’ by The Backstreet Boys was definitely one of the first songs to hit different.

You grew up playing in different bands since you were 14. Do you feel that being a solo artist has given you more creative freedom?

100%. I’ve been in quite a few bands over the years and you always end up compromising. It has been so refreshing to not have to think twice when it comes to creating. You cut out a lot of the back and forth and overthinking and just end up doing what you really love and want, which I think makes for a more authentic project.

Do you follow any particular process when it comes to constructing your songs?

Not always, but I’ve found that the best way for me is to start with just piano chords and vocal melodies. My producer Jon and I have been writing that way lately and it’s been amazing. We get all of the structure, melodies, and chord patterns done before adding anything else. Then we add all of the sounds to make it Xelli, I write the lyrics at home, and then we cut vocals and produce it out. Those are usually the best songs.

What were some of the inspirations behind Meet Me at the Waterfall?

It’s an EP that reflects on love and loss. Not just in a romantic sense. ‘When You Go, You’re Gone’ sounds like it would be about longing for a person, but it’s actually about how much I miss playing shows (it’s been almost 2 years). ‘I Know I’m Only Dreaming (Nag-iisa)’ is about someone losing a family member or partner to death, I wanted to make that song because there is so much death happening on a global level due to Covid this year. Half of it is sung in Tagalog because I’m half Filipino and it’s been crazy that we’re all experiencing the same fears throughout the world. ‘Bad For You’ was inspired by high levels of dopamine and actually falling in love with someone who I knew would probably break my heart.

What was it like collaborating with your friend and producer Jon Zott?

It’s honestly the best. We’re both from Detroit now living in LA and we go way back. He knows my musical journey and so there was already this deep understanding when started working together. And it’s just really fun, he’s one of my closest friends so it’s all very casual and easy. Our style mesh really well so the songs come naturally.

Do you have a favourite song from the EP?

Probably ‘02 20 20’. The day that it was written was just such a special but also ordinary day. I will forever be nostalgic for it. It was right before Covid hit and my friends and I were feeling so excited and hopeful for the future. The song itself captures that collective feeling and it brings me back to a more simple time.

How do you feel now that the project is out into the world, and what are your plans for the future?

It feels great to have a body of work out and I feel proud of it and excited for people to connect with it. I’m even more excited about what we’re working on now. I always feel like every release is a stepping stone to the next, and the project keeps evolving and becoming better. I’m going to keep releasing music next year and start getting a live show together and eventually play shows one day (hopefully). I’ll also be releasing a ‘Meet Me At The Waterfall’ cassette with the EP and a bunch of dope remixes of the songs soon!

Meet Me at the Waterfall is out now.