Bonnie ‘Prince’ Billy and Matt Sweeney have shared a new collaborative song called ‘Make Worry for Me’. Recorded at Nashville’s Butcher Shoppe, the new track follows the Superwolf collaborators’ charity single ‘You’ll Get Eaten, Too’, which dropped back in March. Check out ‘Make Worry for Me’ below, along with the single artwork, made by Harmony Korine.

“An apparition you can’t explain is cutting through the viscous mist in your brain. The contents of your pockets are suddenly unfamiliar. That sound again –

This year of super wolf moon brought A Visitation and the message, “You’ll Get Eaten, Too.” Now, in the earthly chaos of total celestial blackout, one body containing two galaxies is once more among us…

This is no miscount – this is the bestial duo, the two headed dawg, the Superwolves: Matt Sweeney and Bonnie ‘Prince’ Billy, talking directly to our face. They know no fear, only curiosity. “Make Worry For Me” is manifesto, and we can only hope to learn from it. To grow from it. For limbs to extend, beneath its blue, electric sky. To become Super, like the Superwolves.

The gauntlet is thrown. You’re dancing with the wolf again. Brooding and grooving upon their prey. Succumb to their ritual. Move your ass. Sing their song. Fight. Or die.”

In recent weeks, Will Oldham and Bill Callahan have been sharing a series of collaborative covers, offering their take on Steely Dan’s ‘Deacon Blues’, Yusuf / Cat Stevens’ ‘Blackness of the Night’, and Dave Rich’s ‘I’ve Made Up My Mind’. Their rendition of Hank Williams, Jr.’s ‘O.D.’d in Denver’ also featured Matt Sweeney.

‘Make Worry for Me’ Single Artwork: 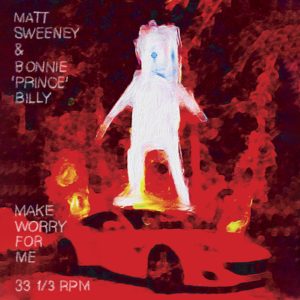