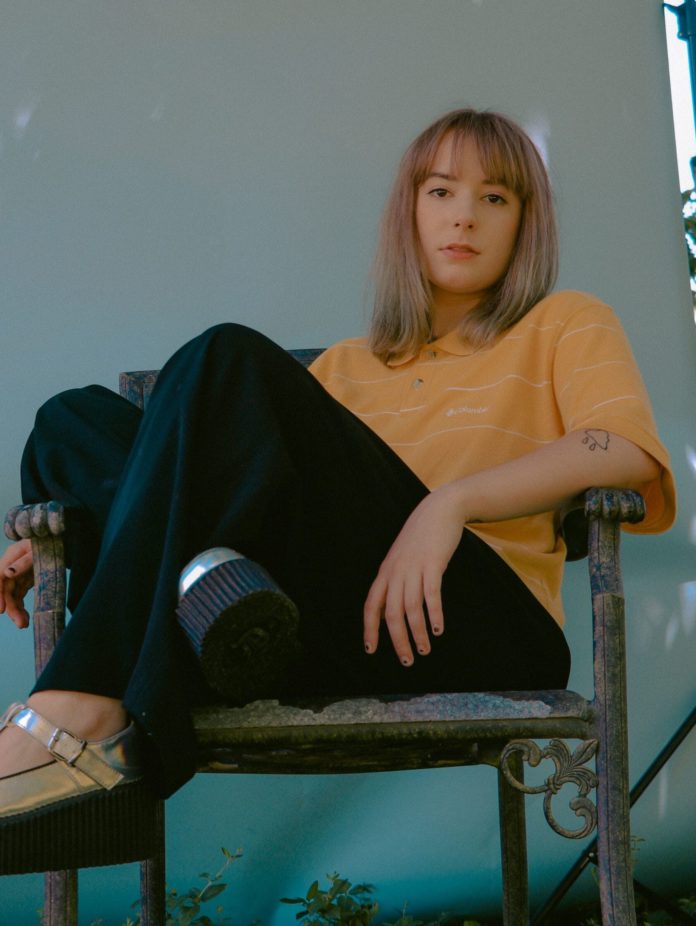 In a world saturated by bedroom pop, 19-year-old Kansas-based Jordana Nye, aka Jordana, has been stoically carving her own path through in genre since 2018. Her first single ‘Canvas’ introduced us to her raw, emotionally charged songwriting. With the expanded re-release of her debut album Classical Notions of Happiness in March of this year, Jordana displayed the true expanse of her sound: a culmination of her upbringing, where she was encouraged to play piano by her father – she switched to violin and then subsequently guitar, ukulele, and bass to name but a few – and her own experiences as an adolescent, the expanded LP plays with glorious variety. Scattered with ethereal, feather-light and vocally sparse tracks like delicately sombre album opener ‘Remembering U’, ‘Interlude’, and throbbing ‘Losing It’, there’s a sensitivity that runs alongside the smart guitar-led tracks like ‘Calvary’, ‘Crunch’, and ‘Jackie’s 15’. Since her debut, she’s collaborated with producer Melvv on two EPs: Something To Say and …To You, which in turn have been combined to form her sophomore album, Something To Say To You, out December 4 via Grand Jury. Lead singles ‘I’ll Take It Boring’, ‘Big’, and ‘Forgetter’ showcase Jordana’s ability to orchestrate intricate, finely balanced and vocally impressive bedroom pop, while ‘Divine’ and ‘I Guess This Is Life’ possess a driving energy that’s offset by her penchant for exploring the vast range of human emotion in a truthful and honest manner.

We caught up with Jordana for this edition of our Artist Spotlight series, where we showcase up-and-coming artists and give them a chance to talk about their music.

It seems like a pretty basic question, but it’s one that’s important to ask particularly in these… trying times. How have you been coping with this Covid world? Has there been anything specifically that’s kept you afloat?

I will not lie, I have had so much trouble writing, especially with nothing to really do…other than that…and work my dishwashing job at the local brewery…I have so many hours to record but sometimes nothing comes out. However, I have had the pleasure of going to the studio through this (and getting tested) and that is where I get out all of my emotions in my songs out usually. There is a lot of brain racking, lots of replaying the song to find out exactly what I need to say and how to say it, and lots of crying (this is good tho bc the emotions have been acknowledged and are now in a song I am proud of!!! Yay!!). But one thing that has really been keeping me afloat is of course the people listening to these songs and telling me how much it means to them; people telling me where they heard it for the first time, how they listened, and how it made them feel in that moment. That’s all so important and it’s happening more and more and reminds me how much it is so worth continuing to pursue, even from when I was 9 wanting to do this for my life.

How did creating two EP’s to form one LP change the meaning of the songs featured?

Creating the two EP’s to form the LP was originally my label’s idea, but it ended up working out perfectly to get the first half done and mixed so I could just keep writing and release when I was ready!

Following on from the previous question, how did you approach making Something To Say and To You? Do you see them as separate entities or did you approach it as a singular LP that you then split out?

Melvv and I definitely talked about how these EP’s have two different atmospheres, where Something To Say is more vague and To You is more direct, but when they all come together, the atmospheres collide, with different emotions in a matter of minutes, throughout the album, with all of the different genres we touch.

If you could only listen to one artist for the rest of your life, who would it be and why?

Right now I would say Toro y Moi. They have everything from dance bops to crank the volume up to like ‘Freelance’ and ‘So Many Details’ and chill, mellow beats to study and relax to like ‘Drive It Down’ and ‘Omaha’.

When you want good honest feedback on your music when it’s at the early stages, who do you turn to? Who’s the person who you know will offer helpful words of wisdom or constructive criticism?

I send it to Jef (Melvv who has produced most of my music) and he gives me his honest opinion. Sometimes I will send it to some friends that are in different states, and they give me their opinion; I don’t really show people much anymore because I guess I want it to be perfect before anyone else hears it?? So I don’t really have a person I turn to for that other than my manager or the person I work on the music with because we are usually all in the same room and by the time the session is done, we usually have an idea of what we want and we just sit there with a diabolical smile because we know it’s fye. 😈😆

Is there a specific feeling that comes with making a track that you know is great? Is there a moment of “Oh yeah… I’m onto something here”? For reference, for me, that sounds like the one minute mark in your latest single ‘I Guess This Is Life’ where the drums disappear and the focus snaps back to your vocals. The effect is just beautiful, you have your listener enraptured.

Ohhhh yessss!!! Even with the first session I did with Melvv, we started writing ‘Crunch’. This was in December of 2019. We wanted to set up the live drums at Sparta Studios and Marvy Ayy was our studio engineer and he was testing out the drum levels by playing a hard ass beat in four and Jef just started recording and we got the entire thing and chopped it to fit a seven time signature. And we just kept going from there and it was so natural. Then we added the bass with distortion and the harmonies and the guitar and we were like…. “damn…we really did something huh 😳…”

Also thank you! Yes I love taking the beat away then slamming it back in it, is very satisfying to the ears.

You’ve always been very open and honest in your music in terms of documenting the wide variety of human emotion that you experience. This is particularly shown on your debut album Classical Notions of Happiness and has continued through to your musical output currently. Is this something you set out to do consciously or was it more natural in its fruition?

I would say both. The first album wasn’t even really an album until I looked at all these different singles I had piled up and was like, “I want a place to put these! Let’s slap em on an album and fill in the rest!” but it wasn’t all that easy at that time. Especially because I had really only been recording for a year and I was getting so frustrated with myself to come up with things and to work my way around the programming. Plus, emotions are important for writing songs and there were still days I had to experience to really actually get the emotions out to finish it at the time I said I would. With a lot of pent up emotions over time from shit happening, it just takes a while to dig them out and just put them into words to even know what is really going on because you get overrun with so many at once. Or sometimes, you’re just completely numb. It was one or the other at that time. Either way, it’s a mix of knowing you have the natural capability of playing music, but having to force the motivation when you feel most unmotivated, uninspired, depressed, or most of all, when you can’t feel anything at all.