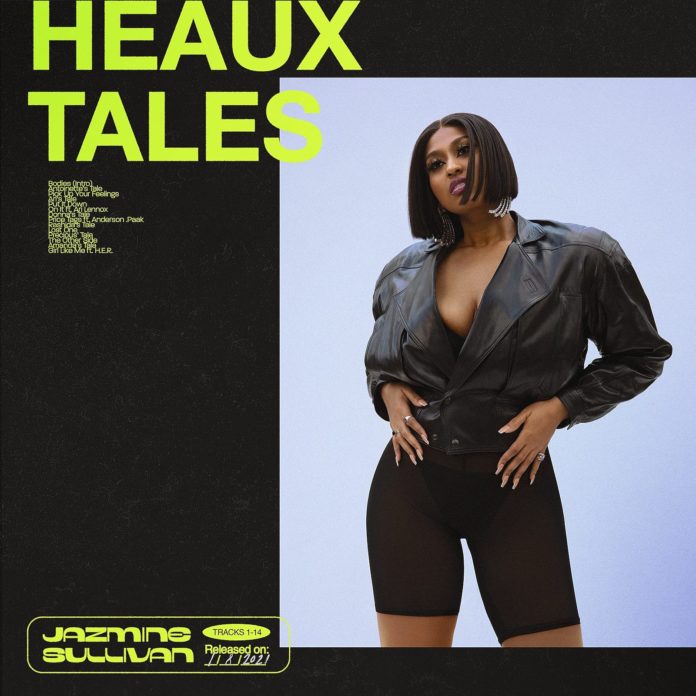 On its surface, Jazmine Sullivan’s Heaux Tales might seem like a lesser project than any of the R&B artist’s previous outings. The first reason is kind of obvious: clocking in at just 32 minutes, her fourth full-length effort is short enough to be categorized as an EP, even if it feels more substantive and insightful than dozens of albums in the same vein that somehow deliver a lot less in double the time. But beyond that, it also relies on a considerably (and deceptively) simpler palette than her previous albums, particularly her incredible 2015 LP Reality Show, where the songwriting was as dynamic as the hooks were immediate. On its long-awaited follow-up, Sullivan doesn’t narrow her scope as much as renew her focus, alternately zooming out of and zeroing in on the complicated frameworks of love and sex that have defined her music in the past; the result is her most fully-realized and nuanced work to date.

Sullivan has always been an incisive songwriter as well as an impassioned singer, but Heaux Tales highlights another one of her gifts as a storyteller: here, she hones in on her ability to stitch together different narratives and identify a common thematic through-line while acknowledging their messy contradictions. Centered around spoken word vignettes from different women that were reportedly inspired by real events, the album serves as a deft exploration of the relationship between sex and power; Sullivan uses each story as a prompt which she then amplifies in song form, allowing each individual perspective to shine before infusing them with her own voice and personality. In the first interlude, a woman named Antoinette Henry asserts her own agency over her body, and follow-up ‘Pick Up Your Feelings’ finds the narrator – here identified as the Other Woman – reaffirming her worth in a romantic relationship. The track also boasts one of the album’s most infectious performances as Sullivan delivers the titular line, throwing an extra “oh” before “feelings” that punctuates all the implications of the word with invigorating precision.

There’s a clear sense of narrative progression throughout the album, with each ‘tale’ uncovering new layers that contribute to a greater sense of cohesion while playing up their unique specificities. Sullivan’s aim might be to shed light on the sexual politics nestled inside these personal truths, but her reflections here are more than just intellectual: songs like ‘Put it Down’ and ‘On It’ openly lean into the physical side of carnal desire without ignoring its dynamic contexts, instead tracing the journey of demanding fairer treatment from the other party. At times reining in and flaunting her powerful voice, Sullivan makes lines that may have come off as silly in the hands of a less talented singer sound delightfully funny: “But he’s so big, call him King Kong/ When he call me up, he like, “Ding dong”,” she raps on ‘Put it Down’.

Heaux Tales may lack a certain vitality or commercial appeal that has characterized Sullivan’s previous efforts, but it’s a testament to her storytelling ability that the experiences she relays feel both lived-in and communal despite its relatively short runtime. The album also contains some of her most poignant songs yet: standout single ‘Lost Ones’ opens with a spare guitar melody whose liquid tone sets the stage for Sullivan’s grief-stricken lyrics, each vocal harmony oozing with a sense of loss before arriving at that all-too-familiar plea: “Don’t have too much, don’t have too much fun/ Please don’t forget about me.” Collaborative cuts like ‘On It’ and the Anderson .Paak-featuring ‘Pricetags’ are among the album’s most vibrant moments, but the project’s relatively minimalist sonic backdrop often makes even her lone yet agile vocals feel like she’s in conversation with her own self; on the textured opener ‘Bodies – Intro’, they sound more like a delicate dance.

Rather than leaving you wanting more, Heaux Tales has you marveling at how Sullivan manages to distill these narratives in a way that reveals their core without diminishing their impact. If the album’s thematic tread feels incomplete by the end, it’s because there are no easy answers to the questions she poses; Sullivan has described the album as being about “today’s women standing in their power and owning who they are,” but the project is as concerned with channeling sexual empowerment as it is with underscoring the bleak realities that may come with it. “I ain’t wanna be/ But you gon’ make a hoe out of me,” she sings with a kind of painful resignation on the H.E.R.-assisted ‘Girl Like Me’. It’s a strikingly somber note to end the album on, but at this point, it should come as no surprise.

Album Review: Jazmine Sullivan, 'Heaux Tales'On its surface, Jazmine Sullivan’s Heaux Tales might seem like a lesser project than any of the R&B artist's previous outings. The first reason is kind of obvious: clocking in at just 32 minutes, her fourth full-length effort is short enough to be categorized...