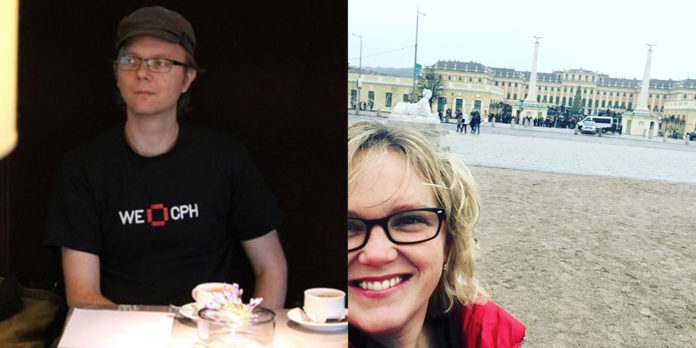 Fifteen Questions is arguably the most prominent music website that interviews dozens of music-minded people around the world on a consistent basis. The online magazine is lead by two music media veterans Tobias Fischer and Lara Cory. To talk about Fifteen Questions, they joined us for an interview.

Firstly, how are you and what is your background?

Tobias: Doing well, thank you! Still healthy and getting ready for a few days of rest here in Berlin … I’ve been a journalist and copywriter for almost twenty years. During this time, I’ve written for hardcore metal magazines, classical music publications, experimental music sites as well as Germany’s biggest magazine on recording, Beat. I’ve also written a book about the sounds of animals with Lara. 15 Questions was the only way to bring all of my interests in music under one umbrella, which actually seemed to make sense.

Lara: I’m not sick or dead so things could be worse. Being a writer was never on my horizon, so it was a bit of a spontaneous thing when I started writing 12 years ago. I started writing about art and food and then began to include music and film. I’ve been freelancing for about 10 years now, writing for digital and print media and copywriting at agencies. I’m hoping to complete a collection of short stories that I hope someone might want to publish some day.

How did Fifteen Questions start, and how did the idea for it came about?

Tobias: It started as a questionnaire for my first own website, tokafi, which ran between 2005 and 2015. The original idea was to have a modular interview, which could be applied to almost all kinds of artists and where questions could be swapped and replaced depending on the occasion.

Even though 15 Questions is now a site of its own, I think the basic concept is still the same: Allow everyone in music – mostly artists, but also PR agents, organisers and journalists – to talk about some of the most important topics, from production via originality to the creative process and science. Readers can place the interviews side by side and compare the replies. In 200 years time, future generation can then discover what artists thought about music in another era.

Have the questions changed over the years, or they have tended to stay the same?

Tobias: If you take the original set of questions from 2005 as a yard stick, not a single question has remained intact. Every few years, I will re-evaluate and adjust them, depending on what seems to work and what our interests are. The current iteration has proven particularly effective and it’s remained unchanged for quite some time. I’m looking to apply a few changes in 2021, though.

You have interviewed various amounts of creatives from the music world, has there been a key trait or element that they all share?

Lara: On the contrary, it’s their differences that make the site work, and keep us interested.

With such a vast experience of asking quality questions, is there a specific question you are always eager to ask and why?

Lara: I always like to read what people have to say about originality and getting into a creative mindset. It’s usually the best measure of honesty.

Tobias: The one about different senses working together. I have a specific kind of synaesthesia and always used to think that this made my experience of music very different. It probably is, but we have a section about synaesthesia in the interview and what it revealed is that there doesn’t seem to be one standard way of how we perceive sound. We all hold very strong opinions about music, but ironically, we may all be talking about different things!

Is there a question that tends to divide people, or receive an adverse reaction?

Lara: The last question seems to get people enthused, either about their fear of what the future holds or their excitement about its potential.

Tobias: Yeah, that one’s always good for a little controversy. Although that may be because the wording is slightly provocative itself …

Do you feel the answers get better with certain types of genre artists?

Lara: No. I am consistently surprised and delighted by the randomness.

Tobias: What we do notice, on a very fundamental level, is that the type of music you play influences your focus. Classical instrumentalists rarely have something revealing to say about technology, for example, while electronic producers can obviously go deep on sound related questions. But, as Lara said, there is a big element of surprise there – the best interviews tend to be the ones where you get a fascinating reply where you would never have expected one.

Is there anyone you would love to interview in the coming year?

Lara: Mike Patton, this year or any year.

Tobias: Kraftwerk. Not going to happen, but I keep telling myself that if Ralph Hütter ever does an interview again, it’s going to be for 15 Questions.

Do you have a favourite interview you’ve conducted?

Lara: I have so many. But of the recent interviews, I’d have to go with Alain Johannes, Alessandra Novaga, Ilia Belorukov and Natali Kruger.

I remember getting a lot out of David Keenan’s interview and being impressed by Pauline Oliveros’ ability to say so much with so few words.

Tobias: This year alone, we’ve had an incredible run. We’ve conducted 200 interviews and among them have been a lot of personal favourites. I really appreciate artists who approach their art passionately, but are then able to communicate that experience into deep thoughts. For examples, take a look at our interviews with Carl Stone, Ella Minus, Louisahhh, Tyler Friedman, Chris Korda, Wild Anima, Sean O’Hagan, Chloé Raunet / C.A.R., Diana Combo / Síria, Golem Mecanique and Jochen Rueckert.

Was there an interview you’ve done that has not gone well?

Tobias: We sometimes get back interviews where you can tell that the artist didn’t enjoy doing it. Interestingly, some of those turn out particularly interesting! One example is Miss Kittin. I think she hated having to go through all these questions and seemed exhausted in the end – but the result was intriguing to say the least.

Lara: I remember once when we first started, I accidentally confused Otto Von Shirach’s interview for Scott Morgan’s (Loscil). I was extremely embarrassed when I realised the mistake I’d made, especially after I’d emailed Scott asking if he might try again with his answers. I still shudder to think of it all these years later. If you read the two interviews, you’ll understand. Scott was really good about it, and luckily we were able to laugh about it later.

Thank you for joining us!