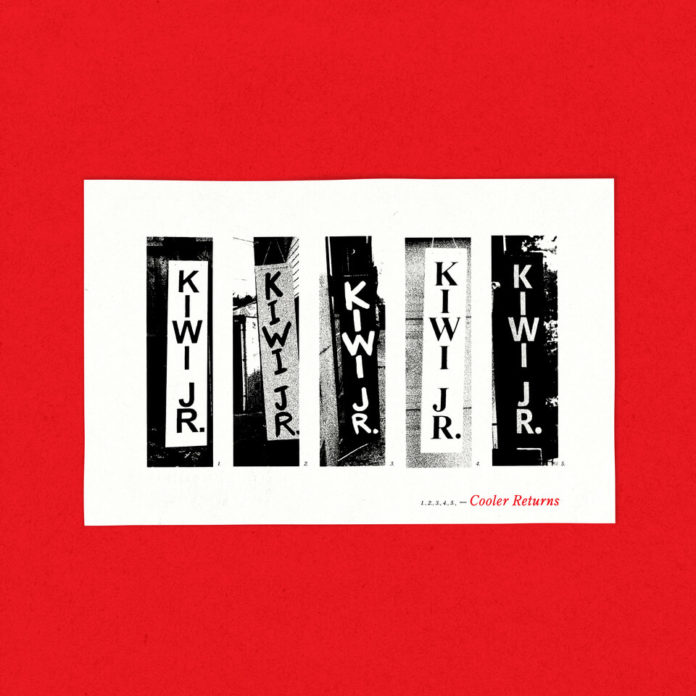 Too much has changed since Kiwi Jr. issued their full-length debut Football Money in early 2019, or even since the record received a wider release from Persona Non Grata in January of last year. The fact that the Canadian power pop outfit have managed to stick to their guns on its aptly titled follow-up, Cooler Returns, is an impressive achievement in itself – one could argue they’re simply applying the same formula, but making dependability part of your brand while unfailingly retaining the music’s most enjoyable qualities – in the midst of a global pandemic, no less – is certainly no small feat. Fans can rest assured that everything that made their debut so instantly likable is readily available on their latest effort, though “effort” feels like an ill-fitting term when their knack for delivering easy hooks and witty one-liners seems to come so naturally.

That seemingly endless supply of hooks and snappy melodies should be more than enough to render Cooler Returns an indisputably fun listen, but Kiwi Jr. also prove they’re capable of evolving their sound while very much leaning into their strengths. The quartet is still far from shy about wearing their influences – most obviously Pavement, but nods to acts like The Strokes and R.E.M. are also prominent – on their sleeves, nor do they manage to distance themselves from contemporaries like Parquet Courts, but their attempt at refining their craft is both palpable and largely effective. The songs here are bejeweled with subtle touches of piano, harmonica, and organ that lend them a wonderfully organic feel while augmenting their mid-fi slacker rock aesthetic. Songs like ‘Dodger’ and ‘Waiting in Line’ rely almost exclusively on a variety of acoustic instruments that are both richly rendered and refreshing, as if to remind us there’s nothing manufactured about the band’s approach no matter how neatly tailored it may sound.

When those electric guitars do kick in, they ring out with the sort of effervescent clarity and coolness that’s made their music so irresistible in the past. As the title track moves into its final segment and layers of guitars begin to stack on top of one another, you can track almost exactly what direction each of them will take, but they’re so exquisitely blended that predictability becomes a non-factor. There’s enough colour in the album’s light, jangly arrangements to prevent them from coming off as bland, but its scruffier moments also offer a glimpse into what the band are able to achieve when they loosen their grip and allow a song to breathe for more than two and a half minutes. Those tighter structures can make for an invigorating pop song, but they also can have the effect of stifling their more playful and rambunctious tendencies.

Such a move would also help elevate frontman Jeremy Gaudet’s wry storytelling, which remains one of the group’s strongest assets. His acerbic sense of humour leads to more than a few quotable lines: “I was falling apart in the green room/ While you drank half the headliner’s rider,” he recalls on the opening track ‘Tyler’; ‘Nashville Wedding’ has him wanting to “strangle the jangle pop band,” and he makes sure the irony escapes no one. Kiwi Jr. seem to be hyper-aware of what they’re doing at almost every moment, which makes even the most absurd lyrical turns land better than they otherwise would. But as gifted as the group might be in stringing together catchy yet endearing jangle pop tunes, and even if their sound continues to show subtle signs of maturity as it does here, a little risk-taking would go a long way to amplify the unique elements of their songwriting that are too often buried under its sleek veneer.

Album Review: Kiwi Jr., 'Cooler Returns'Too much has changed since Kiwi Jr. issued their full-length debut Football Money in early 2019, or even since the record received a wider release from Persona Non Grata in January of last year. The fact that the Canadian power pop outfit have managed...