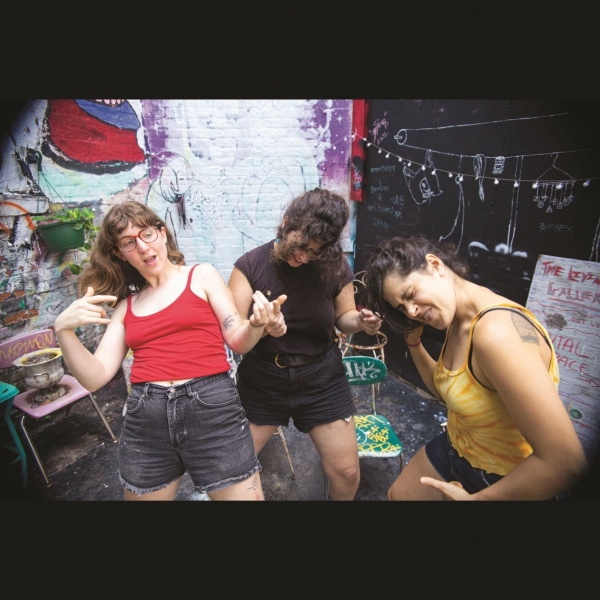 Palberta know their way around a hook. This might sound like a strange thing to say about one of the scrappiest and most experimental punk groups around, but knowing your way around a hook means more than just being able to craft it: when the New York City trio covered Bee Gees’ ‘Stayin’ Alive’ all the way back in 2017, they dismantled everything that makes it the sleekest of disco tunes and warped it into a minute of harrowing cacophony. With their fifth studio album, Palberta5000, they bring together their natural propensity for dissonant guitars unconventional song structures with a sincere appreciation for mainstream pop artists like Ariana Grande and Justin Bieber, two names you’d probably never expect to come across in a Palberta review.

But if the primary purpose of a pop collaboration like Grande and Bieber’s ‘Stuck with U’ is to get a hook, well, stuck in your head, the members of Palberta – Ani Ivry-Block, Lily Konigsberg, and Nina Ryser – seem more interested in joining forces with the intention of drilling as many of them into your scalp as possible. That is certainly the case with ‘Big Bad Want’, which is one of the longest cuts here yet consists primarily of the lyric “Yeah, I can’t pretend what I want” repeated dozens upon dozens of times. Unlike other tracks on the record, Palberta offer virtually no twists and turns or subtle embellishments; the repetition becomes less of a musical tool than a weapon aimed back at oneself, less an affirmation of the narrator’s presence or desire than a reflection of the kind of perpetual anxiety that grows harder to ignore the more you try. Even as the prime candidate for the most frustrating song on the album, the way it manages to creep under your skin is a testament to the group’s ingenuity.

Palberta’s ability to convey such primal experiences partly comes down to the fact that it feels like the three women “share a brain in a lot of ways,” as Konigsberg put it in a 2018 interview. Besides taking turns on bass, drums, and guitar, the way they trade vocal duties on the album also leads to some of its most vivid and layered harmonies, which feel not so much like agents of chaos as much as the only unified force capable of navigating it. The conditions under which Palberta5000 was recorded also help amplify the group’s dizzying intensity; the 16-track album is the result of a four-day recording session at engineer Matt Labozza’s Hudson Valley studio, with no track captured in more than three takes.

That the album contains Palberta’s tightest arrangements and most accessible songs to date should thus come as no surprise, but it’s also a point that also does little to describe the actual music. Clocking in at almost four minutes, ‘Big Bad Want’ is one of the record’s obvious outliers; the three-piece still specialize in short bursts of unruly energy, even if this time its thornier edges are tempered by a more straightforward pop immediacy (‘Corner Store’, ‘Red Antz’).  But the track is also an example of how the album’s longer cuts tend to be its most impactful, not just because of the fact that they take up more space but also because they find more interesting ways to explore it. ‘All Over My Face’ pulses with scuzzy, offbeat defiance, while ‘Fragile Place’ melds delicate melodies with a propulsive heaviness, and ‘Before I Got Here’ brings the album to a close with a militaristic kind of splendour that seems to carve out diverse paths for the group going into the future.

It’s when Palberta push their sound to its outermost limits that the result feels not just playful but also challenging and evocative. If pop songs strive to present a firm case for the structures that uphold them, a song like ‘Fragile Place’ works because the way it builds tension serves to underline the brittleness of those same structures to disqueting effect. Unfortunately, some of the album’s absurdist lyrics often do more to alienate the listener than leave a lasting impression or meaningfully contribute to those dynamics. But when it spends less time paying tribute to hot breakfast dishes (like on the sonically dextrous ‘Eggs n’ Bac’) than it does approximating the messiness of the human mind, its more difficult qualities can feel like an extension of sympathy: “I will be there with my hand on your chest,” they sing on ‘Cow’, “I feel your rumbling internal mess.”

Album Review: Palberta, 'Palberta5000'Palberta know their way around a hook. This might sound like a strange thing to say about one of the scrappiest and most experimental punk groups around, but knowing your way around a hook means more than just being able to craft it: when...