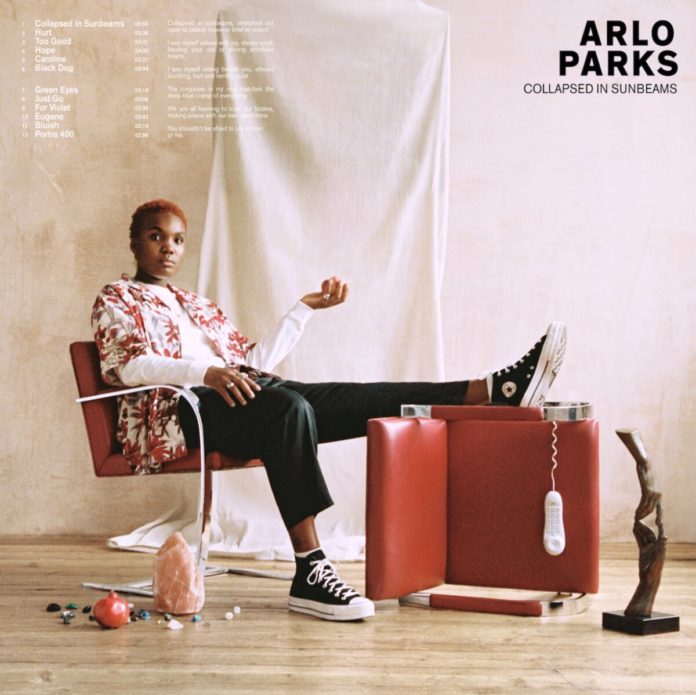 Handled with less care and empathy, some of Arlo Parks’ attempts at providing comfort in times of crisis might come off as familiar platitudes. Following a string of highly successful EPs and singles, the London singer-songwriter’s hotly-anticipated debut is filled with such affirmations of hope: “Just know it won’t hurt so/ Won’t hurt so much forever,” she promises on ‘Hurt’; on a track simply titled ‘Hope’, she intones, “You’re not alone like you think you are/ We all have scars, I know it’s hard.” Typical of Parks’ songwriting, both songs are marked by a stark specificity in the verses that gives way to a more universal framing in the chorus: ‘Hurt’ introduces us to the character of Charlie, who “drank it ’til his eyes burned/ Then forgot to eat his lunch,” while the latter is about a friend, named Millie, who “tried to talk the pleasure back into being alive/ Reminiscing ’bout the apricots and blunts on Peckham Rye.”

Being pegged as the voice of a generation certainly has its drawbacks, but the reason Parks’ songs resonate so widely comes down to her ability to invite the listener into what appears to be an intimate conversation and make them feel seen. You can come up with a myriad ways to undermine or subvert cliché, or you can take the more useful path of imbuing it with meaning and affect – which Parks does by treating her words more like gestures of generosity. ‘Collapsed in Sunbeams’, the title track that also opens the album, is a spoken-word piece that not only establishes Parks’ poetic lyricism, but also reveals the way she tends to approach her subjects: she starts by establishing her point of view (“I see myself…”), before bringing others in (“We’re all learning…”) and ultimately utilizing the unique power of the second person: “You shouldn’t be afraid to cry in front of me,” she says, then mutters, “I promise.‎”

Collapsed in Sunbeams is populated by an assortment of different characters, but their struggles – often relating to issues surrounding mental health, queerness, identity, and body image – bear at least some resemblance to those of Charlie and Millie. Most intriguingly, Parks is equally adept at relaying the experiences of those close to her as she is at harnessing the poetic gift of writing about strangers: with its gentle simplicity and candid songwriting, ‘Black Dog’ is among the best of the first category, while ‘Caroline’ – a song about watching a couple argue while waiting for the bus – stands out in the latter. But even when trying to spin a narrative out of a 30-second conversation, she pauses briefly to call attention to the moment we can all relate to: “I saw something inside her break/ Everybody knows the feeling.”

Though Parks’ perspective is never quite distant, the songs that center more on her own experiences possess a different kind of emotional directness. Over a lilting instrumental, ‘Green Eyes’ recounts the story of a queer relationship that quickly falls apart due to societal pressures, highlighting how those pressures can in turn erode one’s sense of self-worth and disrupt the process of self-discovery. Meanwhile, ‘Eugene’ is one of the few points on the record where Parks’ voice can be seen as carrying a hint of bitterness: “You play him records I showed you/ Read him Sylvia Plath, I thought that that was our thing/ You know I like you like that/ I hate that son of a bitch.” But even then, Parks’ conversational tone is laced with the kind of sensitivity that makes it feel more like an ode to friendship than a pang of envy.

In terms of its production, the album is at its best when it gives Parks’ lyrics room to shine, or when the reverb-heavy guitars and spacious synths accentuate the warmth that underlies her soft delivery rather than dampening it. Even if the influence of Radiohead’s In Rainbows, Portishead’s Dummy, and The xx’s self-titled debut is prominent on many of the tracks here (Parks is interestingly not the only rising Gen Z star whose debut heavily draws from that particular Radiohead album, but she even goes as far as to reference Thom Yorke directly), it’s a sound that she and producer Gianluca Buccellati incorporate tastefully throughout the LP. In fact, it’s mostly when Buccellati is absent from the production – like on the groovy but flavourless ‘Too Good’ or the laid-back electronica of ‘Bluish’ – that the music lacks the texture and depth of feeling Parks so aptly captures in her lyrics. Indeed, the fact that the deluxe edition of the album comes with “lo fi lounge” renditions betrays the album’s occasional tendency to convey more of a vibe than a compelling sonic vision.

But on the whole, Collapsed in Sunbeams is a deeply affecting and delicately crafted debut. One can easily imagine how utilizing more of her diverse range of influences might have led to a somewhat more eclectic and distinctive-sounding effort, but in retaining her focus, Parks has managed to preserve the emotional impact and simple optimism of her message. On the closing track, ‘Portra 400’, she recognizes the beauty in “making rainbows out of something painful,” which echoes an Audre Lorde quote Parks has often referred to: “Pain will either change or end.” Here, none of the characters’ pain seems to really change or end. But through her incisive observations and mellow, unshowy vocals, Parks is capable of articulating its looming presence in a way that, if not powerful enough to alleviate it, can at least make the air feel a little bit lighter.

Album Review: Arlo Parks, 'Collapsed in Sunbeams'Handled with less care and empathy, some of Arlo Parks’ attempts at providing comfort in times of crisis might come off as familiar platitudes. Following a string of highly successful EPs and singles, the London singer-songwriter’s hotly-anticipated debut is filled with such affirmations of...