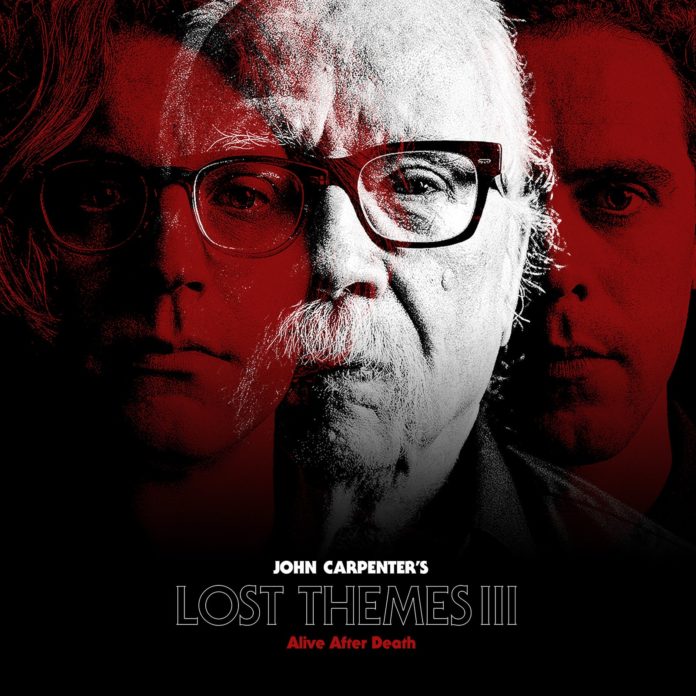 Not content with directing and scoring some of the greatest pictures in the history of cinema, John Carpenter has also spent recent years putting out albums full of amazing electronic cuts, together with his son Cody Carpenter on guitar and godson Daniel Davies on keyboards. Known collectively as Lost Themes, the records have gained as many plaudits as his films, perhaps more, and now the third in the series, Lost Themes III: Alive After Death, has arrived.

Of course, it sounds like the album should be a soundtrack, with track titles like ‘Turning the Bones’ and ‘Dripping Blood’ that could be mistaken for coming straight from In The Mouth of Madness or Prince of Darkness, but one benefit of Lost Themes III not being made for a film is that its musical flow doesn’t feel like it was manufactured after the fact. That isn’t to say you couldn’t just grab one of these cuts and throw it onto the soundtrack of a film; this is John Carpenter unexpurgated, and any of this music would undoubtedly contribute great things to whatever movie it was added to. But that aside, this is Carpenter back to reclaim his birthright from the imitators that have infiltrated the “synthwave” area of electronic music in recent years and made it a little too homogenous. This is John Carpenter and his brethren in an old and rusted ’59 Cadillac Coupe de Ville wearing dusters and carrying shotguns. Alive after death indeed.

And the title track itself, which opens the record, immediately fires those synapses that remind you what a joy it is to get a new Carpenter record, establishing the tonal architecture with a duel between an icy melody and a circuit pattern; Davies delivers a wavering solo that feels like it’s setting up the stakes before the piece abruptly finishes and you’re immediately confronted with the brutal three-note groove of ‘Weeping Ghost’ and its incredible bridge of doom. There’s a beauty in letting that threatening wave muscle in like the overhead rumble of a chopper, and then hear the fluorescent synth explosions in the background, popping off like a thousand blinking lights in the night.

What’s fascinating is the way Lost Themes III effortlessly mutates from the intense neo-retro vibe most commonly associated with Carpenter to a future-gothic touch that unleashes the kind of apocalyptic dread that underpins so many of his films. With the haunting sampled chorus and claustrophobic guitar, ‘Dead Eyes’ feels like it’s closing in around you, while ‘Vampire’s Touch’ uses a low beat combined with ethereal tides that would be below zero if you were to touch them. But it’s ‘Cemetery’ and its sawing line that feels the most dangerous: The trio runs back to back and each conjures that sense of inevitability, that moment where everything is going to hell and it’s clear that there is no way that you’re going to win. As a Carpenter character might say, you’re fucked.

Which makes it all the more riveting when it all turns around, and those keyboards and guitar are again weaponized. ‘Skeleton’ introduces a strikingly optimistic melody that starts to build to something triumphant, echoed by Davies’ harmonizing, before ‘The Dead Walk’ sets up a final battle, opening with a huge gothic organ statement before leading to a pairing of a laser beam groove and a more traditional piano. It’s here where we get something exceptional, a thrilling section where the piano takes the spotlight; it’s a wonderfully unexpected spectacle that makes the interjecting guitar moment even more effective, with the reprisal of the laser beam and Davies executing beautiful high notes contrasting the thundering electronic beat.

The album closes with a return to the piano, now dominant, in the mesmerizing ‘Carpathian Darkness’. Carpenter, Carpenter, and Davies’ paths are now fully converged with the track segueing into a combination of piano and what sounds like a theremin patch, before merging with organ and chorus. With the addition of a final twinkling coda, the record’s culmination is both extremely satisfying and emotionally fulfilling.

Lost Themes III feels like something that Carpenter has been leading to for a while. The series as a whole was already pseudo-transcendental, but this album feels like the title does it a disservice. Yes, of course, it’s the same style that Carpenter has been using for his film music, but while, as already mentioned, any of this music could be used in a film, the point is that it doesn’t have to be: It stands out as a great record in its own right.

Album Review: John Carpenter, 'Lost Themes III: Alive After Death'Not content with directing and scoring some of the greatest pictures in the history of cinema, John Carpenter has also spent recent years putting out albums full of amazing electronic cuts, together with his son Cody Carpenter on guitar and godson Daniel Davies on...