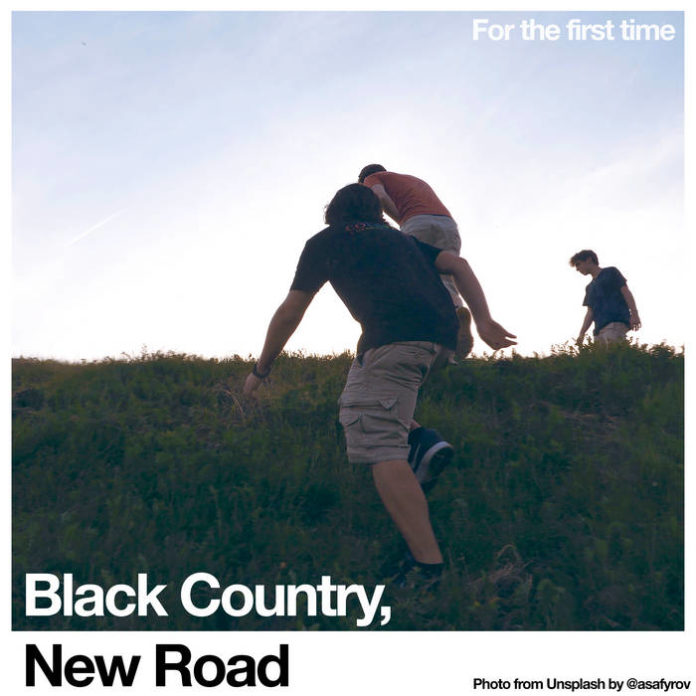 It’s not so hard to earn a reputation as an enigmatic act when you only have a couple of singles to your name. To be hailed as one of the most exciting – even best – bands in the world, however, perhaps not so much. Yet London seven-piece Black Country, New Road, who formed in 2018 and have now come through with their debut studio album, For the first time, managed to achieve exactly that, despite the fact that coverage of the band has often tended to focus on their similarities with other acts in the UK’s burgeoning post-punk scene. Vocalist Isaac Wood winkingly acknowledges the band’s kinship with both their forebearers (“fled from the stage with the world’s second-best Slint tribute act”) and their contemporaries (“I told you I loved you in front of black midi”) in his lyrics, but those references mostly serve to accentuate the unique qualities that set them apart.

Trying to describe these qualities by using genre identifiers like free-form jazz, post-rock, and the Jewish tradition of klezmer – all of which are part of BCNR’s riveting stylistic blend – quickly proves to be a futile effort. Instead, you’re more likely to capture and appreciate the band’s sound if you pay attention to the contributions of each member accompanying Wood’s often absurd but impassioned musings, from Lewis Evans’ frantic saxophone to Georgia Ellery’s sweeping violin; Charlie Wayne’s agile drumming, Tyler Hyde’s menacing bass, and May Kershaw’s twitchy synths also form the backbone of the unnerving opening track and provide startling dynamics throughout the album. Though there seem to be virtually no limits to the band’s creative instincts, all seven members are perpetually in sync with one another, carrying momentum even when their incendiary crescendos come closer to approximating uncontrollable chaos.

But as original as BCNR’s approach undoubtedly is, the band have managed to preserve the aura of mystery that now pervades not just their image but their music. Part of it comes down to framing: you could start from the fact that their name came from a random Wikipedia generator, or the odd choice of using an image from Unsplash as the album’s cover. But structurally, too, there’s a sense of distance between Wood and the listener; considering the second line on the record is “And write the words I’ll one day wish that I had never said” (in reference to a previous version of the song, which Wood felt failed to capture his intended meaning), the fact that the first track is an instrumental could be interpreted as a form of reluctance, but ends up highlighting the band’s chemistry as a force to be reckoned with. Elsewhere, the strange scenarios Wood paints in his lyrics further enhance that chasm: “I’m not so vividly within this song; I’m more of an outsider,” he said of the album’s mind-blowing centerpiece, ‘Science Fair’, and it’s a perspective that finds its way into different corners of the record.

A misused sense of ironic detachment is often the biggest detriment when it comes to bands of BCNR’s ilk, but the album’s framing rarely registers as either overly satirical or anonymous. Wood’s wry humour, his endless series of “references, references, references”, or the band’s relentless experimentalism are not here in place of a personality – Wood’s vocal inflections belie a range of conflicting emotional states, a constant search for new identities that masks a deeper existential crisis. “I am invincible in these sunglasses,” he declares on the stand-out ‘Sunglasses’, but in relaying that particular scene, reveals his true state to his audience: “Cars are going “beep, beep, beep”/ And there are so many roadmen on this street/ And they cannot tell that I am scared.”

As inscrutable as Wood’s writing can be, it never detracts from the complexity or resonance of BCNR’s music, and For the first time serves as a dazzling display of the heights that music can reach. An unlikely highlight, and one that nimbly showcases the more evocative side of the band’s sound, comes near the end with ‘Track X’, which somehow manages to juxtapose the line “in the same room where we fucked as kids” with the tenderness that later seeps through in the form of a feather-light melody and soft backing vocals. Wood has described the song as a “glimpse” of their new material, which one can only hope will be a bit more substantive than this six-track effort, and maybe even a bit more open. For the first time ultimately leaves you with more questions than it answers – and I guess, in some way, that’s part of the magic of a really good first impression.

Album Review: Black Country, New Road, 'For the first time'It’s not so hard to earn a reputation as an enigmatic act when you only have a couple of singles to your name. To be hailed as one of the most exciting – even best – bands in the world, however, perhaps not so...