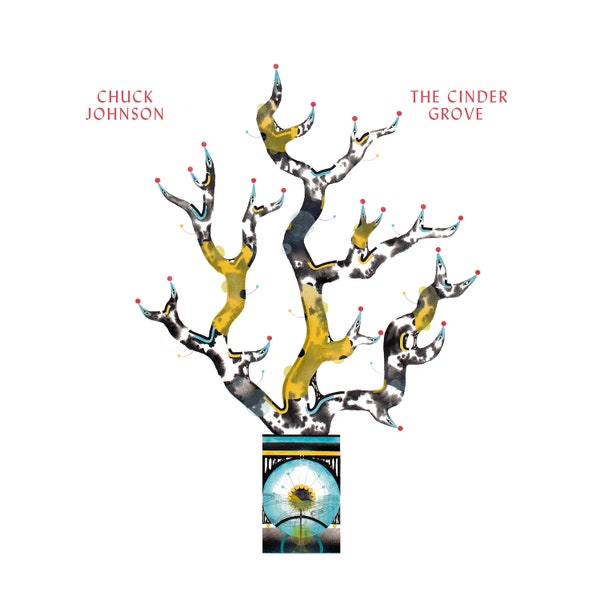 A quick glance through the self-penned notes for Chuck Johnson‘s latest album, The Cinder Grove, is enough to tell you that this is an artist who not only takes his craft seriously, but who approaches it with thought and ambition. Take the fact that, for this record, Johnson dug through archival recordings to extract reverb and echo qualities from specific physical locations that he wished to sonically recreate. It also says much that the composer and pedal-steel guitarist has performed at both the Liverpool Festival of Psychedelia and the San Francisco Electronic Music Festival. Based in Oakland, CA, Johnson’s long list of works include solo guitar albums, a collaboration with the multi-instrumentalist Thrill Jockey artist Marielle V. Jakobsons, and a host of film and TV soundtracks.

Released via the wonderfully adventurous Glitterbeat Records, The Cinder Grove is presented as “a suite of requiems for lost places.” It features Johnson on pedal steel, synths and organs, alongside the aforementioned Jakobsons on violin, Hilary Lewis on viola and violin, Crystal Pasucci on cello and Sarah Davachi on piano. ‘Raz-de-Marée’ opens the set with a mantra-like organ refrain which loops softly as the music evolves to incorporate steel guitar lamentations and otherworldly overtones. It is no wonder that Johnson’s work is so sought-after by film producers; this meditative yet highly-engaging piece evokes a grab-bag of human emotions, from yearning to acceptance. There is nothing ‘ambient’ here, as Johnson breathes life into the track through subtle shifts and sparkling nuance.

‘Serotiny’ echoes the best of Michael Oldfield and Terry Riley, transforming electronic sound into a visceral and expansive expression of beauty and hope. Johnson finds the perfect balance between stability and advancement as waves of reverberating synth spread like ripples in the metaphorical pond of humanity. The lightest of touches steers this track here and there, opening bright gaps in the clouds, uncovering pathos in the rain.

‘Constellation’ succinctly outlines with its title the scope and breadth of a piece that flings itself over a deep blue blanket of resonating sound, displaying pin-pricks of shimmering loveliness. It breathes in and out like some fantastical and benign cosmic beast. By the time you reach ‘Red Branch Bell,’ a track “inspired by the harmonic language of Estonian composer Arvo Part,” you will find yourself completely under Johnson’s spell. Titanic blocks or icebergs of vibrating magic rise and fall as glittering circles of strings circle around them.

Album closer ‘The Laurel’ brings us gently back to ourselves with a miasma of slowly-pulsing bioluminescence under which meadows of synth roll and flutter, and over which floats Johnson’s pedal-steel. It is one of the most delicate tracks on this album, an unfolding vista of sound-shapes and tones. “In California, the laurel under-brush that grows throughout the coastal redwoods, pine, and oak woodlands represents resilience to fire and hope for restoration,” writes Johnson, “I felt like this image and the uplift of this track was the appropriate one to end the album.”

The sheer amount of detail contained within The Cinder Grove is astonishing. On this album, Johnson’s mastery of musical time and space is coupled magnificently with his talent for blending acoustic and electronic sounds, rendering it a grand statement on a human scale. Fans of Riley, Eno or John Surman’s works for ECM will find much to treasure in these expansive, mesmerizing explorations.

Album Review: Chuck Johnson, 'The Cinder Grove'A quick glance through the self-penned notes for Chuck Johnson's latest album, The Cinder Grove, is enough to tell you that this is an artist who not only takes his craft seriously, but who approaches it with thought and ambition. Take the fact that,...