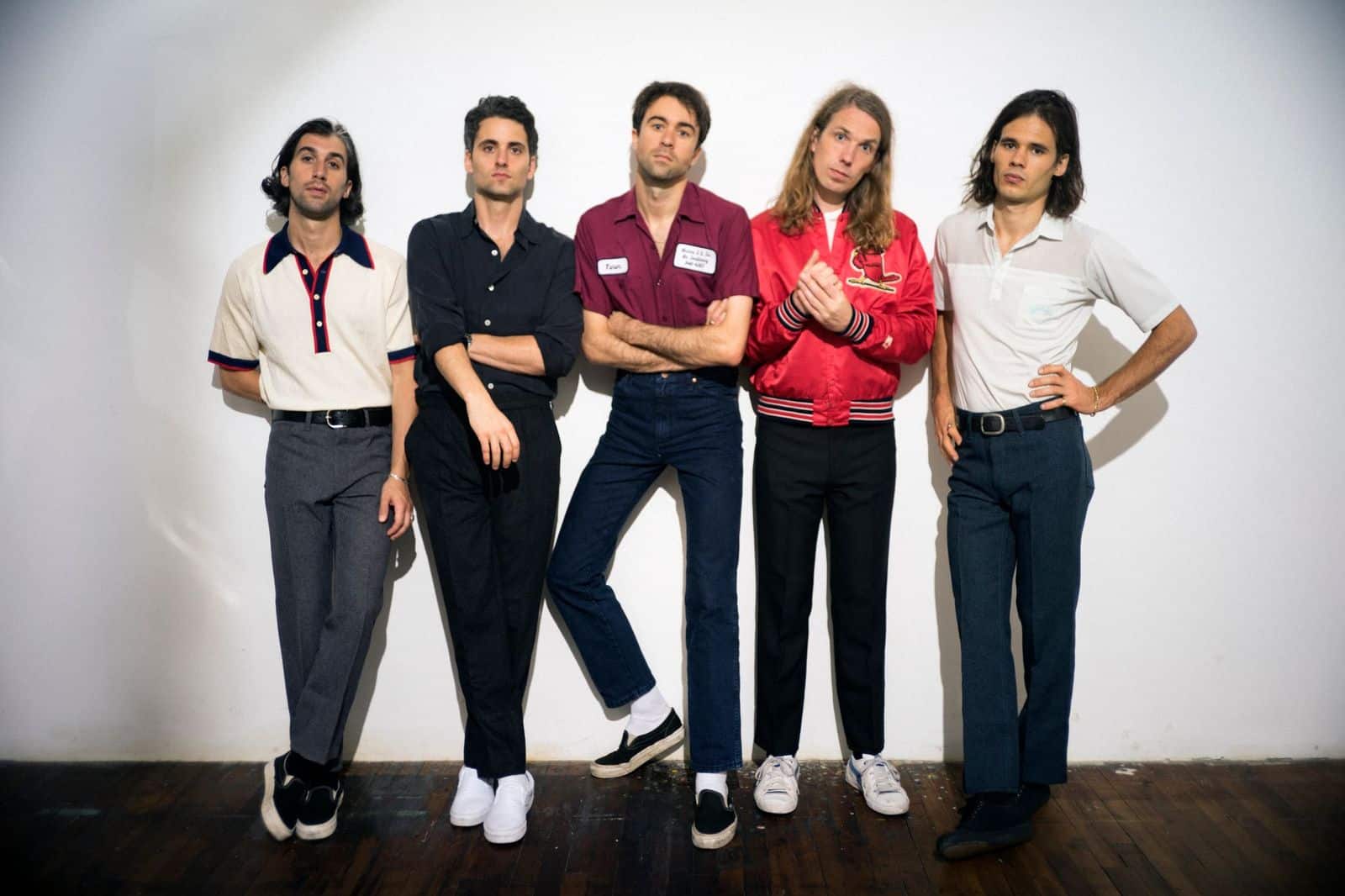 When the Vaccines’ debut came out ten years ago, you could hardly find a review that didn’t include some pun on the album’s title: What Did You Expect From the Vaccines? And while googling that question now might redirect you to the WHO website, frontman Justin Young remains focused on the music, even if he admits the situation has made reposting Instagram Stories “a bit of a logistical nightmare.” (“Someone mentioned that maybe we should do a co-headline tour,” The Coronas’ Danny O’Reilly joked.) In addition to working on the Vaccines’ fifth studio album, which he promises will be out “very soon,” he started a side project with the group’s keyboardist Timothy Lanham called Halloweens, whose first LP, Morning Kiss At The Acropolis, came out exactly one year ago. Just this month, the Vaccines also put out the covers EP Cosy Karaoke, which includes stripped-back renditions of songs by Queens of the Stone Age, Waxahatchee, Kacey Musgraves, and more, and announced a 10th anniversary pink vinyl reissue of their debut featuring a previously unreleased demos album.

We caught up with Justin Young via Zoom to talk about what to expect from the Vaccines’ upcoming album, how the pandemic has affected the band’s process, making Cosy Karaoke, and more.

I see you’re wearing a Halloweens T-shirt – I was actually listening to that album this morning, and I live not far from the Acropolis…

I have to say, it’s a bit of a strange contrast when you’re stuck inside and the weather is cold.

I saw the snow – someone sent me a DM with pictures of snow on the Acropolis the other day.

Yeah, that was crazy. We haven’t seen snow like that here in ages. What was it like shooting the video for one of the singles here?

For the video for that song [‘My Baby Looks Good With Another’], we landed in Athens and we didn’t have any of the stuff so we spent the day running around music shops before we got on our ferry trying to find the guitar and everything for the video. It was really cold. It was a super fun day, actually.

From my understanding of the timeline, after you released Combat Sports in 2018, there was kind of a renewed focus on live shows and you toured extensively for a couple of years. And then you started the Halloweens side project, and you recorded and recently finished mixing the new Vaccines album, and just this month you released the covers EP. Between all that, has the pandemic affected your process in any way or caused you to reshift your focus more into songwriting and production?

On multiple levels, I think, really. First off, with the music we already had recorded, it afforded us some time to put the brakes on to refine what we’d done in Texas at the end of 2019. So we were able to do a bunch of additional production, and we actually wrote an extra song for the record. It gave us a little bit of time to reflect and actually not just look back but look forward as well, and think, “Okay, how do we want this to exist in the world?” and have a bit more time on the creative and the visuals for what will be the next record. And then maybe slightly more negatively, I definitely think from a songwriting perspective, everyone I talk to is kind of suffering from the same thing a year in, and that is that if you’re not living life, it’s very hard to write about it. I definitely feel that as a songwriter you’re sort of dealing with the dregs at this point, and you kind of want to get back out and live in technicolor again and hopefully that’ll start working its way into the creative process.

Hopefully we’ll get to the album later on, but I wanted to take a moment to ask you about Cosy Karaoke. The last time you put out a covers EP was in 2013. How did the idea for this one come about? Did you work on it remotely?

Yeah, we worked on it remotely. And I guess that’s sort of where the name came from, the fact that we’re taking these kind of karaoke songs and sing-along songs and we’re doing them in our bedrooms and rather quietly so as not to annoy our neighbors. It was just something fun to do and to keep us occupied. We wanted to choose songs we’d kind of been listening to when we were making the record and that sort of thing, but it’s just a very innocent, not particularly well-thought-out bit of fun, really.

It’s an interesting selection of tracks – the ones that stood out to me the most were the Waxahatchee and Kacey Musgraves covers; firstly just because ‘Fire’ is so recent, and then they’re both kind of country-leaning. Why did you choose these two songs in particular?

Obviously, we’re big fans of both of those artists. Funnily enough, ‘Fire’ was one of my favorite songs from last year, but then I was listening to the Song Exploder episode and discovered it had been recorded at the same place we recorded our new album, so that was a nice bit of coincidence. And you know, we did make the record in Texas but we certainly weren’t listening to country music on repeat. But something I love about Kacey Musgraves is, I suppose she is loosely a country singer, but it sounds so of-the-time and modern and in no way dated, like it can compete with the best of pop.

I guess it comes from working on it remotely, but the project does have almost a bedroom pop vibe. Has that made you more comfortable with using electronic instrumentation in general?

That’s something I think anyone that is making music in their bedrooms leans heavily on, and I think, actually, we’ve always been quite comfortable and inspired by that sort of stuff. But I think Combat Sports, our last record, was obviously very much kind of a live band in a room-sounding record, but that doesn’t necessarily align with all of our tastes and what we’re listening to and stuff. I think that this next Vaccines record is definitely the most heavily produced. And that obviously predates Cosy Karaoke, but I think when you’re creating, your focus points are always shifting and you’re looking for new ways to stay inspired, whether that’s when you’re writing or arranging or even rehearsing or performing.

When you say heavily produced, that actually makes me think of English Graffiti, which I’m a fan of as well. You’ve said this one is heavier than anything you’ve done before, and you’ve also called it the best Vaccines album so far. What is it that this album has that the previous ones didn’t?

Well, I think it’s got a bit of something all the previous records had, but hopefully a lot more… Hopefully a lot more, I guess that’s the end of that sentence. [laughs] You know, when you make music, you’re hopefully on this never-ending process of refinement, you’re hopefully getting better every time – I suppose that’s rarely the case but it’s at least the aim. And I just think that for the first time maybe since the first record, we’ve kind of had an idea and we executed it, you know. I think the lyrics are stronger, I think the musicianship is stronger, I think the production’s really strong. And I think, unlike with English Graffiti, which I love that record too and I’m really proud of that, but I think the sort of concept was maybe stronger than a lot of the songs, and I feel like all the stars aligned for us creatively this time. I just feel everyone was at our best, everyone really brought their A-game. I don’t think we could have made a better record – I probably say that after every record, but I truly feel it at the moment.

You’ve also said that some of the songs have taken on a new resonance during the pandemic. Is there more of a running theme this time around in terms of the lyrics and the concept as a whole?

Yeah, I mean it’s not a concept record by any means, but it is, I suppose, loosely conceptual and it does sort of take place in this fictitious city. And I think there is a sort of dystopian feel to it all, which I suppose rang true pre-pandemic, but also even more so during the pandemic. But there definitely are universal themes running throughout.

Can you offer any update as to when it might come out?

Yeah, I’m not gonna put my foot in it and give a date, but very soon, like really soon. Like, if not next month, the month after.

Yeah, soon. I think everything just worked out for us to sort of – it got to a point where it was now or ever, really.

It’s perfect timing as well, considering you’ve just celebrated the 10th anniversary of your debut. I wanted to take a moment to talk about that, because obviously it’s of great significance to you and the band, but also so many people, including myself, grew up with that record. Has revisiting those memories and seeing fans engaging with it on social media made you reflect back on the album and that time any differently?

When it was all happening for us, it was obviously incredibly exciting, but it was also an incredibly anxious time for me and I felt very insecure. I don’t think any of us really felt quite ready for the spotlight it shone on us. And so then I started questioning myself and I was questioning the band and it’s taken me a long time to really come to terms with it and to fall back in love with it. And looking back now and thinking what it did for us as individuals, how it changed our lives but also seeing all the amazing messages and seeing what it meant to so many people – it’s just made me so proud of that, and it’s nice to see that it was as important to other people as it was to us.

Before we end things off, I know you have a sort of fascination with artists that become cultural phenomena. Are there any new names that you’re currently really excited about?

I really like Holly Humberstone, from the second I heard her I thought that she could be – if you want a prediction as much as my approval, I think she’s great and I think big things await. There’s a girl I think is amazing called Lucy Blue who only just released her first song last month, but she’s awesome too. I’m trying to think – I mean, there’s always endless exciting new artists. I also make a playlist on our Spotify called ZODIAX, where every month I update it with my favorite 12 new songs, so you can check that out as well.

The Vaccines’ Cosy Karaoke EP is out now. The limited edition 10th anniversary reissue of What Did You Expect From The Vaccines? arrives on April 2. In collaboration with Jägermeister Musik, The Vaccines are hosting a competition where fans can win their own record player by creating a DIY one themselves – find more info here.