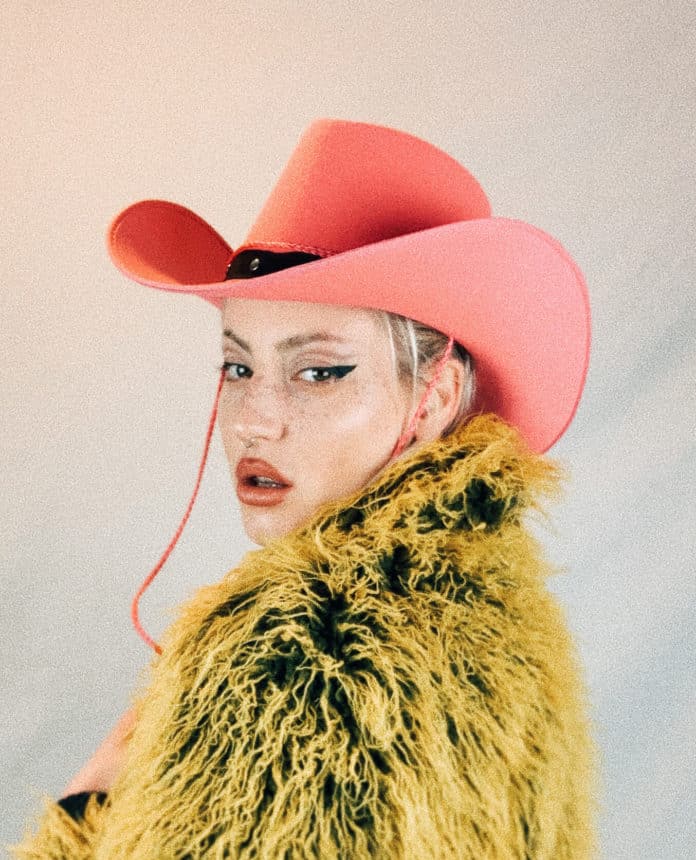 After releasing music under her birth name with her band The Hooves of Destiny, including 2012’s much-praised album Yours Truly, Cellophane Nose, Beth Jeans Houghton hit a creative block. Having taken the time to regroup and reassess, she came out the other side and began to create again, this time as Du Blonde. Her debut LP under the new moniker, 2015’s Welcome Back to Milk  – the title of which was inspired by a bout of constipation and using her lactose intolerance as a bowel loosener – introduced the world to the snarling, raw and cathartic sound that encapsulates Du Blonde. From there, Beth went on to release a comic book series, directed music videos for Ezra Furman, LUMP, and the Red Hot Chilli Peppers, and took on production duties for her sophomore outing, Lung Bread For Daddy, an achingly honest collection of songs that explored her ongoing battles with mental health.

Lead by the singles ‘I’m Glad That We Broke Up’ featuring Ezra Furman, ‘Medicated’ with Shirley Manson, and ‘Pull The Plug’, Du Blonde’s latest album, Homecoming, is her first on own, newly founded label Daemon T.V. It’s fitting then, that it sounds like the truest reflection of herself so far, one that stems purely from a love of music and a need to create. She faces her demons on ‘Pull The Plug’, shows us a more reflective side on ‘Ducky Duffy’, and establishes her distinct way of telling an ugly story beautifully on the Andy Bell-assisted ‘All The Way’. At the helm, as always, is Beth’s commanding voice, orchestrating the magnificent cacophony she’s created from top to bottom.

We caught up with Beth Jeans Houghton for the latest edition of our Artist Spotlight Q&A series to talk about past collaborations, her creative process, Homecoming, and more.

The important question, now more than ever; how are you doing, really? What’s been the biggest thing keeping you afloat in these incredibly trying times?

Considering the year we’ve all had I’m doing alright thank you! I’m lucky that the work I do I can mostly do from home. The biggest thing keeping me afloat is my mum. I came to stay with her at the beginning of the pandemic and I’ve been here on and off  AR for a year. She’s been there for cuddles and also to give me a hand with things like packing up the records to post out. I’m self releasing so I’ve turned her house into a warehouse full of LPs and CDs and she’s been very gracious.

You’ve collaborated with some incredible people on the album including Shirley Manson on the track ‘Medicated’ and Ezra Furman on ‘I’m Glad That We Broke Up’. What was the most rewarding part of those experiences?

Really, I think it was just having experiences with friends again. Everybody recorded their parts either from home or their own studios and sent me the tracks via email. Having that kind of experience with people outside of my tiny quarantine bubble was really uplifting. I’d check in with Jorgen Jorgensen-Briggs (of Ezra Furman and The Visions) who did some bass parts on the record and he was out in the Mojave desert the whole time. It was a nice reminder that there’s a whole world beyond the house I was making the album in and that you don’t always have to be in the same room as someone to share an experience. I’m stoked to have these amazing people on my record, I’m super grateful, but first and foremost they’re my friends and that’s what made the whole thing so fun.

Over the years you’ve had an impressive creative output. You’ve released a comic book series Butt Hurt, a collection of illustrations done by yourself, you’ve painted (notably your album cover for Lung Bread For Daddy) as well as of course releasing music as Beth Jeans Houghton and Du Blonde. Is creativity something you’ve always harboured, has the arts always been your outlet and way of expressing yourself?

I think it’s probably the only thing I was ever going to do. I’m not academic, I struggle a lot with things outside the creative field and creativity just came very easy for me. I’m sure having a mother who taught me how to use Photoshop instead of video games helped, but it’s always been the easiest way for me to express myself. I’ve always leaned towards using different mediums and part of my wanting to ditch the record label route was because I wanted more time and freedom to make all these different things. Releasing records on record labels can end up being a very convoluted and complicated journey to get to the point of actually putting an album out. I wanted to work with people who’d be like ‘wham, here’s the album let’s release it in 6 months’ and then I can work on painting or something for a couple of weeks. Luckily I’ve found that and I’m really grateful.

Homecoming is your third release as Du Blonde. What’s the biggest marked difference between your initial release as Beth Jeans Houghton and this album in your opinion?

The biggest difference is that Homecoming is self released. This is the first album I’ve released without label backing and so the entire journey has been different from start to finish. I wrote, recorded, engineered and produced the album at home, which is something I’ve always wanted to do. I’m also an entirely different person now. I wrote most of my first album when I was 16 years old, I’m now 31. I love my first album, I’m still proud of what I made back then at that age and under those circumstances, but I hadn’t yet figured out how to write a straight up rock song. I had access for the first time to a studio and all sorts of instruments, and so I was like ‘let’s see what I can make when I can do anything I like’, and I love how it came out, but playing shows to an audience who are sitting down and nodding isn’t how I saw my life playing out. I always wanted to play raucous shows in basements where people can feel some kind of release, and I feel like three Du Blonde records in, I can play a show and feel like I’m finally in the right place.

The album has a beautiful cadence, there’s a real sense of control and nuanced pacing. It’s almost a hybrid of Lung Bread for Daddy and Welcome Back to Milk. Did you have a clear vision of what you wanted it to sound like before you started recording?

I did but it wasn’t how it turned out! At the beginning it was gonna be a stripped back shitty garage record, like very simple songs with very little songwriting. A lot of the records I listen to while I’m working are a bunch of good songs that don’t have a lot to them, that’s what I enjoy most of the time. So for me this record was going to be the least song-written, simplest record of overdriven ditties, which is how I sold the thing to Sam Grant (Pigsx7) who mixed the thing. I feel bad that by the time I turned up to mix I was like ‘here’s a couple of garage tracks but then also some epic ostentatious guitar solos with strings and a 30 person choir’. He was a good sport though and turned my mediocre engineering skills into something that sounds a lot more polished than it really was.

Perhaps a personal one, but how do you feel when you perform/write/create as Du Blonde? Listening to your music is empowering and cathartic, it’s raw and in your face with honesty. I wondered if that is somewhat how you feel when you’re in the process of writing?

I feel like I’m my ultimate form. I’m not a social person in the slightest. I barely leave my house, sometimes I’ll go to the pub with friends but mostly I like to be alone in my room making stuff. So in a way performing and touring is the opposite of my personality. Standing up in front of a crowd and opening myself up to a lot of opinions is quite anxiety-inducing, but when I’m out there as Du Blonde I feel better equipped to deal with those kinds of things. I feel like I created Du Blonde as this ideal of who I’d like to be in the future, someone with a lot of bravado who doesn’t get embarrassed and can defend themself, and I’m moving closer and closer to actually filling that space. It’s helped me in my writing as well. There are probably a bunch of songs I wished I could write in terms of honesty, but wouldn’t have felt so comfortable doing so 10 years ago. But having a character who is basically a braver version of myself has allowed me to open up much more about mental health and abuse in my songwriting. That isn’t always the subject matter but for me being able to touch on that has helped me deal with a lot of things that have happened in my life.

You’ve always been extremely honest and transparent about your struggles with your mental health and this is something you’ve explored musically. Is making music intrinsically tied up with catharsis and does it provide an emotional outlet for you?

It does. I (like most people) have a lot of thoughts and feelings swimming around in my brain and the way I make sense of those is to put them into a song, take a step back and look at them from a new perspective. Sometimes I’ll write a song of nonsense and then 6 months later listen back and realise I was actually saying something important about a situation or a relationship I hadn’t managed to navigate yet. It’s kind of like having a diary but instead of words it’s songs and paintings and a video game. I have all these things I can look back on and see how I’ve progressed or regressed. I have two self portraits I painted for no particular reason, but if you place them together you can see clearly who I was before I took medication for depression and anxiety (in this painting I’m screaming with strings of spittle flying out my mouth) and after (post-medication I’m laying serenely in some clouds happy and kind of stoned). I hadn’t thought anything of them but I was moving things around my garage one day and suddenly they were next to each other and it was so clear how far I’d come with my mental health. So I’m glad I have things like that even if they’re painful to look back on.

Du Blonde’s Homecoming is out April 2 via Daemon T.V.