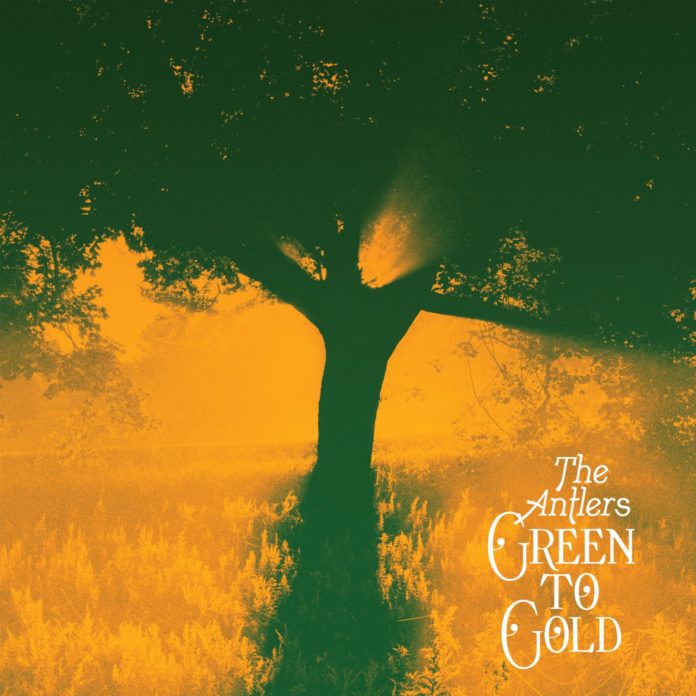 You’d have to read a bit too much into the lyrics on Green to Gold to see them as a metaphor for the Antlers’ long-awaited return, but a couplet on ‘Wheels Roll Home’, the first non-instrumental track on the album, fittingly sums up the expectations that complicate such a comeback: “Every second we got, we gotta make believe/ That you’ll be right back like you never left.” The group’s first album in seven years is tinted in the same hushed, muted tones that have permeated much of their discography, but their artistic growth seems less a result of strained deliberation than a genuine reflection of the changes that have occurred in their personal lives. In the wake of the tour cycle for 2014’s Familiars, primary singer-songwriter Peter Silberman was forced to set music aside after his aural health had suffered a severe blow, causing him to relocate from the city to the more serene environment of upstate New York, where he grew up. But he then endured another setback after touring Impermanence, the 2017 solo album that quietly mirrored his struggles with hearing loss, this time diagnosed with lesions on one of his vocal cords.

It would be understandable if Silberman decided to take a break from music entirely, or dedicate his career to making spare, instrumental solo music. He took up gardening and hiking, fostering a sense of home that came both from leading a more peaceful existence as well as the safety of a fulfilling relationship. As evidenced on Green to Gold, the music came naturally, like the small miracles that illuminate its warm palette – field recordings of crickets and chirping cicadas that displace the Antlers’ music from the claustrophobic environment of hospitals and bedrooms to a more open and organic space. Imbued with an air of lightness and touches of country-tinged Americana, the album aptly fulfils Silberman’s intention to make “Sunday morning music,” but at its brightest also transcends that somewhat characterless description. Highlight ‘Just One Sec’ draws from the instructions of a meditation retreat Silberman attended with longtime drummer Michael Lerner, pleading, “Free me from your limiting ideas of me/ Free me from the version you prefer I’d be.”

It’s hard not to hear that liberated sense of self reflected in the duo’s songwriting as well as Silberman’s vocals, which never strain to achieve their desire effect. His disquieting falsetto, once responsible for some of indie’s most devastating emotional moments, has been eased out but not erased; his voice has lost none of its distinct resonance, punctuating atmospheres of intimate beauty that stem from the simple pleasures of day-to-day life. The songs don’t so much ignore interpersonal drama as filter it through a wider, more amicable lens, zooming out to lighten its weight, the way time often does. The album opens with the lines, “There’s a point, way out, past the present tense/ Where our weeks away make a lot less sense,” while ‘Solstice’ finds the narrator “winding back down the decade past/ Through the afternoons when I knew you last,” recalling how “we were walkin’ true like the stars don’t hurt.”

Silverman has cited David Lynch’s The Straight Story, a lesser-known but positively received road drama the director made for Disney, as a reference point for the album, calling it “heartfelt” and “melancholic.” The comparison makes sense, except that the melancholy one might have traced up until 2014’s Familiars is largely absent here, or at least softened out as if by a smooth breeze. While some might yearn for more of the trademark intensity or emotional peaks of Hospice, part of Green to Gold’s success lies in the fact that the group have matured their sound without abandoning the qualities that made them striking in the first place; in fact, it was going on a tenth-anniversary tour of the album that partly drove the decision to revive the project. You can hear echoes of the past on ‘Volunteer’, but Silberman seems more enraptured by the possibilities of the future: “It’s challenging, practicing living like beginners,” he admits. Then, as if slowly watching something unravel, he adds with a sense of wonder, “But it’s happening, it’s dazzling.”

Album Review: The Antlers, 'Green to Gold'You’d have to read a bit too much into the lyrics on Green to Gold to see them as a metaphor for the Antlers’ long-awaited return, but a couplet on ‘Wheels Roll Home’, the first non-instrumental track on the album, fittingly sums up the...