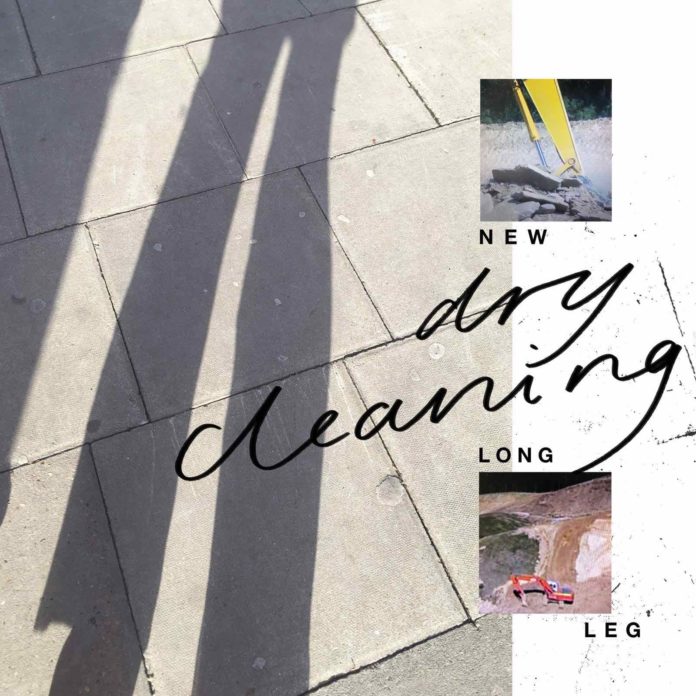 “Everyone’s kind of experiencing their own little version of the world in a solitary way,” Florence Shaw once told me. “By collecting lots of little things, I think what I’m trying to do is to make an external version of what I am experiencing walking around to share with other people.” Despite the Dry Cleaning frontwoman’s attempts to reflect the world around her, it would be foolish to assume that this reflection would be mirror-perfect. I’m drawn to a photo on the album insert of New Long Leg, featuring a window covered completely in tinfoil. The foil obscures the outside world and reflects the inner—fragmented and distorted by crinkly aluminium—back at you. I think this more closely captures the way that Shaw is “reflecting” her own little world. Built out of inner monologues, snippets of conversations, and bizarre asides, Dry Cleaning’s debut album is a modge-podge collage of souvenirs from Shaw’s travels: An entirely new and incomplete picture.

Already known for their non-sequitur lyricism, Dry Cleaning’s songs have become even more impenetrable since 2019’s Sweet Princess and Boundary Road Snacks and Drinks EPs. Shaw has a penchant for changing direction in the middle of a thought, switching between different characters or moving from external to internal conversations at a whim. New Long Leg is peppered with a number of throwaway lines—like “Simple pimple,” “Mystical Shakespeare shoes,” and “kung fu cancel”—that are mined more for their phonaesthetic quality rather than any real meaning or narrative importance. But New Long Leg never feels inane, just like Dry Cleaning has taken our world and upped the weird factor.

Dry Cleaning take an obviously playful approach to songcraft: a nagging thought about eating a hot dog, a judgy comment about a dentist’s landscaping, and an asinine conversation about The Antique Roadshow are delivered in Shaw’s characteristic monotone and set against comically serious instrumentals courtesy of bassist Lewis Maynard, drummer Nick Buxton, and guitarist Tom Dowse. But part of the beauty of New Long Leg is that while it may juxtapose little details in new ways, it isn’t revealing anything that wasn’t already there. Life is already pretty absurd; Dry Cleaning’s real strength is their ability to drop us into disorientingly similar but surreal versions of our own world, where everyday life isn’t mundane but full of little stories waiting to be uncovered.

Shaw dramatizes everyday life to the point that every little detail and conversation becomes of the highest importance for New Long Leg’s narrators. These seemingly random fixings give the listener insight into the narrators’ state of mind: from what is weighing on them to their secret desires. On ‘Leafy’, we know that the narrator’s break up is constantly lingering in the back of her mind because everything reminds her of her ex, to the point where even thinking about taking pills leads her to wonder “Maybe I just need someone.” Or on ‘Strong Feelings’, where we get some insight into the intense nature of the narrator’s unrequited love by a number of delightfully weird and too honest confessions like “I’ve been thinking of eating that hot dog for hours” and “My only ambition in life is to grip the roots of your hair.”

There’s an art to what weird fixings Shaw populates her songs with. Her invocation of specific artworks or songs (she fits references to ‘The Girl from Ipanema’, Hans Holbein the Younger’s The Ambassadors, and a flower-holder by John Bowen in ‘Strong Feelings’ alone) is a personal touch amid a sea of ambiguities. These artifacts must have meant something to her, and now she offers them up to the listener to interpret—like sending a loved one your favorite book or song in the hopes that it will provoke a similarly strong reaction. New Long Leg isn’t pretentious, preachy, or overly serious like other offerings from the recent resurgence of the post-punk genre; it’s accessible precisely because it isn’t really trying to say anything specific. There’s a degree of trust here in the listener as interpreter that becomes especially important as the album slips into more abstract territory.

The second half of New Long Leg is remarkably trippier, as Shaw abandons any attempts at narrative story-telling and indulges in something more akin to stream-of-consciousness. ‘More Big Birds’ is literally about being lost in thought, the narrator humming and hawing about something on the tip of her tongue—“What d’you call it / It’ll come to me.” It sets the tone for New Long Leg’s final and most challenging track, ‘Every Day Carry,’ which sees the band experiment with a more expansive and spacious sound. Clocking in at over 7 minutes, the guitars jitter, skip, and whirl around in the distance as Shaw rambles out clipped thoughts about chocolate chip cookies, smear tests, and a big pearl. For nearly a quarter of the song Shaw disappears entirely, giving way to a relay of repetitive and discordant droning, before she picks back up the mic to ponder, “Now it seems like none of that meant anything.” It feels meta in a way, a tacit acceptance that the songs on New Long Leg aren’t meant to cohere into some overarching meaning, instead leaving themselves up for interpretation. If there is an underlying message to the strange world that Dry Cleaning have created, it’s that real life is as resistant to definition as New Long Leg. It’s up to us to sort through Shaw’s junkyard of modern ephemera and try and find the treasure in it, to see what sticks with us, why, and what that might mean; even if it all ends up meaning nothing at all.

Album Review: Dry Cleaning, 'New Long Leg'“Everyone’s kind of experiencing their own little version of the world in a solitary way,” Florence Shaw once told me. “By collecting lots of little things, I think what I’m trying to do is to make an external version of what I am experiencing...