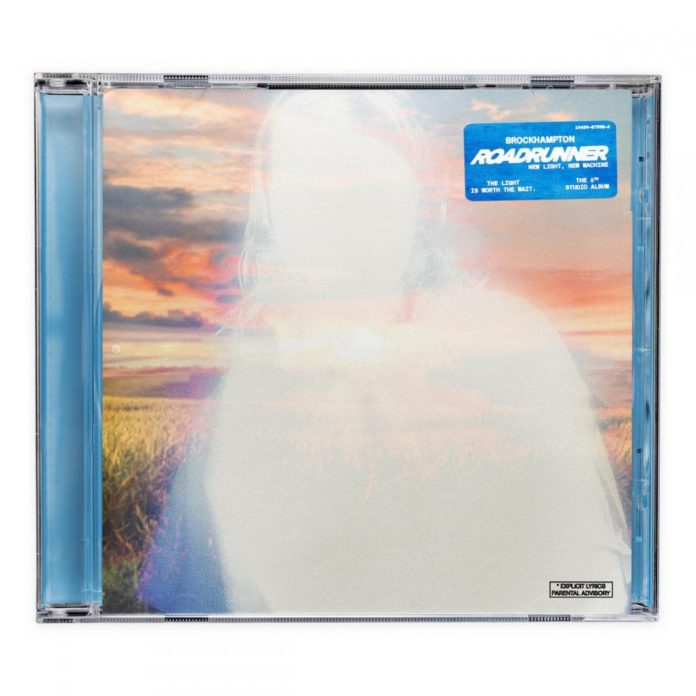 There’s something unsettling about the cover art for BROCKHAMPTON’s ROADRUNNER: NEW LIGHT, NEW ROAD: not the image, itself more abstract and impressionistic than their previous releases, but the way it’s framed as a reminder that – even in the age of streaming, and regardless of the group’s intentions – this is ultimately a product meant for consumption. The Texas crew have grappled with the trappings of success in the past, expressing dissatisfaction and stress over their deal with RCA, and here that context serves as a stark backdrop to their intensely personal confessions. In the lead-up to the release of the album, frontman Kevin Abstract said this is the first BROCKHAMPTON record where he felt “tired of the boyband thing,” explaining that they’d set out to redefine the term and now “just want to make music and let people call it whatever they want.” When asked what he would call the group now, he avoided commercial terms entirely: “A community. Friends. Homies.”

Musically, BROCKHAMPTON have never been one thing. One might be able to chart a clear artistic progression from the SATURATION trilogy to 2019’s GINGER, but the group’s success lies in their ability to lean into the different corners of their sound without diluting it, creating a space where infectious energy and emotional vulnerability can coexist semi-harmoniously. One of the most endearing things about their latest record is that they seem both happy to accommodate and oblivious to outside expectations, keen to embrace the messy contradictions that have always defined their music with a newfound confidence and sharper focus. “False dreams stripped by silence/ Deals they had us sign, for years it had me blind/ Think I had to hit rewind and think about why I do shine,” Abstract raps on the lead single and opener ‘BUZZCUT’; he we might be missing from that final line, but the group as a whole have evidently put quite a bit of thought into ROADRUNNER.

Though a certain level of disjointedness that has characterized their past couple of releases is still present here, the album plays to the group’s strengths while exploring new territory. For one thing, there’s more notable guest spots – Danny Brown delivers a typically frenetic performance on ‘BUZZCUT’, while JPEGMAFIA’s verse on ‘CHAIN ON’ manages to rhyme Duolingo with previous collaborator Dua Lipa; the rest of the features, unfortunately, are less memorable. A more significant shift is the greater use of live instrumentation underpinned by touches of psychedelia, as on the melodic, despondent ‘WHAT’S THE OCCASION’, which closes out with an epic guitar solo. The album’s weakest cuts lack that sort of weight, with ‘COUNT ON ME’ and ‘I’LL TAKE YOU ON’ relying on safe R&B and pop formulas that tend to slip into the background.

ROADRUNNER’s tight production means that one could enjoy the album on a purely surface level, taking in even its most striking moments – like the guitar-driven instrumental on ‘THE LIGHT’ or the G-funk-inspired ‘DON’T SHOOT UP THE PARTY’ – while ignoring their dark subject matter (suicide, gun violence). But both Abstract and Joba’s work throughout the album and especially on ‘THE LIGHT’ is nothing short of outstanding, their lyrics as painfully revealing as their delivery is resonant: Joba reckons with his father’s death and the implications it’s had for not only his mental health but also his self-perception, while Abstract delves into sexuality, religion, and his complicated relationship with his own mother.

Yet for an album that largely revolves around family, it’s disappointing to see BROCKHAMPTON failing to reflect on their own unity as a collective, especially considering their obvious chemistry on record. The LP does offer hope in its final moments of introspection as Abstract and Joba return on ‘THE LIGHT PT. II’, but we’re left with a nagging sense that the group have more to say before each member follows their own individual paths. ROADRUNNER is billed as BROCKHAMPTON’s penultimate record, with another one arriving later this year, which feels somewhat fitting even if it ends up not being true: There’s enough spark here that makes it worth the wait, but the album still acts mostly as a promise. You’re left wondering what the light is really like, or if it will ever come.