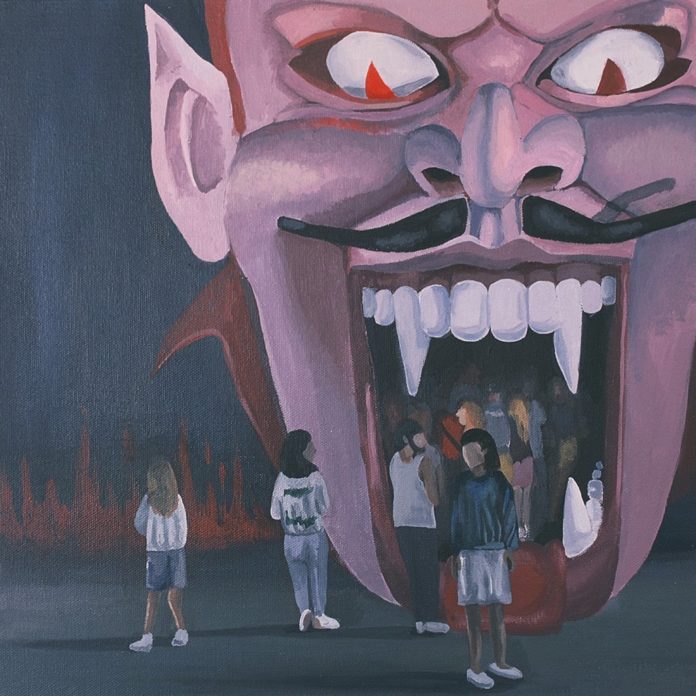 A feeling of vertigo creeps in as soon as you press play on Spirit of the Beehive’s new record. But like everything else about the Philadelphia band’s music, that feeling soon begins to mutate, veering off in countless different directions that are impossible to keep track of but are mirrored, as if through fractured glass, in the album’s cryptic lyrics: “a fantasy, a sedative,” “filled with smoke, seamless dread;” “compressed in a vacuum;” “it permeates/ beyond the scope of vision.” In contrast to their last album, 2018’s Hypnic Jerks, each track on ENTERTAINMENT, DEATH is stylized in all-caps, but their sound is too fragmented, too lethargic to be called maximalist. Through a freakish mix of gauzy synth textures, off-kilter percussion, and processed vocals, they elicit the kind of horror that’s too vague to recall and too pervasive to escape, like letting unfiltered thoughts course through your mind as your body descends into an abyss. Then you wake up, stare feverishly into the sun, and question everything: “Do you realize you’re caught in a web?”

None of this is exactly new for the psych-rock trio – whether you’ve heard the band’s previous albums or not, ENTERTAINMENT, DEATH has the eerie quality of a recurring dream you can’t paint a full picture of no matter how many times you’ve come across it. If Hypnic Jerks gave the impression of an eccentric band approaching a more conventional indie sound, their latest shatters the illusion of any kind of linear journey even as it clearly showcases their ambitious vision at its most fully realized. For a group whose music has always existed in a kind of liminal space, ENTERTAINMENT, DEATH manages to be both strangely cohesive and frighteningly chaotic; elusive in concept yet playful in spirit and visceral in its impact.

And like any dream, there are some images you just can’t shake off: A voice sample from a commercial declares ‘THERE’S NOTHING YOU CAN’T DO’ before an electro-psych groove devolves into grunge-fuelled abrasion, Zach Schwartz’s screams not so much cutting through the noise as much as helplessly blending into it. It’s a moment of disorienting brilliance in an album that has plenty but generally avoids presenting them in such an immediate fashion; melodies emerge, only to collapse under a vapor cloud, shifting course entirely. Permeating it is a sense of listlessness and panic that feels like submitting yourself to an unknowable force – ‘THE SERVER IS IMMERSED’ sounds almost mellow and relaxed, but the lyrics tell a different story: “Dread desires the weak/ And it’s all red sea above me.”

Spirit of the Beehive aren’t the kind of band that tends to adhere to songwriting conventions, but it’s impressive how they manage to fit their ever-evolving arrangements into songs that rarely cross the 3-minute mark. ‘I SUCK THE DEVIL’S COCK’ would stand out in the tracklist simply for its obscene title and 6:40 runtime, but it also serves as a microcosm of their sound as a whole, split in four movements that vacillate between propulsive post-punk and pure dissonance – yet the overall effect, like that of the album, is ultimately beautiful.

I’ve listened to ENTERTAINMENT, DEATH nearly a dozen times, and yet almost everything about it remains entirely out of my grasp – not just because much of it is surreal and deliberately nonsensical, but also because it refuses to register in the part of my brain responsible for processing music. Its uniqueness seems to go beyond stylistic innovation or merely atmosphere: It’s the rare album that doesn’t just evoke a dream state but seems to operate on that subconscious level, drawing you back to discover its endless possibilities, as unnerving and unreachable as they might be.

Album Review: Spirit of the Beehive, 'ENTERTAINMENT, DEATH'A feeling of vertigo creeps in as soon as you press play on Spirit of the Beehive’s new record. But like everything else about the Philadelphia band’s music, that feeling soon begins to mutate, veering off in countless different directions that are impossible to...