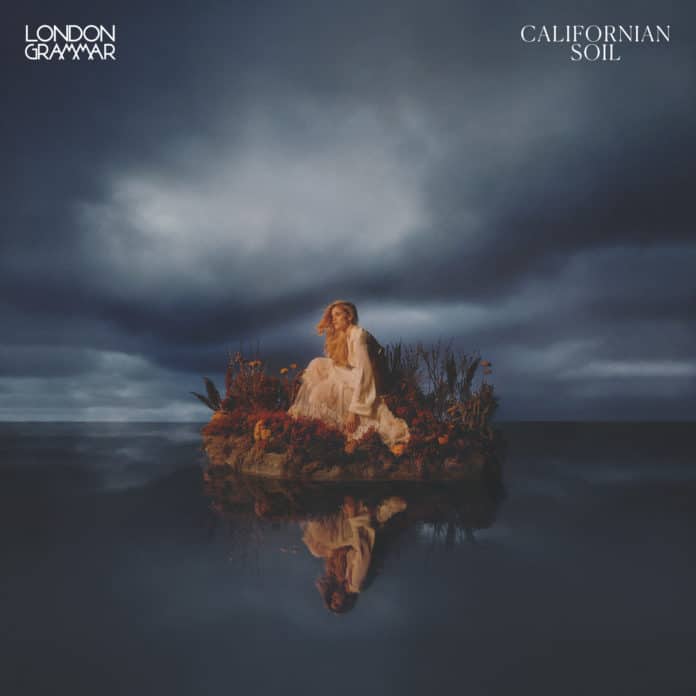 When London Grammar first arrived onto a heavily saturated music scene almost a decade ago, their emotive brand of pop balladry drew comparisons to indie favorites like the xx and Florence and the Machine as much as it caught the attention of mainstream audiences. Marked by Hannah Reid’s dynamic vocal range, the British trio stood out from their contemporaries – and eventually their imitators – thanks not only to the accelerated nature of hype (they were frontrunners for the coveted Mercury Prize before their 2013 debut, If You Wait, had even come out), but because their music displayed a unique earnestness and restraint. With their sophomore album, 2017’s Truth Is a Beautiful Thing, they retained their focus on making tastefully elegant pop music, though this time the increased grandiosity of the production left it feeling occasionally hollow and lifeless. Their third full-length effort, Californian Soil, sees them slightly tweaking their sound to hint at the scope of their musical ambitions, but the results are once again mixed.

London Grammar reveal their willingness to explore new territory as early as on the album’s title track, which follows the string-led ‘Intro’; there’s a heft to the instrumental here that much of the album sorely lacks, even if the obvious nod to Massive Attack’s ‘Teardrop’ isn’t backed by the right amount of dramatic tension. But as a whole, Californian Soil suffers from the opposite problem: It’s clear that Reid’s powerful voice has lost none of its resonance, but it can’t always make up for the gaps left by weak songwriting and bland production. ‘Missing’ features one of her most layered performances, though what exactly she’s singing about remains ambiguous. That emotional vagueness defines much of the record: Reid opens ‘How Does It Feel’ with the line “Pure emotion/ Let it burn,” but as the track develops into a flavorless attempt at disco revivalism, you’re left wondering, how does it feel? With a title that harkens back to the group’s breakthrough Disclosure collaboration ‘Help Me Lose My Mind’, ‘Lose Your Head’ has a similarly catchy hook but falls short of making their tepid formula feel fresh.

There are instances where Reid’s ability to tap into a particular emotional state elevates the often nondescript nature of the lyrics. ‘Lord It’s a Feeling’ stands out as an evocative ballad dealing with infidelity, displaying a boldness that’s rare coming from a distinctly middle-class pop group like London Grammar: “I saw the way you laughed behind her back/ When you fucked somebody else,” Reid sings at the end of the first verse, lighting a match before delivering the song’s scorching chorus. While the writing would still benefit from a bit more depth and nuance, the song aims to elicit a deep-rooted sense of empathy rather than painting a detailed picture, and the forceful percussion helps build the atmosphere around it.

Elsewhere, Californian Soil serves as further proof of the trio’s knack for making n otherwise run-of-the-mill piece of mid-tempo electronica feel like their own. Though Reid has expressed uncertainty about ‘Call Your Friends’ (“I’m not sure if we ever got that song quite right,” she says), its stirring vulnerability and memorable melodies render it a clear highlight in the tracklist. Meanwhile, songs like the George FitzGerald-produced ‘Baby It’s You’ demonstrate that the band is more than capable of integrating a more upbeat sound into their usual stylings, trading melancholy for an exuberance that feels wholly genuine amidst a flurry of shimmering synths.

The album’s sonic uniformity can have the effect of holding back some of its more interesting explorations of femininity and the music industry at large, but the group’s efforts to present a stronger thematic throughline aren’t entirely lost. The closing track, ‘America’, goes to a place their music hardly ever has before, tying their own musical journey to the false ideals of a nation they’re not even from: “All of our time chasing a dream/ A dream that meant nothing to me,” Reid sings. There’s an honesty there that contradicts any suspicion that London Grammar are only interested in playing it safe at this point in their career; the deeper they go with each attempt at fleshing out their sound, the louder their music will resonate.

Album Review: London Grammar, 'Californian Soil'When London Grammar first arrived onto a heavily saturated music scene almost a decade ago, their emotive brand of pop balladry drew comparisons to indie favorites like the xx and Florence and the Machine as much as it caught the attention of mainstream audiences....