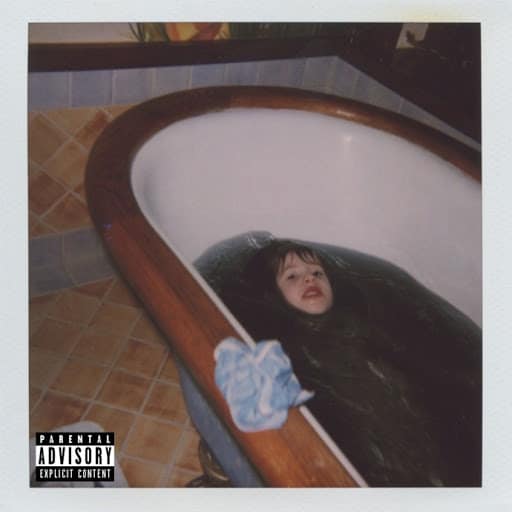 In our current moment, the music that rises to the top of culture’s echelons is that which finds enough inspiration from other genres to become more than the sum of its parts. This is certainly what American singer, songwriter, and producer Ade has attempted on his debut album, Midnight Pizza. The 10 tracks move swiftly from style to style, rarely settling in one place before urgently moving onto a fresh set of ideas.

What the album boasts in imagination, however, it lacks in cohesive arrangement. Ade’s broad sweeps of heartfelt songwriting incite feelings of pure euphoria at points, but when listened to as a collective whole, Midnight Pizza suffers from emotional whiplash. Sending its listener from the lowest rung to the highest peak, often in the same song, one can’t help but wonder whether the album could have benefitted from a policy of less is more.

Album opener, ‘The City’, is a sumptuous collection of moody synths, brought to life by Ade’s pained reverb-soaked delivery. Moving seamlessly from chord to chord, ‘The City’ paints an epic picture of cinematic scale that stands up as a bold yet unconventional opening track, thanks to the way Ade injects a strange air of finality to the piece.

Indeed, the rest of Midnight Pizza follows in much the same thematic style. Each song is executed with a clear sonic vision in mind, resulting in an emotional landscape that is vast and personal in isolation. But when considered in the wider context of the album, there is a somewhat disjointed feel. There are, however, moments of consistently bright adventurism from Ade. The ironically anti-club club track, ‘Another Weekend’, is infectious right from the start, falling somewhere between Darwin Deez and Disclosure. ‘Feel A Thing’ provides a mysterious yet frenetic dimension to the album, brimming with claustrophobic breaks and chest-bursting synths. Meanwhile, ‘Happy Birthday’ is a gorgeous shot of nostalgia, sensitively arranged and intuitively produced to ignite feelings of intense warmth.

The clear peak of the album, though, comes in the second to last song. ‘Moving Slow’ is a warm and endearing cut, with the moving arrangement of strings and keys playing the perfect host to Ade’s witty lyricism. “Scatterbrain/ Will you ever calibrate?” he asks in the opening line, neatly combining images of the analogue and the digital to create an effect both pleasing and contradictory. It’s here that the fruits of Ade’s labours bear their greatest reward; the pureness of his sensitive songwriting is striking throughout, but with just enough well-chosen lyrics, he builds a tension that draws our ears further in.

For all the inventive songwriting here, Midnight Pizza ends on a somewhat tentative and unsure note. The eponymous track is a slow-moving 80s-style ballad to messy nights out, but rather than grand and gothic, it plays out as somewhat necessary and constituent. A continually shapeshifting record, Ade’s debut is hard to pin down. Somewhere within the ven diagram of pop, indie, and dance is perhaps its most natural home, but come the end of the LP, you wish that his concoctions were a little simpler.

Album Review: Ade, 'Midnight Pizza'In our current moment, the music that rises to the top of culture’s echelons is that which finds enough inspiration from other genres to become more than the sum of its parts. This is certainly what American singer, songwriter, and producer Ade has attempted on...