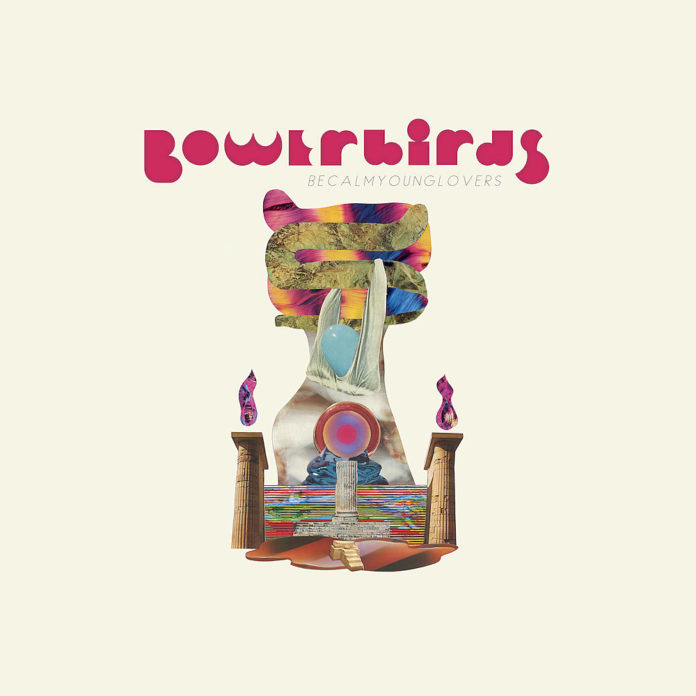 One of the most pleasant indie folk bands of the early noughties, the couple at the heart of Bowerbirds seem to have had a picturesque life: Philip Moore and Beth Tacular made and released their simple but sweet records, living in an isolated cabin in the US that they built themselves. Life rarely cares for such sweet narratives, though. After a long absence of nine years, Bowerbirds returns but without Tacular, the couple having split just after their last album, 2012’s The Clearing.

The band’s new album becalmyounglovers is, then, the sound of healing and transformation, written and processed over six years; Moore is back, bereft but not beaten. Perhaps it was a conscious act to maintain a resolute buoyancy to much of the instrumentation, as on the Kurt Vile-esque opener ‘SBSF’. Time hasn’t impacted Moore’s knowledge of lo-fi folk either: Richly warm acoustic strumming fills ‘Pennies’ and the despondent ‘Sweet Dissonance’.

Sometimes you wish that Moore would relinquish the rhythmic pleasantries, though. Only a couple of times does he let himself truly go, on the rough and ready ‘The Rules’, pressed with a dirty guitar line, and on ‘Seems Impossible’, where he delivers his words with sharper confidence. It’s why a track like the limp ‘Treasure’, when it arrives over 25 minutes into the record, feels too slight, unnecessary.

Moore’s voice is unremarkable and he does what he can with it. It’s why it’s welcome when gentle and sweet harmonies filter through tracks like ‘SBSF’ and ‘Pennies’: it’s tempting but futile to imagine the female voice as Tacular, reuniting to delve into just what happened to cause the disintegration of their relationship; sometimes a reckoning with the past can be a lonely endeavour.

We can feel the insularity in Moore after the breakup. The lyrics betray him watching the world pass him by in his isolation. The time of day changes with his emotions, from twilight to day and back; he notes the fire, wind and frequently the moon as nature engulfs him, perhaps purposefully. When his songwriting focuses on the personal, however, the effect is heartbreaking. “Seems love is not the pinnacle anymore/ Just an obstacle to avoid,” he achingly considers on ‘Can U Beleeb’; “Even when the fog from the fighting lifts/ I’ll be yours to blame,” he decries on ‘Moon Phase’, capturing that worrisome feeling that most who have fallen out of love will recognise. But Moore saves his biggest question for the final track, asking “Is this every life?” Will our pain and heartbreak carry into any beyond? Sometimes the totality of the dissolution of love feels like it will.

One suspects that becalmyounglovers would have been a much different listen had it come sooner after the end of Moore and Tacular’s relationship; not many breakup albums wait as long as nine years to materialise. Perhaps that’s what saves it from being overly sentimental or self-pitying, although Moore is probably too accomplished a songwriter for that to have ever happened. As it is, Bowerbirds have returned with enough to mean that such a huge loss should only be felt in the band’s past and not in its future.

Album Review: Bowerbirds, 'becalmyounglovers'One of the most pleasant indie folk bands of the early noughties, the couple at the heart of Bowerbirds seem to have had a picturesque life: Philip Moore and Beth Tacular made and released their simple but sweet records, living in an isolated cabin...