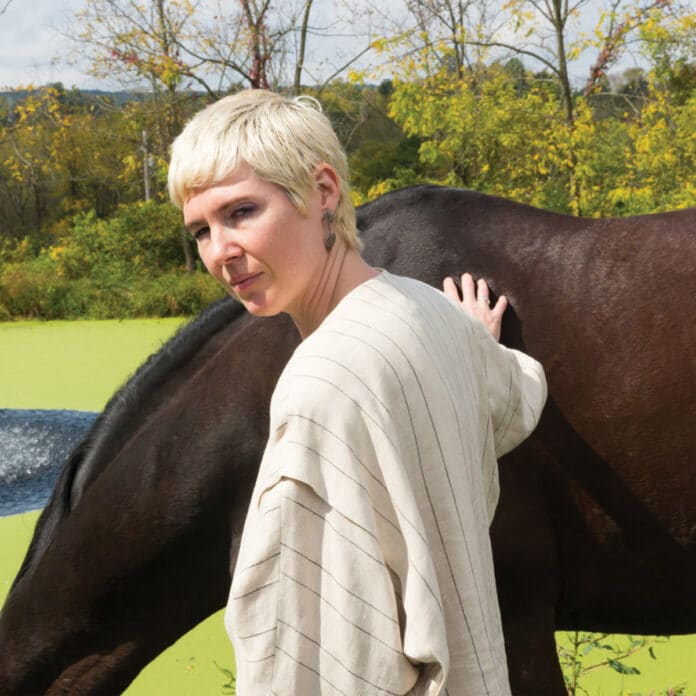 The title for Philadelphia/Michigan musician Rosali’s third album, No Medium, is taken from the Charlotte Brontë novel Jane Eyre. The full quote from that is helpful in evoking the tension that controls Rosali’s record: “I know no medium: I never in my life have known any medium in my dealings with positive, hard characters, antagonistic to my own, between absolute submission and determined revolt. I have always faithfully observed the one, up to the very moment of bursting, sometimes with volcanic vehemence, into the other.”

In the album, the tension comes from Rosali, ironically, being in a contested middle. She wishes to fully let go of a lost love, to move on, but in the songs she deliberates a little longer. She fondly recalls the good times of the relationship, nostalgia shrouding her senses; she is, in Brontë’s terms, not quite absolutely submissive nor wholly ready to revolt yet. Rosali wrote most of these songs in early 2019 while on a self-imposed two week residency in the hills of South Carolina. The isolation can be felt in the rawness of feeling as she faces her demons, thinking about loss and death, addiction and love; she sounds vulnerable and scarred after it all but also empowered.

Self-doubt begins the record. “Doesn’t it feel like love? Doesn’t it remind you of that?” she asks in ‘Wish’, wishing more than believing the answer to be yes. Rosali’s voice is always excellent. She sometimes sounds determined and resolute, at other points sounding more restrained and uncertain; whichever emotion powers her delivery, though, her vocals are always lush and involving.

The tension comes out sonically too. Much of the album is sparse, considered, mournful. The solemn piano ballad ‘Waited All Day’ captures the static feeling one finds themselves in during the dissolving of a relationship, choosing between coming and going. Ponderous acoustic guitar slows the pace on ‘All This Lightning’ and ‘Whisper’. It’s rugged yet contemplative Americana. The one-two guttural punch of ‘Bones’ and ‘Pour Over Ice’ are when she unleashes fully. The former is all wild blues, raucous and heavy; the latter’s energy is necessitated by its lyrics, Rosali contending with her toxic reliance on alcohol (“Not enough fuel to sustain,” she notes, clearly aware of its damage).

‘Whatever Love’ also later begins harder and harsher, ebullient country rock, before grounding into sweet choral harmonies; it’s a striking balance between sweet and sour, soulful and spiky, a balancing act that Rosali manages throughout the record. Backed as she is by members of the David Nance Group, the instrumentation is illuminating. A mellow slide guitar captures the sadness of ‘Your Shadow’, as she sings, “I was taken with sorrow/ Oh the nights I’ve lain awake/ If you stare into darkness/ Soon you’ll be seeing/ The light start to break.” Elsewhere, a clattering lead guitar smashes through ‘Pour Over Ice’.

Self-doubt closes the record, too. “By and large we’ve kept things together/ By and large we’ve stormed all this weather/ Why the false wildness?… I make my mind up all the time/ Each time it’s different,” she considers in anguish in ‘Tender Heart’, encapsulating the utter folly and unpredictability of decisions of the heart.

Perhaps she will always be plagued by such self-doubt, always in transition. If anything sounds like it will get her to that Brontëan point of ‘determined revolt’, though, it’s this album. There is fear here but there is also fervour. The hauntingly accurate metaphor that Rosali croons soothingly at one point puts it best: “All this lightning ain’t frightening to me.” A future fourth album, one thinks, will be marked by perseverance and growth and, once more, authentic emotion.

Album Review: Rosali, 'No Medium'The title for Philadelphia/Michigan musician Rosali’s third album, No Medium, is taken from the Charlotte Brontë novel Jane Eyre. The full quote from that is helpful in evoking the tension that controls Rosali’s record: “I know no medium: I never in my life have...