Album Review: Sons of Kemet, ‘Black to the Future’ 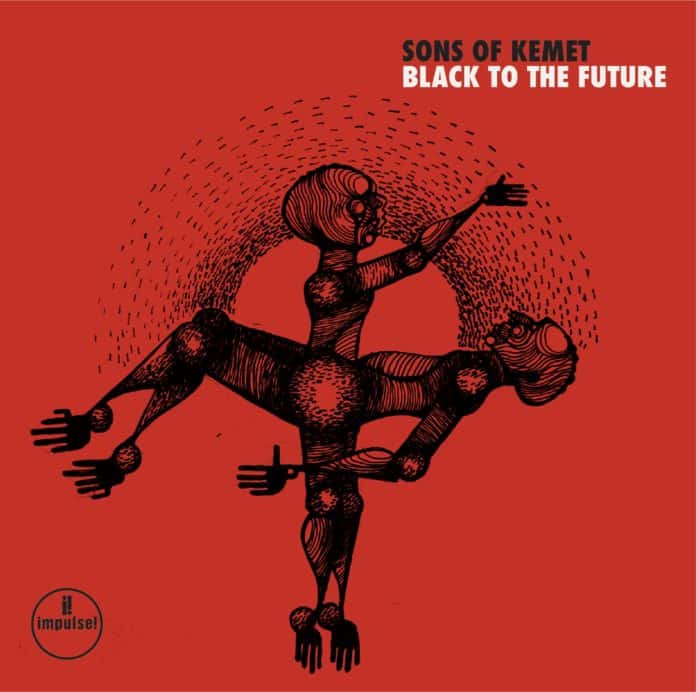 Shabaka Hutchings, the London-born, Barbados-raised multi-instrumentalist whose singular vision and unrelenting spirit have placed him at the forefront of Britain’s vibrant jazz scene over the past decade, last released an album in March 2020. That was with his group Shabaka and the Ancestors, in which he collaborates with South African musicians; his other projects include the cosmic jazz trio the Comet is Coming, featuring Dan Leavers on synths and Max Hallett on drums, and Sons of Kemet, the improvisational jazz quartet whose breakout third LP Your Queen Is a Reptile – their first for Impulse! – earned them a Mercury Prize nomination in 2018. What sets Sons of Kemet apart is both their fervent energy and their unconventional approach to genre, mixing jazz with elements of dub, hip-hop, and dancehall; there’s an undeniable urgency to their music that’s a key component of every one of Hutchings’ projects, but here it’s also informed by a heightened political consciousness that comes through in both their propulsive compositions and conceptual ambitions. Their latest release, Black to the Future, is the most powerful and pertinent expression of the group’s unique dynamic to date.

When the quartet locks into a certain groove, the effect is nothing short of exhilarating: twin drummers Edward Wakili-Hick and Tom Skinner provide a rhythmic backbone that not only gives the music a nervous quality but also makes it feel rooted to the earth, while tuba player Theon Cross casts a heavy, ominous cloud over the proceedings. But it is Hutchings’ layers of clarinet and saxophone that light the fire – SoK’s debut album was fittingly titled Burn – one that takes different forms throughout the duration of the new LP: on the frantic ‘Pick Up Your Burning Cross’, the flames sputter out in front of you as the words of Moor Mother and Angel Bat Dawid hover in and out like a haunting chant.

But it’s on the previous track, opener ‘Field Negus’, that the tension starts to simmer. Poet Joshua Idehen, a frequent collaborator of Hutchings who previously contributed spoken word to Your Queen Is a Reptile, plays an even more vital role here; not only because it is his voice that bookends the album, but because his performance feels more attuned to the language of the music, blending in rather than drawing attention away from its seething core. “You had me saying prayers in your language/ You made me forget your gods, question my spirits, forsake my prophets,” he decries on ‘Field Negus’. “Oh, the audacity, the Caucasity of it all!” His final proclamation, as caustic as it is furious, sets the tone for the rest of the record: “Burn it all, burn it all.”

Your Queen Is a Reptile was notable for being the group’s first album since the 2016 Brexit vote, and its celebration of visionary women of colour often overlooked by history doubled as a condemnation of and radical alternative to the British monarchy. Recorded in the midst of last year’s Black Lives Matter protests in the wake of the killing of Goerge Floyd, Black to the Future is fuelled by a similar sense of purpose: to “redefine and reaffirm what it means to strive for Black power,” as Hutchings writes in the liner notes. And it does so with tenacity and fervour, teeming with joy as well as resentment and sorrow: this, as the album’s title suggests, is not a commentary on current events, but a vision of the future built on the foundations of the past. Though there is a nuanced complexity to the album, it is above all a potent and rewarding piece of work.

Despite the upbeat energy of tracks like ‘Think of Home’ and ‘To Never Forget the Source’, Black to the Future does often see the quartet leaning into a more meditative – but never conventional – groove. The tone of ‘In Remembrance of Those Fallen’ is at once mournful and enchanting, while ‘Through the Madness, Stay Strong’ is as evocative as its title, one of the most transcendent examples of the group’s chemistry. When Idehen’s voice returns on the final track, ‘Black’, it’s not there to fill a void, but acts as a visceral affirmation of what’s already been conveyed in the music: “This Black praise is dance! This Black struggle is dance! This Black pain is dance!”

Album Review: Sons of Kemet, 'Black to the Future'Shabaka Hutchings, the London-born, Barbados-raised multi-instrumentalist whose singular vision and unrelenting spirit have placed him at the forefront of Britain’s vibrant jazz scene over the past decade, last released an album in March 2020. That was with his group Shabaka and the Ancestors, in...