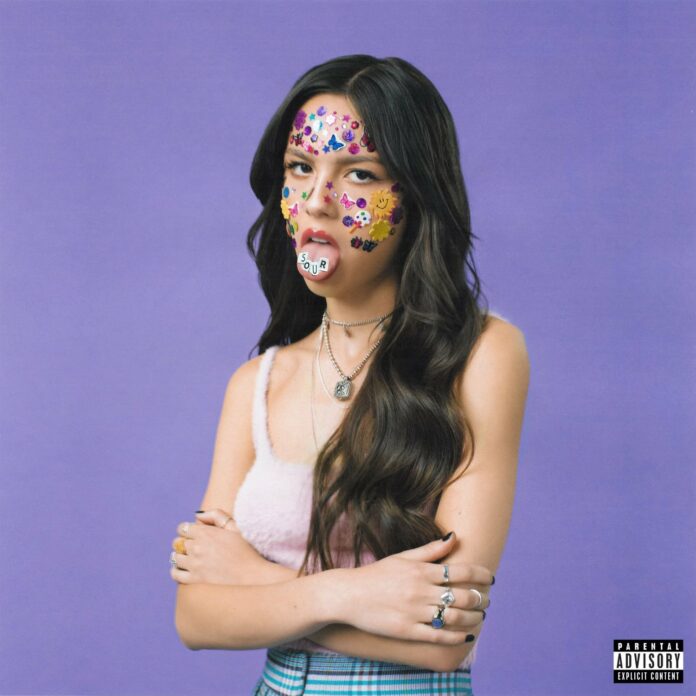 In February, Saturday Night Live debuted a sketch parodying ‘drivers license’, the first song by rising star Olivia Rodrigo; just three months later, she took to that very stage herself as the show’s guest musical performer. Such a supersonic ascension for an artist is a generational thing, and not many have done it quicker than Rodrigo. It’s a well-worn path she’s treading though, one walked by singers like Demi Lovato and Miley Cyrus before her: Rodrigo made her Disney debut at the age of 13 as the guitar-girl Paige Olvera in Bizaardvark, before finding a bigger role in High School Musical: The Musical: The Series (a baffling title surely to the casual observer). One of Mickey Mouse’s most marketable stars of recent years was, one feels, always destined to find her way to music.

It’s just how stupendously quickly Rodrigo has risen to this position that is surprising. ‘drivers license’ immediately broke several records, including making Rodrigo the first non-American Idol female artist to have their first single debut at number one on the Billboard charts since Lauryn Hill in 1998. When ‘good 4 u’ also debuted atop the charts, Sour, her new album, became the first debut album in US history to have two songs debut at number one; these are, in other words, historical numbers.

Going into the entirety of Sour, much of the critical chatter revolved around whether ‘drivers license’ would become a one-hit wonder. The answer is, resoundingly, no. It’s a remarkably assured and focused debut record: The atmosphere is understandably melodramatic and moody, a deliberate mixture of balladry and bombast. It’s when Rodrigo ramps up the tempo that she really comes into her own. The most tearing and loud punk is served right at the start, ‘brutal’ being full of riotous angst. The fast and frenetic anthem ‘good 4 u’ wields righteous anger at her former lover, filled with sardonic little laughs amidst her venomous and sharp singing. In these songs, Rodrigo really embodies the idea of her being Gen Z’s Avril Lavigne, all heartbreak and angst, insecurity and energy.

Elsewhere, swooning ballads abound. Following ‘brutal’ is ‘traitor’, which consists of a weeping acoustic guitar and warm harmonies; towards the end, however, after one too many slowed tracks, things do begin to lag. ‘enough for you’, the piano ballad ‘happier’. and ‘favorite crime’ are too minimalistic to command attention. They were all going to fade in comparison to ‘drivers license’ admittedly anyway: centering on a high school love gone wrong, the song evokes emotions that are timeless and universal; the reckless abandon of falling in and out of puppy love. The bridge is absolutely gigantic, a sweeping mass of unrestrained sadness and sincerity; it will undoubtedly become an omnipresent karaoke choice for years.

It’s clear that Rodrigo fancies herself as a lyricist first and foremost, in the vein of her hero Taylor Swift (‘1 step forward, 3 steps back’ even sneakily gets a Swift songwriting credit in, as it interpolates her song ‘New Year’s Day’). The simple melodies and understated rhythm section in most of the songs allow her fetching vocals to unfurl her relatable and vulnerable words. And this is, above all, a breakup album. The lyrics expound on her former relationship, the songs betraying her anger at the person for their actions and their lack of care. She’s often overwhelmed by thoughts of another girl (‘traitor’ and ‘deja vu’), who Rodrigo’s former lover seemingly chose over her. It’s only in the later tracks that she relents on the bitterness, finding her own form of acceptance: “So find someone great, but don’t find no one better,” she curses on ‘happier’.

“I want it to be, like, messy,” is the very first thing Rodrigo says on the album. She’s setting her stall out early: ‘I’m no normal Disney-produced package,’ she seems eager to ensure the listener. Yet as she drops swear words on ‘brutal’, one can only worry that we are being conned. Perhaps this is an over-correction on Disney’s part, realizing that they couldn’t keep presenting their factory stars in the usual squeaky-clean manner.

Which brings with it other issues. Rodrigo just turned 18 years old in February. Where she goes from here will be fraught with temptation and difficulties. To return to her predecessors again: Cyrus struggled to find her individuality after graduating from a much bigger Disney show in Hannah Montana, going through several warped and weird identities before finding a groove with her current mullet-and-rock style. Lovato fared much worse, going through many off-stage struggles with substance abuse and mental health issues.

Recently we’ve also seen a public reckoning with the mistreatment of arguably the greatest teen star of them all, Britney Spears. New documentaries seem to sprout up each week remembering how badly the media handled Spears at the height of her fame. And while every publication both major and minor that has lasered in on Rodrigo’s rise hasn’t been aggressively toxic in their discourse, it’s important to stress once again: Rodrigo just turned 18 years old in February.

Yet she seems all too aware of the familiar trappings and tropes of Disney stars past. Most of the songs were co-written by Daniel Nigro (formerly of indie rock band As Tall As Lions), but Rodrigo appears to have played the main part in proceedings. There are no guest features to be seen, peculiar for an expensive release from a big label. The raw emotions at play never feel like they were pre-ordained by a motley group of older male executives. “Quit my job, start a new life/ And they’d all be so disappointed/ ‘Cause who am I if not exploited?” she ponders on ‘brutal’, a saddening indictment on the industry that first gave her fame.

When she took to the Saturday Night Live stage that night in May, her presence was undeniable. She combined the haughty but graceful gaze of Mazzy Star’s Hope Sandoval with the ferocious and precocious power of Alanis Morissette (the latter was just 21 when her own seminal album Jagged Little Pill, a clear antecedent, came out). It felt, whether you cared or not, like a zeitgeist moment. Is Olivia Rodrigo unapologetically being true to herself? Is this a carefully-crafted persona by the Disney hierarchy? Such is the forceful quality of the album that it probably doesn’t matter either way. It’s messy and moody, excitable and unrefined, but as she makes her way into pop’s pantheon, there’s undeniably lots of promise for the future.