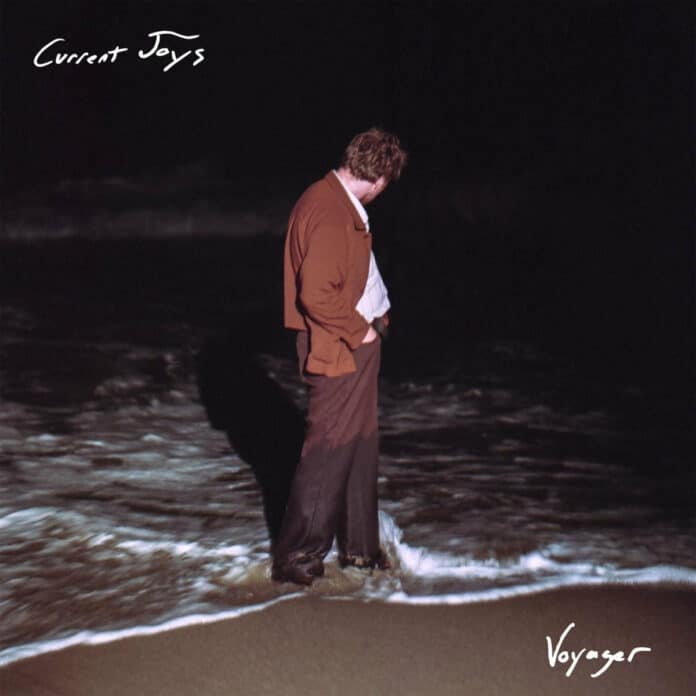 Nick Rattigan, it often feels like, is a filmmaker trapped in the body of a musician. Formerly a production assistant in the film industry, his songs under the Current Joys moniker often reference films: on his latest album Voyager, there are songs named after the works of Lars von Trier (‘Dancer in the Dark’, ‘Breaking the Waves’), Agnès Varda (‘Vagabond’), Ken Russell (‘Altered States’), and Andrea Arnold (‘American Honey’).

As both Current Joys and his other project Surf Curse, much of Rattigan’s recordings are decidedly lo-fi, belonging to that style of bedroom pop that so permeated the previous decade. He always sounded like he yearned to explode out of this trapping though, and Voyager brims with a fuller sound to satiate his widescreen cinematic tendencies. The songs are often layered as if they’re ready to soundtrack an independent film: swooning accompanying strings here (‘Altered States’), melancholic piano lines there (‘Amateur’).

‘Dancer in the Dark’ is just a few letters removed from a famous Bruce Springsteen song, and Rattigan sounds like he’s aiming for a Springsteenian relentless momentousness in the track. Much of Voyager recalls indie rock that flourished in the early noughties, with Rattigan’s warbling and sincere vocals sounding like an impression of Arcade Fire’s Win Butler, particularly on the dance-punk of ‘Money Making Machine’.

Some songs are unflinching in their gaze inwards at Rattigan’s mental precarity. He sounds distressed and overwhelmed on ‘Naked’, backed by a necessitated rushed rhythm, his voice full of panic as he screams “Don’t let go of me”; he’s similarly anguished on ‘Altered States’, seemingly discussing self-harm. ‘The Spirit or the Curse’ seems to be about the inner battles with anxiety, and the sparse acoustic instrumentation allows the emotions to flow out uncontrollably.

Elsewhere, though, he comes off as slightly creepy. “Miss my Valentine/ I can’t breathe when you’re not mine,” sounds like the last words of a stalker; the line, “I wear her photograph against my heart/ For in my life she plays a starring part/ Of alcohol and cigarettes,” is equally alarming when he says it on ‘Shivers’. When it descends into sappy sentimentality, the album gives the impression of Rattigan as a quintessential ‘softboi’; the type who invites you over to his house to view his Criterion film collection because “you’ve probably never heard of Varda or Tarkovsky before.” Indeed, many of the songs, particularly ‘Rebecca’, ‘Vagabond’, and ‘Amateur’, are suffocatingly lovelorn (“You’re every song I love, can’t get away from,” he sings on the latter.) (It should be noted that there have been multiple allegations of sexual misconduct against Rattigan in the past; that Secretly Canadian still decided to sign him for Voyager leaves one questioning their veracity.)

Rattigan evidently wants this album to feel grand and epic, but with over 16 tracks, it wears thin. It’s ‘Voyager Pt. 1’ and ‘Pt. 2’ that are the essence of Current Joys: solemn and melancholic, sad and melodic; the emphasis is on emotion above technical matters. Just look at the album cover, Rattigan standing seriously on the beach at night, staring longingly at the rolling waves stretching into the pitch-black darkness; if anyone were to be convinced by the myth of the tortured artist, it would be him. His brand of rock might be overtly sentimental, but it doesn’t always come off as a bad thing: There’s still enough exemplary existential narratives, sincere lyrical vulnerability, and light nostalgic touches within Voyager to give merit to Rattigan’s music.

Album Review: Current Joys, 'Voyager'Nick Rattigan, it often feels like, is a filmmaker trapped in the body of a musician. Formerly a production assistant in the film industry, his songs under the Current Joys moniker often reference films: on his latest album Voyager, there are songs named after...