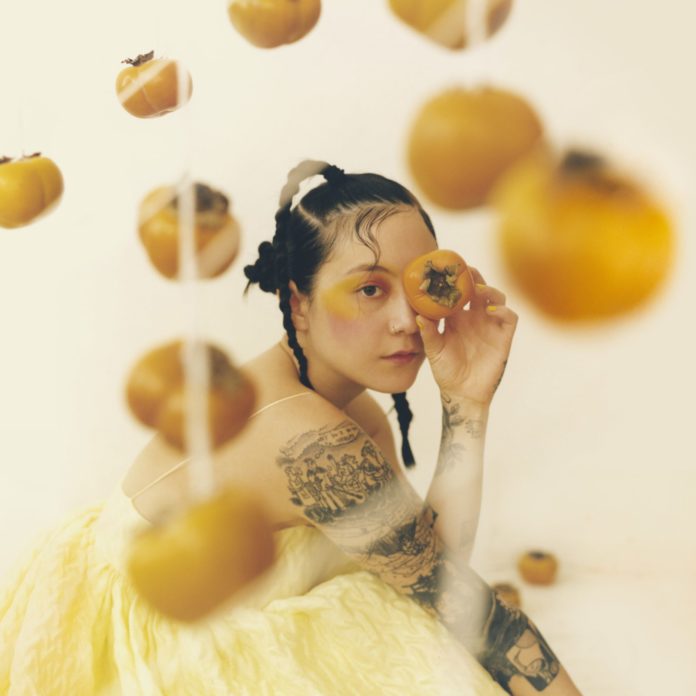 The opening track of Japanese Breakfast’s new album, Jubilee, is named after Satoshi Kon’s surreal anime film Paprika, but it also calls to mind another one of the Japanese director’s masterpieces, Perfect Blue. A haunting meditation on the violent consequences of fame and celebrity culture, the 1997 thriller follows a 21-year-old pop idol who finds herself stalked by an obsessed fan and starts to lose her grip on reality. While not nearly as gory or complex as that film, Japanese Breakfast’s ‘Paprika’ also kicks off by blurring the line between fantasy and reality as Michelle Zauner sings about trying to connect with people through her music: “How’s it feel to stand at the height of your powers/ To captivate every heart?/ Projecting your visions to strangers who feel it, who listen, who linger on every word,” she sings before quickly answering her own question: “Oh, it’s a rush!”

And sure, it’s meta, and a little bit messy, but it also is a rush. Rather than hinging on the lingering threat of creative stagnation hinted by the previous lines, Zauner leans fully into the pure euphoria of the moment, capturing the cathartic joy of collective attention: she reaches a higher register as if to project those triumphant words into the sky, her vocals soaring over an ebullient horn and string section reminiscent of early Beirut. This sprawling canvas stretches out over the rest of the record, which retains that buoyant energy while zeroing in to explore the nuances of these big, sweeping sentiments. There’s a touch of that ambivalence on the following track and lead single, the infectious ‘Be Sweet’, but that’s not enough to overshadow the fact that it’s a straight-up disco tune (if ‘Paprika’ was inspired by Susumu Hirasawa’s Paprika song ‘Parade’, then this is more in line with ‘Angel of Love’ from the Perfect Blue soundtrack).

Zauner co-wrote the song with Wild Nothing’s Jack Tatum with the intention of having someone else sing it, but unlike a certain pop hit written by another high-profile indie artist, it’s now impossible to imagine someone else performing it. Though far from a flawless vocalist, Zauner’s inflection here is perfect, and the song takes on a powerful resonance in the context of her discography. There’s one thing she does in particular – and it’s not ground-breaking, or revelatory, or even slightly strange by pop standards – but the way she goes from “I wanna believe in you” to “I wanna believe in something” is utterly captivating; sidestepping the I, landing on believe, then taking a leap on something, as if her plea for affection and understanding invokes in her an almost cosmic yearning.

In 2014, Zauner lost her mother to pancreatic cancer, and her first two albums, 2016’s Psychopomp and 2017’s Soft Sounds from Another Planet, grappled with the effects of her grief and PTSD, something she further explored in her debut memoir Crying in H Mart. Jubilee, then, marks a new chapter in her artistic trajectory: Zauner has said it’s about “the joy of creation,” but the more fitting part of that quote is that it’s “a record about fighting to feel.” It’s that fight I hear ballooning in significance on ‘Be Sweet’. On ‘Slide Tackle’, the best the 1975 song not by the 1975 since last year’s ‘I Know Alone’ by HAIM, Zauner directs those demands expressed on ‘Be Sweet’ inwards, battling her demons so she can embrace that desire to feel – and essentially, be – good. By comparison, it feels like an enormous task.

The laidback instrumental cleverly belies the heaviness of the song, but as those synth textures unspool on the lush ‘Posing in Bondage’, that loneliness becomes inescapable. At this point, the colourful spark of the opener is starting to look more like an ominous cloud. Then, ‘In Hell’ uses the contrast between sound and subject matter to devastating effect: Originally a bonus track on the Japanese deluxe edition of Soft Sounds, the song was written about having to put down her family dog, but also reflects the darker feelings of helplessness that come with watching a loved one die a slow and painful death. “Hell is finding someone to love and I can’t have you,” she belts, and the synth melody that follows feels not jubilant but jarring. For a song with such a steady build-up, its dissolution feels like a moment of early defeat.

In between those strikingly earnest and personal moments, Zauner grounds her writing by delving into fictional narratives that give the album an air of playfulness. ‘Kokomo, IN’ is a tender and nostalgic song about adolescent love, reveling in a sweetness the rest of Jubilee has a tendency to complicate. On the other end, ‘Savage Good Boy’ sees her assuming the role of some kind of capitalist villain; it would feel a little bit out of place if Zauner wasn’t such an expert at conveying complex relationship dynamics through fantastical scenarios, the kind that – in this case – obliquely mirror the psychotic violence of those Satoshi Kon films.

In fact, if Zauner wanted to craft a convoluted, self-referential narrative about the dark underbelly of stardom or really anything else, the rest of her discography (and self-directed videos) proves she easily could. Even the guitar solo that takes up half of the closing track, ‘Posing in Cars’, is a story unto itself. Hell, if you really wanted to pick the record apart, you could draw a line between ‘Be Sweet’ and the first song on Psychopomp, ‘In Heaven’ (to say nothing of the title), in which she cries out: “Oh, do you believe in heaven like you believed in me?” But Jubilee’s greatest achievement is that it evokes a layered struggle without undermining the celebratory power of simply carving out your own path. It has everything Zauner knows a third album should – confidence, ambition, perspective – without drowning in its own glory, and the result is her richest, most rewarding work yet.

The word unsee appears twice on Jubilee, first on ‘Posing in Bondage’ and then on ‘In Hell’; both times, it’s negatively charged, about how we’re forced to bear the weight of our experiences all our lives. On ‘Posing in Bondage’, it comes right before what might be the album’s most quotable line: “When the world divides into two people/ Those who have felt pain/ And those who have yet to,” but it’s the “I can’t unsee it” that stings the most. No matter which camp you fall into, you might find yourself in a similar situation after listening to this record – whatever it actually is. Jubilee may start out with a song about the pressures of being “at the center of magic,” but Zauner makes you feel a part of it, seen regardless of how much you’ve endured or where you’re coming from. Now, that’s a rush.

Album Review: Japanese Breakfast, 'Jubilee'The opening track of Japanese Breakfast’s new album, Jubilee, is named after Satoshi Kon’s surreal anime film Paprika, but it also calls to mind another one of the Japanese director’s masterpieces, Perfect Blue. A haunting meditation on the violent consequences of fame and celebrity...