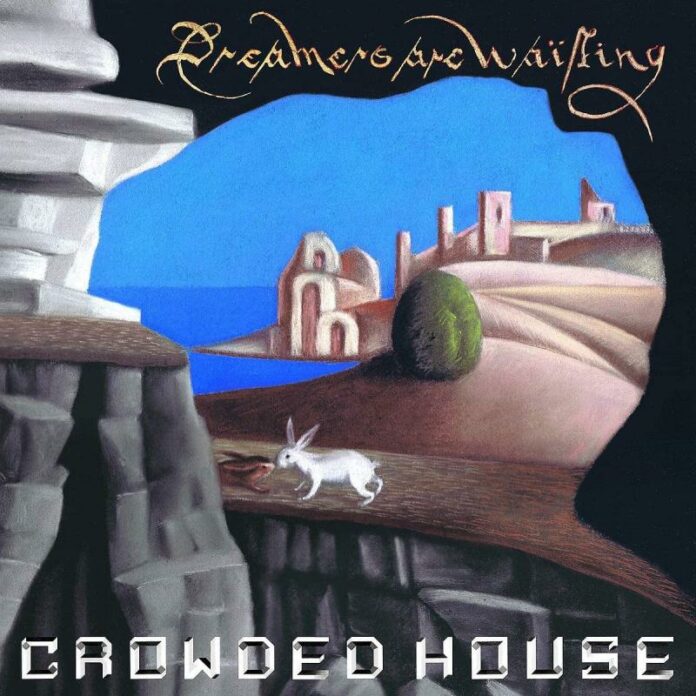 Who had old New Zealand/Australia pop rock band Crowded House returning with a new album on their 2021 bingo card? Us neither. It’s been over a decade since we last heard from the beloved outfit, but that time hasn’t dulled their infectious spirit or keen ear for melodies. Nor has the public’s appetite for their pleasing sound disappeared: the band are currently on track to earn a top five finish in the UK album chart for their seventh studio album, Dreamers Are Waiting.

For a band who have been going in some form since 1985, listeners shouldn’t be expecting to be challenged by Crowded House, and most of the record is merely pleasant and amiable. Perhaps it comes down to them being a full-on family affair now: Neil Finn’s son Elroy is on drums, his other son Liam is on guitar and backing vocals; although not technically a Finn, Nick Seymour is also back on bass, the other remaining founding member. Their old producer Mitchell Froom rounds out the collective on keyboard. It’s why the songs bounce with enhanced harmonies and interplay, everyone feeling comfortable with who they’re surrounded by.

Now aged 63, Neil doesn’t sound ready for retirement just yet. He’s always possessed one of the most disarmingly sweet and soulful pop voices and it’s undiminished here. Whether finding a softness for lovelorn lines or delivering with gusto the more upbeat numbers, his voice is still resoundingly dependable. There are no outright failures in Dreamers Are Waiting. ‘Bad Times Good’ is a simple and understated opener, and ‘Deeper Down’ could have perhaps been a more memorable closing song. ‘Too Good For This World’ is also a bit timid instrumentally.

When Neil lets it all go though, relishing in the fun of playing with his family and friends again, the other songs take off. ‘Playing with Fire’ is relentlessly hooky, a stomping standout. The swaying ‘To the Island’ plays like a sly ode to New Zealand, famously the land of Neil’s birth: “The world is beyond us/ It’s too enormous/ But oh, the island is just right/ It’s the perfect size,” he insists; given how well PM Jacinda Ardern handled the coronavirus pandemic over there compared to certain other countries, he might actually have a point.

Elsewhere, the lyrics display the viewpoint of an elder statesman, a world-weary man. “The next generation’s talking/ We’re behind the wheel/ We’re driving straight into the wall,” Neil sighs in ‘Playing with Fire’; “This is not right, this man is a fake/ But they will follow him down to the edge of the cliff/ And if he tells them to jump/ They will jump right in,” he lambasts in ‘Whatever You Want’. It’s not gripping commentary, but it’s endearing in its attempted pointedness. Liam is given songwriting credits for two of the middle songs, ‘Show Me the Way’ and ‘Goodnight Everyone’, and the former is particularly solid, containing sweet words about backing up family in a time of crisis.

At this stage in Neil’s life, nothing Crowded House do is likely to reach the quality of their classic run of records from the late ’80s and early ’90s; pop has always been a young man’s game. But the innate understanding of pop aesthetics remains, the effortless melodies still pour out seemingly at will. Dreamers Are Waiting isn’t going to bring the band a wealth of new fans, but their return will be a welcome sound to those who have been following them all these years. “There’s a battle ahead/ Many battles are lost/ But you’ll never see the end of the road/ While you’re traveling with me,” they sang in their seminal 1986 anthem ‘Don’t Dream It’s Over’; listening today, it certainly seems that way.

Album Review: Crowded House, 'Dreamers Are Waiting'Who had old New Zealand/Australia pop rock band Crowded House returning with a new album on their 2021 bingo card? Us neither. It’s been over a decade since we last heard from the beloved outfit, but that time hasn’t dulled their infectious spirit or...