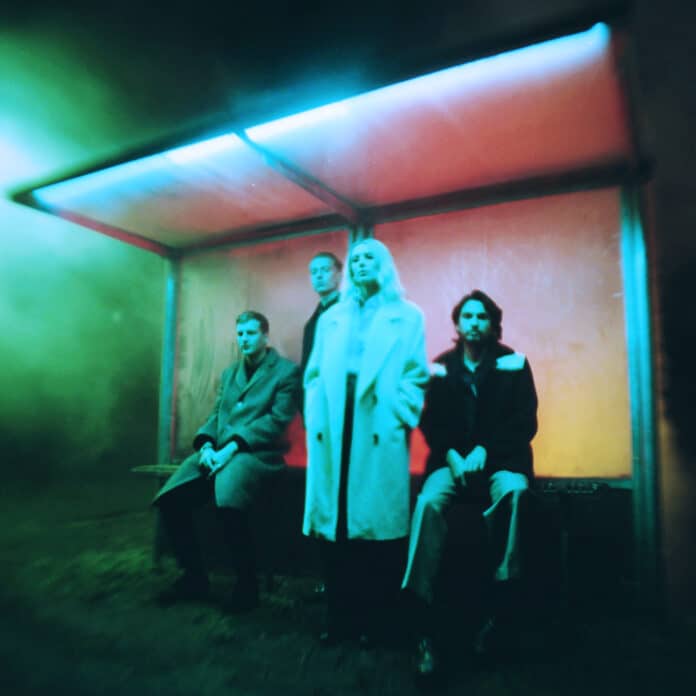 Wolf Alice’s new album sounds more or less exactly what you would expect the follow-up to 2017’s Mercury Prize-winning Visions of a Life to sound like. Intent on reconnecting with their roots while reinvigorating their already expansive sound, the north London group recruited producer Markus Dravs, whose work with the likes of Coldplay and Arcade Fire made him the perfect fit for their third LP, a grand and cinematic effort replete with huge hooks, skyward vocals, and sparks of emotional vulnerability. Once again deftly channeling their ‘90s influences into a dynamic blend of shoegaze, grunge, and folk-rock, Blue Weekend boasts moments of undeniable brilliance, even if a significant portion of the record feels inconsequential and unnecessarily polished, brimming with textures and ideas but not always nuance or subtlety. This level of refinement is both a natural step in the band’s trajectory and a bold reminder of their status as one of the world’s biggest acts, but it can also end up drowning out some of the volatile intensity of their earlier work.

At its best, though, Blue Weekend amplifies the qualities that have always been essential to the quartet’s DNA. Give any other contemporary alternative band the same budget, and chances are they’d struggle to come up with such magnificent and anthemic results; Wolf Alice’s sprawling ambition was evident from their 2015 debut Love is Cool. ‘Smile’ proves they’ve all but abandoned their more raucous tendencies, fuelled by the kind of righteous angst that runs through much of the record; ‘Play the Greatest Hits’ is by far the wildest cut here, a riot grrrl-esque blast of energy with such a distractingly impeccable sense of control that it pales in comparison to its Visions of a Life equivalent ‘Yuk Foo’. Elsewhere, the band’s commanding performances and propensity for arena-sized choruses largely pay off: the album’s longest tracks, ‘How Can I Make It OK?’ and the euphoric ode to self-love, ‘Feeling Myself’, are also its most memorable, building to captivating crescendos.

But the band’s razor-sharp focus and commitment to formula also lead to some less impactful moments. Tracks like ‘Lipstick on the Glass’ lack a strong sense of direction, while the finger-picked folk of ‘Safe From Heartbreak (if you ever fall in love)’ is too lightweight to leave much of an impression, especially compared to the late-album piano ballad ‘The Last Man on Earth’. Though sometimes relying too heavily on vagueness, Ellie Rowsell’s lyrics are as introspective as ever, but also considerably more direct and narrative-based. Those qualities can sometimes get lost in the opulent haze of the production, as on the lyrically excellent ‘Delicious Things’, but they shine on the uncompromising ‘Smile’: “I am what I am and I’m good at it/ And you don’t like me, well that isn’t fucking relevant,” Rowsell proclaims.

It’s her assured and versatile delivery, ranging from a whisper to a scream, that often makes all the difference: the word feeling, for instance, comes up a lot, but it’s Rowsell who imbues it with a particular connotation. When the instrumental accommodates her intimate storytelling on ‘No Hard Feelings’, the effect is both lovely and stirring, making platitudes like “Life can be short, but life can be sweet” feel like a gut-punch, her voice nearly faltering at the end. Because her writing can be light on specifics, the image of “crying in a bathtub/ To ‘Love Is A Losing Game’” that follows is especially wrenching.

Blue Weekend could use a few more surprises, but there’s no doubt Wolf Alice have managed to live up to the massive hype yet again. (It’s currently the highest-rated album of the year on Metacritic.) They certainly have both the ambition and the skills to make an even bigger move in the future, but if their latest release is any indication, that might have the effect of diluting the underlying tension and anxiety that has made their best material stand out. One of the album’s sharper lines arrives on ‘Delicious Things’, a commentary on success and the hedonistic joys of Los Angeles: “Extravagance disguised as elegance is boring.” The ambiguity of the track is alluring and honest, but there’s a sense the band might be ignoring their own advice here (“We do like making songs with loads of shit in it,” drummer Joel Amey said in an interview). None of the extravagance on Blue Weekend seems like a disguise, though, and Wolf Alice still find ways to make it all feel exciting.

Album Review: Wolf Alice, 'Blue Weekend'Wolf Alice’s new album sounds more or less exactly what you would expect the follow-up to 2017’s Mercury Prize-winning Visions of a Life to sound like. Intent on reconnecting with their roots while reinvigorating their already expansive sound, the north London group recruited producer...